Nehemiah Gordon from Jerusalem, Israel compiled the following New Moon Report for the month of July and the beginning of the 5th month on the Hebrew calendar (Av).

“On Thursday July 11, 2002 the New Moon was sighted from Jerusalem.  The moon was first sighted by Nehemia Gordon at 19:57; by Roy Hoffman at 19:58; by Devorah Gordon at 20:00; by Shirelle Twito at 20:01; and by Jonathan Hoffman at 20:13.  The moon was also observed by numerous other observers from other locations around Israel.”

It is expected that the next New Moon will become observable from Jerusalem near sunset on August 9.  If it is visible, then sunset August 9, 2002 will be the beginning of the 6th Hebrew month, Elul.  At that time, the moon will be in conjunction with the star Regulus the king star of the constellation Leo the lion, or Arieh in the Hebrew.  This constellation is the tribal symbol of Judah.  Chart 282 shows the position of the moon and the star Regulus shortly after sunset as seen from Jerusalem looking west on August 9, 2002.  The moon will be just over 1% illuminated on August 9, and in case of it not being visible because of atmospheric conditions, the first day of the month would then default to sunset August 10.

It was shortly after Solomon’s reign over Israel that the nation was divided into the northern and southern kingdoms, though there were certainly rifts between the two factions during his reign.  The northern kingdom, which was made up of 10 tribes of Israel, was called Israel and later Ephraim.  (Ephraim was given the firstborn right of Joseph by Jacob. The firstborn birthright and promised blessing of Yahweh to Abraham was handed down to Isaac, then to Jacob, who passed it to Joseph and then to Ephraim).   The southern kingdom was called Judah, and was made up of the tribes of Judah, Benjamin, and most of the Levites.  So here we have the two houses, the House of Judah and the House of Ephraim (Israel).  This becomes particularly interesting when considering that each of the 12 tribes had their own tribal symbol taken from one of the 12 signs of the Zodiac, which were borne on their standards when they were in the wilderness.  But the Temple that Solomon built had only two tribal symbols, the lion (Arieh), which is the tribal symbol for Judah and the bull (Taurus) which is the tribal symbol for Joseph (Ephraim).

The following is from Francis Rolleston’s Mazzaroth (1862), First Part, p.12

“It is not known how the ancient Hebrews figured the signs, except by the blessing of Jacob and that of Moses; but from these records it is evident that animal and even human forms were on the banners of Israel — the Man that of Reuben, the Lion borne by Judah, the Bull by Joseph, the Eagle or the Basilisk by Dan. Balaam also evidently had the Lion of Judah before his eyes. Moses, speaking after the giving of the second commandment, dwells on the Lion of Judah and the Bull of Joseph without disapprobation. It was, therefore, the worshipping of these "likenesses" that was forbidden. The Jews in after times, warned by the idolatry of their forefathers, are said to have abstained from making any "likenesses" whatsoever; and the early Arabs are said to have followed their example. In the temple of Solomon, besides the consecrated cherubic images, there were pomegranates and flowers of lilies and palm-trees, but no animal likenesses, except the cherubic lions and oxen. There is here a proof that not the making of the likeness, but the worshipping it was the sin. Israel had been punished for desiring the golden calf to go before them, but Solomon was unblamed for forming the twelve oxen that upheld the molten sea.”

It is that time of the year again for the Perseids Meteor Shower.  The Perseids Meteor Shower is the most popular meteor shower for the general populous since it occurs in the warm month of August and usually puts on a good show.  The shower generally starts around August 6 and runs through about August 18.  The peak of the shower is always on August 12. 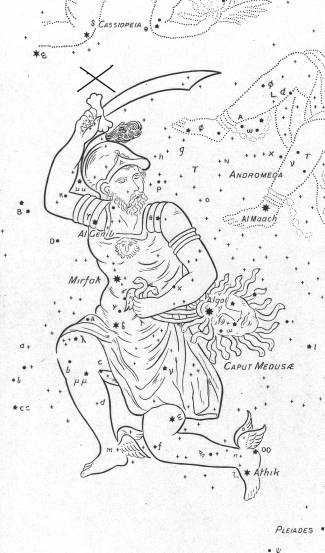 The constellation Perseus or Peretz (the breaker) in Hebrew, represents Messiah coming to deliver the captive bride (Andromeda), the houses of Judah and Ephraim (Israel).

The following is from an article in the Sky and Telescope website which was written by Roger W. Sinnott.

A Great Year for the Perseids – “The thin crescent Moon sets early on the evening of August 12th, leaving the sky fully dark for this year’s Perseid meteor shower. The display should peak later that night for observers throughout the Northern Hemisphere, especially as morning twilight begins. That’s when the radiant (the patch of sky between Perseus and Cassiopeia from which the Perseids appear to come) is highest in mid-northern latitudes. Sky-watchers can expect to see 60 or more Perseids per hour, provided the sky is very clear and dark.

If you miss the Perseids that night, all is not lost. The shower lasts for two weeks or so, with excellent rates in the predawn hours of August 10th through 15th. Far fewer meteors will appear before midnight, even on the night of the shower’s maximum, because the radiant is then quite low in the sky. The radiant is always low or below the horizon for countries like Australia, New Zealand, and South Africa, where few, if any, Perseids can be seen.

The 1992 return of Comet Swift-Tuttle, parent comet of the Perseids, brought with it a “new peak” that was superimposed on the shallower, traditional Perseid maximum. By 1999, however, the new peak had greatly subsided and it's completely missing from first-look analyses of the 2000 and 2001 Perseids by the International Meteor Organization. So the forecast for 2002 reads much as it would have in the 1980s: the Perseids should peak for 12 hours or more, centered on the time when the Sun’s ecliptic longitude is 140.0° (equinox 2000.0). That translates to 22h Universal Time on August 12th this year. European observers are optimally positioned for the Perseid peak, but North Americans are not far behind.”

As you have most likely seen on the news lately, there have been a number of headlines featuring close approaches of asteroids to the earth in the near future.  The below articles are of two such asteroids recently discovered and mentioned in the media.  So far there are no imminent impacts that we are aware of.

Hefty Asteroid to Sweep Near Earth

July 22, 2002 | “Next month a newly discovered asteroid will pass close enough to Earth to be easily spotted in small telescopes and even binoculars. According to calculations by Gareth V. Williams, associate director of the Minor Planet Center in Cambridge, Massachusetts, the asteroid's August 18th flyby should bring it to within 530,000 kilometers (330,000 miles) of Earth, just outside the Moon's orbital distance.

Astronomers first detected this object, designated 2002 NY40, on July 14th with the 1-meter LINEAR telescope in New Mexico. Thus it was picked up a full month before brushing by Earth, unlike asteroid 2002 MN, whose pass well inside the Moon's orbit was not realized until several days after the fact. The best current estimates suggest that this new interloper is about 500 meters (0.3 mile) across — significantly larger than 2002 MN.                                                    Still quite faint at magnitude 18, 2002 NY40 is making a very tight loop around the star Beta Aquarii. During the next few weeks it will brighten tremendously and yet remain almost motionless in the sky — the eerie signature of an asteroid hurtling right toward Earth! On the night of Saturday, August 17th, 2002 NY40 should reach magnitude 9.3 when well placed for viewing from North America. At that time its angular velocity will exceed 4 arcminutes per minute, a motion easily perceptible in small telescopes. Sky & Telescope plans to issue detailed observing instructions, through AstroAlerts and SkyandTelescope.com, in the days leading up to this rare event.                        A mere 24 hours after it goes by, the asteroid plunges hopelessly beyond reach of Earth-based telescopes as it heads closer to the Sun. (We will then be viewing its unilluminated side, which explains why it becomes so faint, so fast.)                While there is no danger of 2002 NY40 striking Earth during this flyby, a future impact has not been ruled out. Both NEODyS, operated by the University of Pisa, and NASA's Near-Earth Object Program have identified a number of very close encounters in the years to come. These occur either around August 18th as the asteroid heads in toward the Sun, or near February 14th when on its way out. Both agencies are focusing on a flyby just 20 years from now (on August 18, 2022), when there appears to be a 1-in-500,000 chance of an impact — extremely unlikely, but worrisome just the same.            Meanwhile, professional astronomers are gearing up to make the most of this encounter. "2002 NY40 is a potentially very good radar target," notes Michael Nolan (Cornell University). He urges advanced amateurs to obtain detailed photometry of the asteroid on the nights leading up to the flyby. A good light curve, revealing the object's rotation rate, would help in selecting the radar instrumentation to be used with the 1,000-foot dish at Arecibo, Puerto Rico.”

Chart 283 shows the path of the asteroid at its closest approach fly-by between 12:07 and 23:07 Universal Time on August 18, 2002.  The asteroid will be at its closest distance to the earth around 17:00 UT when it will be in the constellation Serpens Caput which is the serpent that Ophiuchus is struggling with.

The ancient names for Cancer (see Chart 284) suggest that it represents a place of shelter or safety for cattle folds or sheepfolds, such as a coral or sheep pens.  The star names in this constellation suggest the same.  The star cluster in the center of the Sign is called Praesepe, which means a multitude, offspring.  The brightest star in Cancer is Tegime, which means holding.  The next brightest star is Acubene, which means in both Hebrew and Arabic, sheltering or hiding-place.  Other stars are Ma’alaph (Arabic), assembled thousands; Al Himareim (Arabic), the kids or lambs.

This constellation represents a place of sheltering or safety for all the sheepfolds of Messiah, which includes both houses of Israel.  And in the midst of this constellation and on the north side and south side of Praesepe there are two stars, one named Asellus Boreas, the northern Ass; and the other named Asellus Australis, the southern Ass.

The symbol that now represents Cancer, a, stands for these two asses.

This connects the sign with the Tribe of Issachar, who is said to have borne upon the Tribal standard the sign of two asses.  We can see from Jacob’s blessing in Genesis 49:14 the interpretation of the real meaning to the constellation Cancer.

“Issachar is a strong ass,

Couching down between the sheepfolds;

And he saw a resting-place that it was good;

And the land that it was pleasant;

And he bowed his shoulder to bear,

And became a servant under task work.”

“Yissakhar is a strong donkey

lying down in the sheep sheds.

On seeing how good is settled life

and how pleasant the country,

he will bend his back to the burden,

and submit to forced labor.”

It is thought by some that Yahweh or Yahshuah will give, or has already given, a certain burden to the tribe of Issachar in bringing the two houses of Israel back together again during the last days.  Since in some areas both houses are still at each other’s throats, this may prove to be quite a burden.  But in Messiah all things are possible.

Until next month and beyond, Yahweh bless you in His super-abundance of grace, mercy and love through His son Yahshuah HaMashiach.  The grace of the Lord Jesus Christ be with you all.