July Report - “On Sunday July 18, 2004, the New Moon was sighted from Jerusalem by Melekh ben-Ya’aqov, Rivka Michaeli, Nehemia Gordon, and Devorah Gordaon all at 20:12.”

The next New Moon beginning the first day (Day of Trumpets or Yom Teruah) of the seventh month on the Hebrew calendar, the month of Ethanum (also known as Tishri) is expected to be visible from Jerusalem near sunset on September 16.

It is that time of the year again for the Perseids Meteor Shower.  The Perseids Meteor Shower is the most popular meteor shower for the general populous since it occurs in the warm month of August and usually puts on a good show.  The shower generally starts around August 6 and runs through about August 18.  The peak of the shower is usually on August 12.

The constellation Perseus or Peretz (the breaker) in Hebrew, represents Messiah coming to deliver the captive bride (Andromeda), the houses of Judah and Ephraim (Israel).

This ties in with Micah 2:12, 13 – I will surely assemble, O Jacob, all of thee; I will surely gather the remnant of Israel; I will put them together as the sheep of Bozrah, as the flock in the midst of their fold: they shall make great noise by reason of the multitude of men.  THE BREAKER (parats) is come up before them: they have broken up, and have passed through the gate and are gone out by it: and their king shall pass before them and the LORD on the head of them. (KJV). 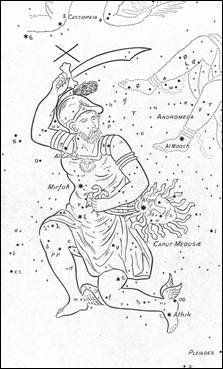 Again, Peretz portrays Messiah rescuing His bride (Andromeda or Sirra in the Heb. which means the chained) from the beast from the sea (Cetus).   And the sparks will fly.

VENUS AND SATURN IN CONJUNCTION

The planets Nogah (Venus – the bright and morning star) and Saturn (Satan), will come into conjunction in the sign and constellation Gemini on August 31/September 1, 2004.  The date of conjunction depends on which time zone you are in.  Chart 370 shows the positions of the two planets in Gemini as seen from Jerusalem above the East-Northeast Horizon at the time of conjunction at 3:30 a.m. Jerusalem Daylight Savings Time on September 1, 2004.  The two planets will be close to each other and be visible in the early morning sky from most areas on planet Earth. 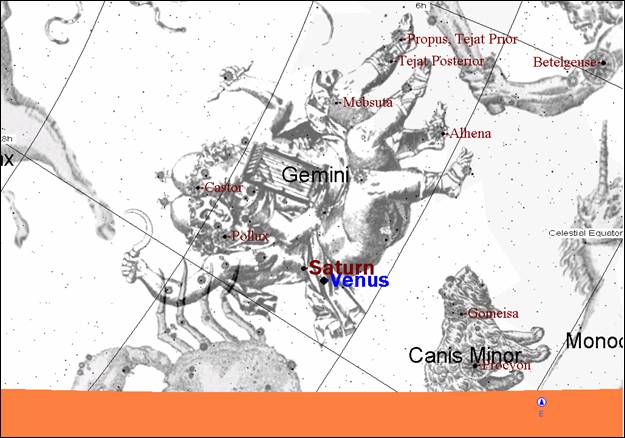 Nogah will be at its brightest magnitude at   –4.31 during its current apparition on August 16, when it will reach its greatest elongation from the sun.  When it comes into conjunction with Saturn on August 31 or September 1, Nogah will still be very bright at a magnitude –4.22 and will far outshine Saturn, which will be at magnitude 0.22.  Nogah will be over forty times brighter than Saturn at that time.

The main theme of the sign and constellation Thaumim (Gemini) is Messiah’s Reign as Prince of Peace.

Comet LINEAR 2003 K4 is now approaching naked eye brightness.  Its current magnitude is around 6.1 and it may brighten to a magnitude 5 (visible to naked eye, but appearing very dim) by early October and stay around that magnitude until early November.  The comet should be at its brightest magnitude during the Feast of Tabernacles in early October.

Chart 371 shows the path of the comet from August 1, 2004 to November 11, 2004.  The comet is now in the constellation Coma (the desired of all nations – the born Messiah).  It will pass through the midst and across the womb of Virgo (Bethulah) – The Promised Seed of the woman in mid September at the time of Yom Teruah, the Day of Trumpets (birth date of Messiah). 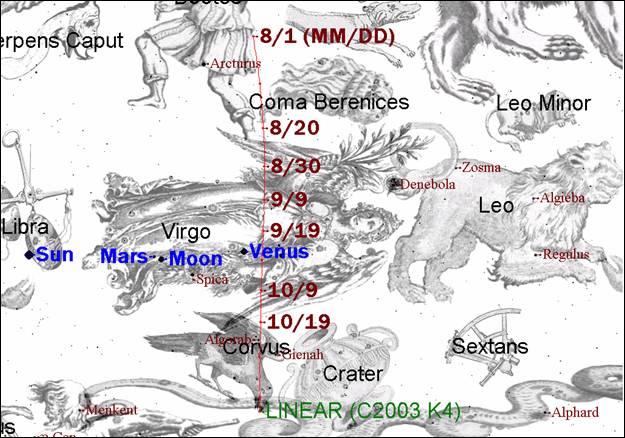 After passing through Bethulah, Comet LINEAR 2003 K4 will pass through the constellation Corvus (The Raven), which represents birds of prey devouring the serpent (Rev. 19:17-21).  On November 11, the comet passes down through the beak of the raven and to the point where the beak meets the back of the serpent.  This is a unique sign for Veteran’s Day with the raven tearing the enemy to pieces. 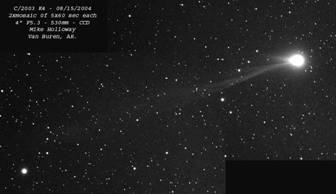 There will be more on this comet in the upcoming September/October 2004 issue of Biblical Astronomy along with other interesting celestial events occurring in Bethulah at that time.

Eta Carinae is a very unique star that is located in the rear section of the constellation Argo (the Ship).  This star is now putting out the energy of five million suns.  Many astronomers believe that it will go super-nova or even hyper-nova some time in the near future.

If this star goes hyper-nova, it very well could be bright enough to be seen in the daytime. It is too far south to be seen from Jerusalem. It is visible from southern Florida and Hawaii from January to April. An excellent place to observe this star is from New Zealand. If the star goes hyper-nova, it may be worth the investment to travel to a good observing spot. The last exceptionally bright supernova, which was Kepler's Star, occurred in the constellation Ophiuchus in 1604,. It may be some time before another one occurs.

"This is the celebrated ship of the Argonauts, of which Homer sung nearly ten centuries be fore Christ. Sir Isaac Newton puts the expedition of the Argonauts shortly after the death of Solomon (about 975 B.C. Whatever fables have gathered round the story there can be no doubt as to its great antiquity. Some think that the story had its origin in name, as well as in fact, from the Ark of Noah and its mysterious journey. All that is clear, when divested of mythic details, is that the sailors in that ship, after all their dangers, and toils, and battles were over, came back victorious to their own shores. The "golden fleece," for which the Argonauts went in search, tells of a treasure that had been lost. "Jason," the great captain, tells of Him who recovered it from the Serpent, which guarded it with ever-watchful eye, when none else was able to approach it. And thus, through the fables and myths of the Greeks, we can see the light primeval shine; and this light, once seen, lights up this Sign and its constellations, so that their teaching cannot be misunderstood."

The name "Jason" is the Graeco-Judean equivalent of Joshua or Jesus. The word "Argo" means company of travelers. If you have E.W. Bullinger's The Witness of the Stars, I encourage you to read pages 157-161 for further insight.

Eta Carinae is on the poop deck of the ship, which is where the captains of ancient ships stood to oversee their crew in front and to make sure the ship was on course.  Below is a recent picture of Eta Carinae taken by the Hubble Space Telescope. 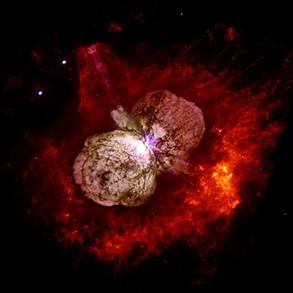 The following is from an article titled “Eta Carinae Plays Purple Haze” written by Robert Naeye and released by Sky & Telescope on July 7, 2004.

“Lately things just don’t seem the same with Eta Carinae, one of our galaxy’s most amazing stars. The blue supergiant weighs in with at least 100 solar masses, and it pumps out as much energy in 6 seconds as the Sun does in an entire year. During the 1840s the star brightened tenfold as it explosively ejected an astonishing 5 to 15 solar masses of material to form the surrounding Homunculus Nebula. Eta Carinae somehow managed to survive this catastrophe, whose cause remains a mystery.

But incredible luminosity and giant eruptions are just part of the story. Recent changes in a "purple haze" surrounding Eta Carinae offer virtual proof that this supergiant is even more impressive than originally thought. It isn’t just one massive star, it’s two.

Many astronomers have suspected that Eta Carinae is a binary since 1996. In that year, Augusto Damineli (University of São Paulo, Brazil) pointed out that every 5.5 years Eta Carinae’s spectrum exhibits sudden and short-lived changes. According to Damineli, a companion star in an elliptical orbit periodically swings close to the primary star, and the two stars’ colliding winds temporarily alter the system’s behavior. Damineli’s idea was bolstered in late 1997 and early 1998, when the predicted spectral changes occurred right on schedule. But not all astronomers were convinced.

Even these dissenting voices will have a difficult time explaining the latest data with a single-star model. During the most recent event, which occurred in late June and early July 2003, astronomers observed Eta Carinae with instruments spanning almost the entire electromagnetic spectrum. Once again, Eta Carinae displayed the periodic changes expected in the binary model. In addition, ultraviolet observations with the Hubble Space Telescope’s Advanced Camera for Surveys (ACS) revealed subtle shadow and brightening effects as the companion star apparently swung around the primary.

This effect is exactly what Smith and his colleagues observed with ACS. After accounting for light-travel time, Smith’s team noticed ultraviolet shadows and bright spots in the purple haze that changed position over several months, just as one would expect if a companion star approached the primary on one side, and then quickly swung around to the opposite side about a month later.

"The star would have to eject material in one direction first, and then in the exact opposite direction right after that, to account for our observations," says Smith. "This would be highly unusual, even for Eta Carinae."

These observations leave little doubt that Eta Carinae is a binary, probably consisting of a 100- to 150-solar-mass primary and a 30- to 60-solar-mass companion. In Smith’s model, which is consistent with a variety of data, the companion follows a highly elongated orbit like a cigar that is nearly perpendicular to Earth’s line of sight. "Eta Carinae does all sorts of bizarre things. Now we need to sort out what is caused by the binary and what is not," says Smith, whose paper has been accepted for publication in an upcoming issue of the Astrophysical Journal Letters.

Unfortunately, the likely decommissioning of Hubble is bad news for the astronomers who study Eta Carinae. No telescopes are being planned that would have sufficient ultraviolet capability and high resolution to see these shadows and bright spots, which is just one of many losses that would follow Hubble’s demise.”

There was not a bunch to write about in this newsletter.  I will make up for it in the next combined issue, which will cover the Fall Feasts.