Nehemia Gordon from Jerusalem, Israel compiled the following New Moon Report for June 2004 and the beginning of the Fourth Month on the Hebrew Calendar.

In the early evening twilight sky on July 10, 2004 the planets Adom (Mars) and Catab (Mercury) will be seen in a very close conjunction.  The planets will come to within ¼ of a degree from each other.

Chart 364 below shows the positions of Mars and Mercury in the sign and constellation Cancer at the time of closest conjunction. 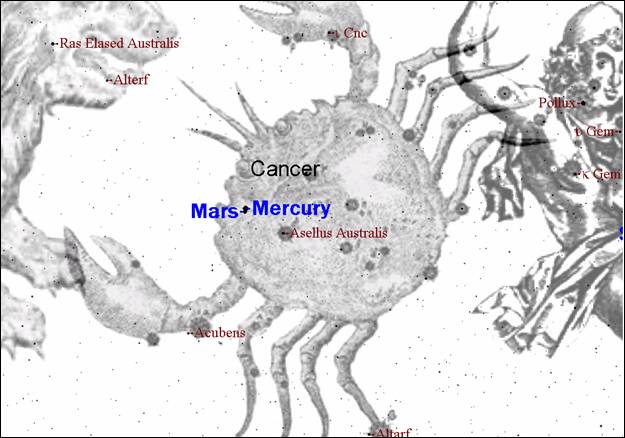 One Biblical portrayal of Mars is representing Michael the warrior angel, and one for Mercury is representing Gabriel the messenger angel (at times a warrior himself if the “man” mentioned in Daniel 10 is Gabriel who Michael came to assist. Gabriel visits Daniel on at least two other occasions before this – Dan. 8:16 and 9:21).  In Daniel 12:1 it is mentioned that Michael is the great prince that stands up for “the children of thy people” (Israel).

The main theme of the sign and constellation Cancer is Messiah’s redeemed Possessions held fast.  In the ancient planispheres this is seen as flocks of sheep in a coral and in sheep pens (not a crab).  It is a place of safety for Yahweh’s sheepfolds in times of trouble.

Since there is not much going on this month that is foreseeable in the heavens, except for the Mars/Mercury conjunction, I will use this opportunity to answer a few questions that I have received from the subscribers.

The first question that I will address came to me in a note, which concerns the loop in the path of Comet Bradfield displayed on Chart 352 in the May 2004 issue of Biblical Astronomy:  “How can a comet make a hook around the band of Pisces?  Don’t comets move in straight (slightly curved) lines?”

Chart 365 below shows the path of Comet Bradfield (blue curved line entering at the left in the chart and exiting at the top) coming in above the plane of the ecliptic (reference grid in red which represents the plane that the planets orbit the sun), then going below the plane (hard to see here) and then back up through the plane on its way out.  The black smudgy circle in the middle of the plane is the sun.  The circles on the plane going around the sun are the orbits of the four inner planets.  The orbital path of Earth is the second circle in from the outside.  The black dot on the circle is Earth and shown here with a very small light blue label.  This orbital diagram is from the Comet Observation Home Page.  I attempted to make this diagram myself with bigger labels from the Starry Night Pro software, but forgot how to do this particular type of diagram and after 3 hours of unsuccessfully trying to get it to project properly, I gave up for now.  I need to find the manual to do it proper and it looks as though it may be buried someplace.

From Earth, Comet Bradfield appeared to loop around the bands of Pisces.   The earth is also moving in an elliptical orbit, which contributes to the apparent motion of other objects traveling through the heavens.  Planets such as Venus and Mercury also appear to move backwards at times and make loops as seen from Earth.

The diagram below shows the path of Comet Bradfield as it appeared from Earth over a period of about 240 days.  The apparent loop is caused partially by the earth’s orbit around the sun.  As the comet moved closer to the sun and earth, its actual and apparent velocity increased due to the gravitational forces of the sun. 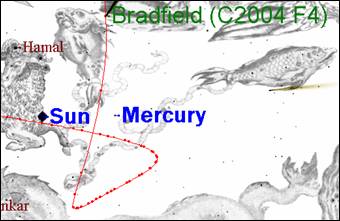 It took approx 200 days to go from the left side in Aries to its lowest point beneath the bands, and 40 days from there to the top of the diagram (10 days from the dot just above the loop of the bands where they meet and the next dot in the tale of the fish when the comet was at its closest approach to the earth and sun).

Celestial events as signs are set up to be observed as seen from Earth, since it is this planet that the prophecies of the Holy Scriptures pertain to.

The next and last question that I will answer at this time is one that I answered to a lesser degree in the article The Great Sign of Revelation 12:1?  in the June 1999 issue of Biblical Astronomy.  That article was written to answer inquiries at that time on an article written on The Watcher website. Inquiries over this subject have greatly increased in the last few months since that particular article surfaced again on another popular website, which I will not mention the name of.  Those who have asked me about this, and many who haven’t, know which site I will be talking of.  I am not out to pick on any individual or website here, but to set the facts straight for all those who asked me to do so.  Below in quotes is the recent article from the website in question.

“Much has been said over the past several years regarding the sign of Revelation 12. There have been excellent articles explaining how this sign has appeared in the heavens, primarily on Sept. 12, 1999 which was the end of Rosh Hashanah of that year. Many of us, myself included, believe this was an awesome sign of how near the time of the end is. The following link is a great article by Greg Killian explaining this sign of 1999. It is also noteworthy that this sign has been appearing each fall from 1996 through 2000 due to the precession of the earth. The current trajectory of the moon through the heavens follows a lower, more WSW path then it did from 1996-2000 due to precession, so this sign no longer appears each fall.”

In his original article Greg Killian stated that the sign of the moon in “womb” of Bethulah on September 12, 1999 was a very rare event and would not occur again for another 26,000 years.  This is totally erroneous just as other statements in the quoted article above are erroneous.  For one, the moon was not in the womb of Bethulah on September 12, 1999 but just above her left knee.

Chart 366 below shows the position of the moon in Bethulah on September 12, 1999.  For some reason it was assumed by the author above that the stick figure of the constellation was the correct picture with two arms, the main body and two legs.  However, this constellation stick figure is one that was put forth by the Astronomical Union in 1923 and has nothing to do with the actual picture known throughout the ages of where the head, womb and feet belong.  The star Auva has in all ancient and recent figures always been in or very near the womb.  The moon here is a long way from Auva. 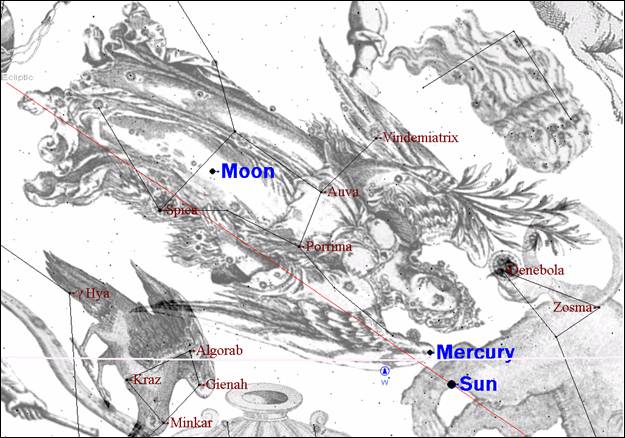 Chart 367 below shows the position of the moon in Bethulah on September 16, 2539 as seen from Jerusalem at 7:00 pm.  For those who have astronomy programs you can check this out for yourselves to see if these things are so.  The year 2539 is long before another 26,000 years.  This actually occurs about every 19 years (the solar/lunar cycle) as seen from various locations on Earth and is seen as such from Jerusalem on Tishri 2 about every 200 years for at least another 2000 years. 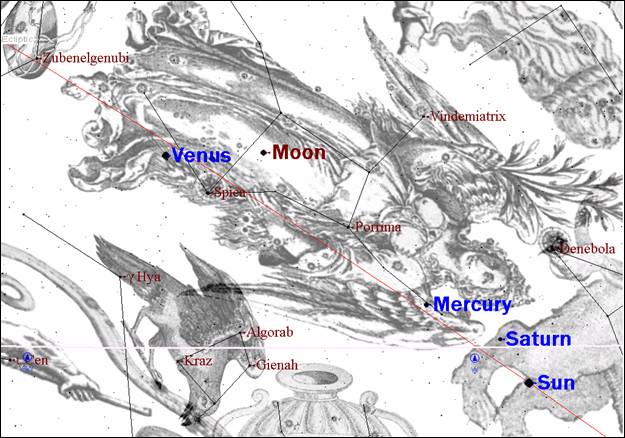 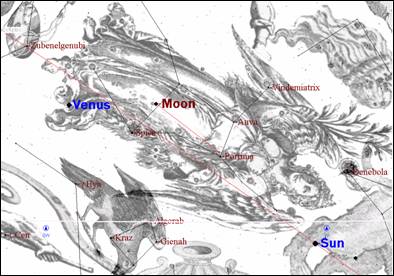 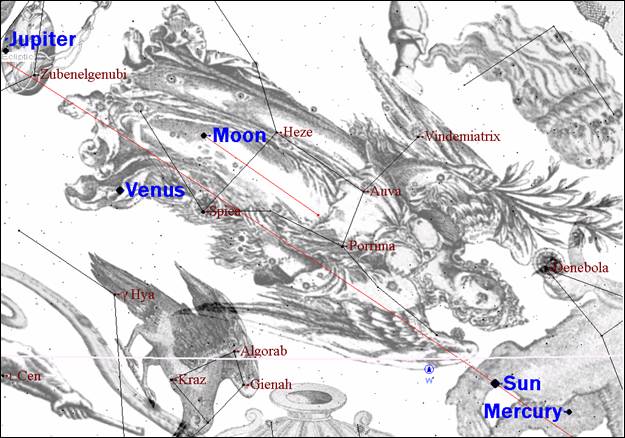 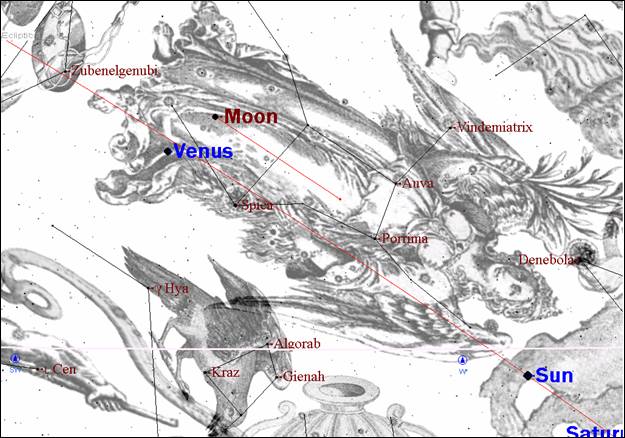 The following quote from the above article is very erroneous.

‘The current trajectory of the moon through the heavens follows a lower, more WSW path then it did from 1996-2000 due to precession, so this sign no longer appears each fall.”

Due to the precession, the angle changes slightly when viewing Virgo from Jerusalem, but there is only about a 2 degree change over a 12,000-year period.  Besides that, the ecliptic is getting higher in Virgo as time goes on, not lower, until about the year 8500 when it will begin to lower again and come to where it was in 4000 BC.  The moon can be seen anywhere from about four degrees below the ecliptic to 4 degrees above it in its regular cycle.  So, if anything, the moon is getting higher in Virgo each nineteen-year cycle (very slight difference each cycle), not lower, and will be seen many times over the next twenty centuries from Jerusalem on Tishri 2 and in the same position in Bethulah as it was seen on September 11, 1999.

I strongly disagree with the author’s interpretation of that event, but that is neither here nor there.  Disagreement on interpretations is one thing, but stating wrong astronomical facts is another.  I am sure that such statements in this case were made out of ignorance of celestial mechanics and not doing enough ground work rather than outright blatant lies. So goes with the following statement in the article.

“From the time of the Pentecost sign in the heavens this Shavuot, May 25-27, 2004, to the time of the start of the unbelievable 2005 sign in August, Jupiter will be approaching and enter Virgo from the direction of Leo.  Jupiter just enters Virgo on 9/11/2004, but it will not be visible because it will be too close to the sun and the horizon at sunset as viewed from Jerusalem.  9/11 is an interesting date for this to happen I would say.  Jupiter continues to travel deeper into Virgo from 9/11/2004 through Aug. 2005.”

Jupiter actually enters Virgo on August 26, 2004.  This is not “unbelievable” since it enters Virgo every 12 years in its path through the heavens and Venus is with Jupiter in Virgo at least once while Jupiter is in Virgo and sometimes twice.  Though there is a unique massing of three planets close to the sun in late September as well as a possible naked eye comet coming down through the midst of Bethulah at that time as well.  But more on this in the September 2004 issue of Biblical Astronomy.

I will be away in New York until July 19, so I will not be here to process any orders from July 3 thru the 19th.   Yahuweh bless you and keep you.