Nehemia Gordon from Jerusalem, Israel compiled the following New Moon Report for the month of October and the beginning of the 8th month on the corrected Hebrew calendar.

“On Friday the new moon was seen from Jerusalem, Israel by Devorah Gordon and Ferenc Illesy at 17:23.”

The first day of the Eighth Month was from sunset October 15, to sunset October 16.  The next new moon is expected to be visible from Jerusalem near sunset on , which will be the beginning of the Ninth Month on the corrected Hebrew calendar.

On Tzedek (Jupiter) and Nogah (Venus) will come into a very close conjunction with each other in the Sign and constellation Bethulah (Virgo).  The below diagram shows the planets at 30 minutes before sunrise, looking toward the east-southeast. 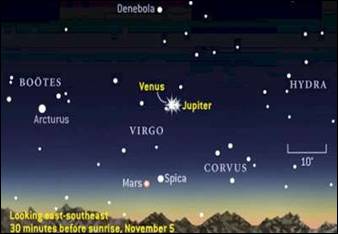 Chart 378 shows the positions of the two planets in Bethulah at the time of conjunction on November 5 as seen from Jerusalem.  The planets are the two dots to the left of the V in the label Venus.  The larger dot to the left is Nogah (Venus) and the smaller dot to the right is Zedek (Jupiter).  The planets will be about ½ of a degree from each other at their closest conjunction. 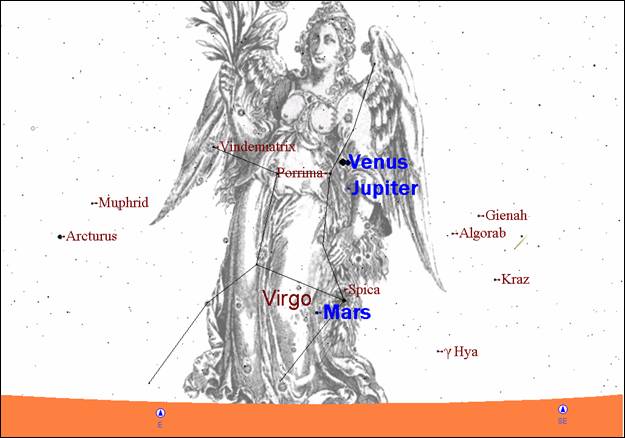 Chart 378 – Jupiter & Venus in conjunction 30 minutes before sunrises on

Zedek represents THE LORD OUR RIGHTEOUSNESS and Nogah represents the bright and morning Star.  Both (the Father and the Son) are seen here in the Sign and constellation Bethulah, which represents the faithful of the House of Israel (all twelve tribes).  Bethulah also represents the Promised Seed of the woman and the harvests of the feasts of Yahweh and the harvest at the end of this present world. (See the Sept/Oct 2004 issue of Biblical Astronomy).

THE YEARLY ROAR OF THE

It is that time of the year again for the second most popular meteor shower of the year, the Leonids.  The following is an excerpt from an article from the Sky & Telescope website concerning this year’s shower.

“The much more famous Leonids are expected to peak on Wednesday morning, November 17th, well after the crescent Moon has set. But we are now well past the 1999–2002 period, when observers in some parts of the world witnessed very strong, even storm-level activity from this shower. This year, no more than 15 to 20 meteors per hour are likely under even the best conditions. Despite their low numbers, Leonids tend to be bright and leave persistent trains.

The Leonids travel in the 33-year orbit of periodic comet 55P/Tempel-Tuttle, which passed through perihelion in 1998 and is now on its way back to deep space. Great Leonid storms were witnessed in the years 1833 and 1966.”

This shower is named the Leonids because the Radiant (where the meteors appear to come out of) is in the head of the lion in the constellation Leo.

Below is a diagram showing the location of the Radiant of the shower.  This is as seen looking east at 3 a.m. on November 17. 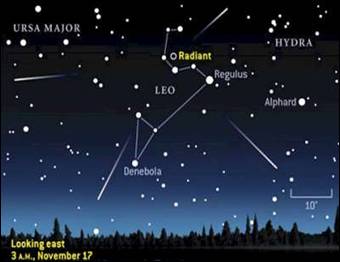 The Hebrew name for this constellation is Arieh (the Lion).  This represents the Lion of the Tribe of Judah.

COMET MACHHOLZ IS ON ITS WAY

As mentioned in the Sept./Oct. 2004 issue of Biblical Astronomy, Donald Machholz discovered a new comet on .  The comet has been designated the name Machholz C/2004 Q2.  Comet Machholz is expected to reach a brightness of magnitude 4 and remain there from late December and mid January, well within the naked eye range.

Chart 379 shows the path of the comet from to .  It should reach its closest approach to the earth and be at its brightest magnitude around January 6 or 7 as it passes the Pleiades cluster in the constellation Taurus (seen on the chart as the little cluster of black dots to the left of the comet).  Before passing through Taurus, the comet will pass through Eridanus (the river of fire) in mid December. 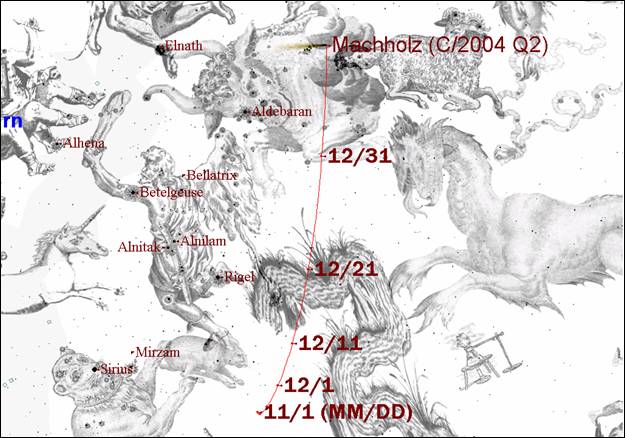 Chart 379 – Path of Comet Machholz from to

The Pleiades represent the congregation of the Judge or the seven stars that represent the seven assemblies of Revelation 1 – 3.  Between January 7th and 9th Comet Machholz will be about two degrees to the west (right) of the Pleiades.

Below is a picture of Comet Machholz taken on . 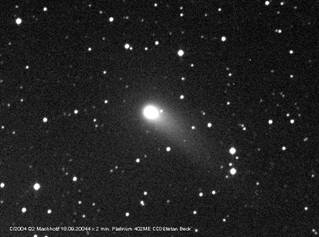 There will be more information on this comet in upcoming newsletters.

Comet LINEAR (C2003 K4), which was also mentioned in the Sept./Oct. 2004 issue of Biblical Astronomy, did not reach naked eye visibility.

The total lunar eclipse of October 27 was a wonderful sight visible from Israel as well as the East through West Coasts of the United States.  Below is a picture of the eclipse near its peak taken from Portland, Oregon (my neck of the woods). 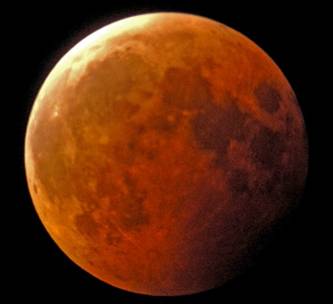 The eclipse appeared a bit darker as seen with the naked eye.  A camera lens pulls in more light than the human eye, thus the object shows up a bit brighter on a picture.  There are reports that the eclipse did appear blood red from some areas of the United States.  This was the last Total Lunar Eclipse until the year 2007.

SMOKE OF THE BATTLEFIED

The following is an excerpt from a Sky & Telescope article released on October 12 concerning the supernova remnant of the famous and very bright supernova of 1604.

“Look closely — this beautiful scene truly is more than meets the eye. By combining images from infrared, visual, and X-ray telescopes, this mosaic of Kepler’s Supernova Remnant reveals an expanding shell of metal-enriched stellar material powered by a shock wave that rocks everything in its path. 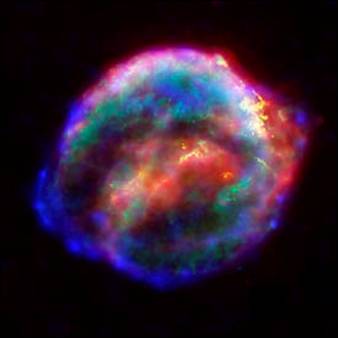 Four hundred years ago, in October 1604, skywatchers — including astronomer Johannes Kepler — first saw a bright new star shining at magnitude –3 in the constellation Ophiuchus. It remained bright for weeks. At the time, no one knew what is was, but now we recognize it as the last observed supernova within our galaxy.

A team led by Ravi Sankrit and William Blair (Johns Hopkins University), used multiwavelength data from three NASA space observatories — the Chandra X-ray Observatory, the Hubble Space Telescope (visible light), and the Spitzer Space Telescope (infrared) — to image the scattered remains of the explosion. The wide range of emission in the remnant is the result of the supernova’s expanding shock wave colliding with previously ejected material from the progenitor star. Different wavelengths generally represent varying temperatures within the interstellar gas.

Based on the team’s analysis, the dense clumpy visible-light nebula, shown in yellow, is embroidered by knots and filaments depicting instabilities left in the wake of the explosion. Other features include an infrared shell of dust, shown in red, thought to be similar in composition to the chemically diverse material that condensed to form the Sun and solar system. Also, stretching across 14-light-years is a shroud of high-energy (blue) and low-energy (green) X-ray-emitting gas, still expanding with an average speed of 2,000 kilometers per second.

Though the view of the supernova remnant is becoming clearer, the mystery behind the star that created it remains cloudy. Of the six observed supernovae in our galaxy, the type of star that formed SN 1604 continues to elude astronomers. The relatively young supernova remnant, still in its early stages of evolution, hides the central star with heavy gas clouds, thereby obscuring the once massive star while simultaneously creating this eye-catching sight.”

This supernova took place in the constellation Ophiuchus of the Sign Scorpius (the conflict or war).  On 04 there was a massing of the planets Jupiter, Mars and Saturn (this massing represents heavy spiritual warfare) in this constellation.  Later that month, the supernova exploded and became brighter than Jupiter.  This occurred smack between and in the middle of Jupiter (God) and Saturn (Satan).

It was in 1604 that the commissioning to write the King James Bible took place.  It was also during that time that plans were made by England to send people to North America to start colonies.  One of the early groups to arrive with its newfound religious freedom was the Plymouth colony of 1620.  And look what happened from there.  A great nation was formed on the principles of freedom of worship.  A great battle was fought and won.