Nehemia Gordon from Jerusalem, Israel compiled the following New Moon Report for the month of September 2005 and the beginning of the Seventh Month on the Biblical calendar, the month of Ethanim.

“On Monday September 5, 2005 the New Moon of the Seventh Biblical Month was sighted from Israel marking Yom Teruah, the Day of Shouting (Trumpets).  The moon was seen from Jerusalem by Terry Fehr at 19:05 followed by Ray Dow, Carmen Fehr, Dina Marcus, Ayi Marcus, Nehemia Gordon, Ferenc Illesy, Pam Dow, Neria Haroeh, and Rond Aboodi.  The moon was also seen from another part of Jerusalem by Devorah Gordon at 19:15.  The moon was seen from Tzur Hadasa by Lee Ware at 19:05 followed by Roberto Umana and 7 other People.

The following are dates for the Fall Feasts according to the sighting of the New Moon.  The dates are from sunset to sunset.

At times for various reasons I am late in getting these dates to you.  If you have Internet access you can get the new moon sightings sent to you via e-mail when they happen.  It is available for you to sign up for these and Aviv Barely reports at www.karaite-korner.org

There will be a somewhat notable conjunction of Jupiter, Mercury and Tsemech (Spica) in Bethulah very near sunset on October 5, but it will not be visible to the naked eye (perhaps Jupiter will be visible) for they are too close to the sun and the sun’s glare will block them out.  I will cover this more thoroughly as well as other celestial events for October in the October issue of Biblical Astronomy, which I plan to have written and mailed by September 30.

I will be leaving for New York on October 5th and will be returning to Oregon on October 22.  As a result, I will not be processing orders between October 5 and 22.  Then I am off to Florida on October 27, where I will be doing a Biblical Astronomy seminar near the Fort Myers/Punta Gorda area on Friday evening October 28 and all day Saturday and into the evening on October 29.    There will be more information on this Seminar in the October issue of Biblical Astronomy.  I usually do a double issue of Biblical Astronomy for September/October.  I am doing a single issue of each this year in order to give more info on the location of the upcoming seminar.  I should have that info by September 28.  This issue is a bit shorter than normal, but there will be more to follow in a few weeks.

There are no notable signs in the heavens in September except for events that occurred in the first week of the month.  I covered most of these events in the August 2005 issue of Biblical Astronomy.

The September events that were covered in last months issue was the conjunction of Jupiter and Venus in Bethulah on September 2, and the conjunction of Venus and Tsemech in Bethulah along with the first crescent of the new moon on September 5.  These events were very unique and shone brightly.  They put on a great display for the observer.  One event that I did not put in the August issue was a very unique grouping of Nogah (Venus), Tsemech (Spica), Zedek (Jupiter) and the bright crescent moon on September 6, which was the second day of the Seventh Month, Ethanim.  Below is a simulation of this grouping from Astronomy Magazine.  This is how it would have appeared from the eastern United States. 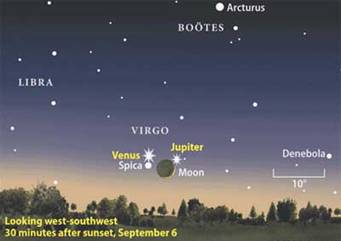 I know that I do not need to ask you to pray for the victims of hurricane Katrina, you most likely already have and are praying for them or loved ones that you know in the area.  There is one person who I am particularly concerned about at this time.  Her name is Linda La Hood.

Linda has been a subscriber to the Biblical Astronomy newsletter for many years now.  I received an order from Linda for Biblical Astronomy materials on August 30.  The envelope was postmarked on August 26.  I talked with her on the phone about a week earlier.  As I was preparing to send her the materials I noticed that her address was in Ocean Springs, Mississippi.  I put her address in a map search on the Internet to find the location of her home.  When I saw the location of her home, my heart sank.  Her home is about 7 miles to the east of Biloxi, MS and about 1.5 to 2 miles from the coastline of the Gulf of Mexico.

I had her telephone number and I tried calling her, even though I felt certain that I would not get through.  The line was busy for several days as expected.  I believe it was on the 12th of September that I called and reached her answering service.  The phone lines are up and running for parts of the state, but the connection to her answering service does not necessarily mean that her home is still in tact, or that her phone is working.  I tried a number of times to call to see if she would answer.  I left a message on her answering machine but have not heard anything yet from her.  I am concerned for Linda to say the least.

If any of the readers of this newsletter know Linda and know if she is ok, or if Linda somehow sees this article on the Internet, please get in touch with me to let me know how you are (by phone or postcard or e-mail).    I did not process the order or deposit the check, so the money is still in your account.

I ask fellow subscribers and readers to pray for their sister in Messiah and her family.

The constellation of the month for the September newsletter is Comah.  Again Michele Abraham did a wonderful job in bringing this constellation to life by giving it a unique Hebrew flavor and natural look.

This constellation was perverted by the ancient Greeks and has since come down to us as Coma Berenice (The hair of Berenice).

E.W Bullinger writes in The Witness of the Stars, p.35 – “This is a good example of how the meaning of other constellations have been perverted (ignorantly or intentionally).  In this case, as in others, the transition from ancient to more modern languages helped to hide the meaning.  The Hebrew name was Coma (desired).  But the Greeks had a word for hair, Co-me.  This again is transferred to the Latin coma, and thus “Coma Berenice” (the hair of Berenice) comes down to us to-day as the name of this constellation, and gives us a woman’s wig instead of that Blessed One, “the Desire of all Nations.”

In this case, however, we are able to give absolute proof that this is a perversion.  The ancient Egyptian name for this constellation was Shes-nu, the desired son!

The Zodiac of the Temple of Denderah, in Egypt, going back at least 2,000 years B.C., has no trace of any hair, but it has the figure of a woman and child.” 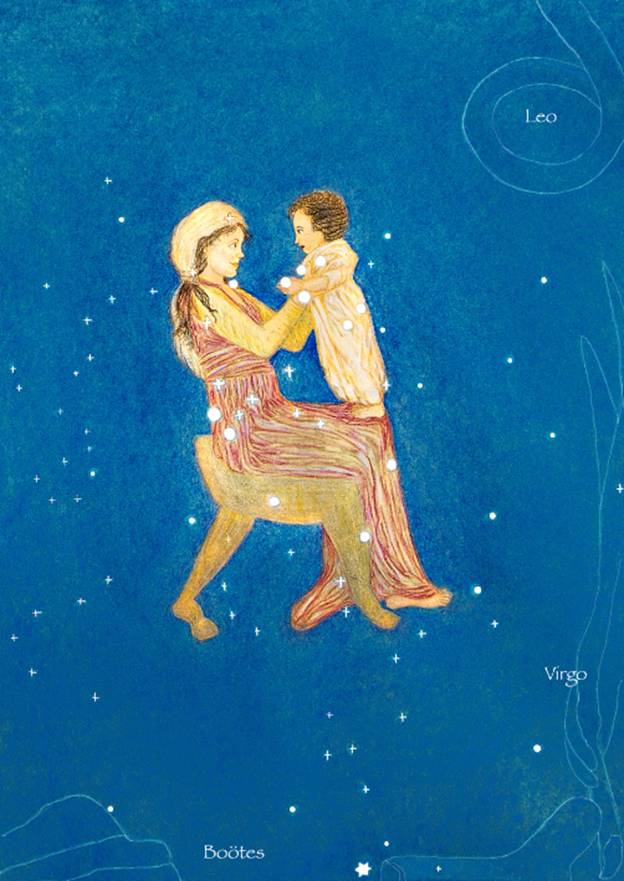 Comah (The Woman and Child)

The desired of all nations

Hebrew and other ancient names for this constellation

From E.W. Ballinger’s, The Witness of the stars, pp. 34 and 35 – “The ancient Zodiacs pictured this constellation as a woman with a child in her arms.  Albumazar (or Abu Masher), and Arabian astronomer of the eighth century, says, ‘There arises in the first Decan, as the Persians, Chaldeans, and Egyptians, and the two Hermes and Ascalius teach, a young woman, whose Persian name denotes a pure virgin, sitting on a throne, nourishing an infant boy (the boy, I say), having a Hebrew name, by some nations called IHESU, with the signification IEZA, which in Greek is called CHRISTOS.’”

This child is the promised seed of the woman from Genesis 3:15 whom all creation longed and longs for.  This child is Y’shua HaMashiach (Jesus Christ).

Subilah – who bears.  This is the Hebrew name for the woman in this constellation.

Complimenting scripture to this constellation

Haggai 2:7 – And I will shake all nations, and the desire of all nations shall come: and I will fill this house with glory saith the LORD of hosts. (KJV)   The NIV has desired here and the scriptures have Delight.

This constellation has no bright stars such as most constellations, which have at least one or two stars of the first and second magnitude.  Comah has ten stars of the 4th magnitude and the remainder of the stars are of 5th, 6th, etc of less brightness or magnitude.  There are no ancient names known for these stars.  The names were most likely lost over the ages.

Below is the picture of this constellation from the Denderah zodiac of ancient Egypt.  Michele changed this to make it look more natural and Biblical by taking away the Egyptian hairdo of the woman and putting the child on the woman’s knees instead of her one hand.