“Aviv has been found in Israel!  We found fields of Aviv barley from all three types of barley that grow in Israel: 2-row wild barley, 2-row domesticated barley, and 6-row domesticated barley.  Some of the locations we found aviv include:  Mari a-Naja and Argaman (both in the Jordan Valley), Peduyim and Kisufim (in the Northern Negev), and Mordechai Junction (on the coastal plain).  We found both volunteer barley and planted fields in more than sufficient quantities for the harvest to begin in two week’s time during the Feast of Unleavened Bread.  The searches were carried out on Tuesday (Jordan Valley) and Thursday (Northern Negev and Coastal Plain).

The New Moon, which will be visible tonight (Mar 30), will mark the beginning of the Biblical Year!  Chag HaMatzot (Feast of Unleavened Bread will begin on at sunset.”

For more information on the times of the Biblical Holidays please logon to:  http://www.karaite-korner.org/holiday_dates.shtml

Nehemia Gordon from Jerusalem, Israel compiled the following New Moon Report on for the beginning of the First Month on the Biblical Calendar, the month of Aviv.

New Moon of the Aviv Sighted

“On Thursday the New Moon of the Aviv was sighted from Israel.  The moon was first sighted by Magdi Shamuel at 17:58 from Bet Ezra, followed by Eli Shamuel at 18:01.  The New Moon was also sighted by a group of observers from Jerusalem, first by Lee Ware, Rivkah Alon, and Libby Moor at 18:09 and then by 11 other observers over the next two minutes.  The moon remained visible for many minutes.”

Below is a photo of the New Moon taken from Jerusalem on .  It may be difficult to see in this print.  The crescent light is in the center of the photo. 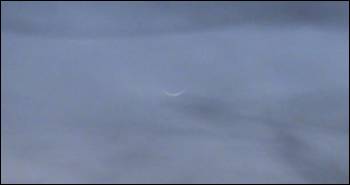 Below are the projected dates (in raw data form) for the first days of the months for Biblical calendar for the coming year.  The dates are near sunset when the moon is expected to be visible from Jerusalem.  I have the percent of illumination of the moon to the closest whole number, and the degrees above the horizon also to the closest whole number (not broken down to fractions).  These calculations are for the moon at 5 minutes after sunset.   The date in parenthesis is the day included in the first day of the month (through sunset).  Where there are borderline situations I have also listed a secondary possible date.

For those who like to plan ahead for the holidays, the projected dates for the upcoming Fall Feasts are:

Feast of Dedication or Feast of Lights (Hanukkah) – will most likely start at sunset on December 16 and end at sunset on .

The below article is from Arutz Sheva, Israel National News concerning the Solar Eclipse on as it appeared from Israel.

“An 82% solar eclipse enveloped Israel in sudden darkness Wednesday. The eclipse began at , peaked at 12:58, and lasted until . The following are pictures from the eclipse (I am just showing the one picture below out of 14, which was taken through a red solar filter from Israel.  To see the rest of the photos go to: 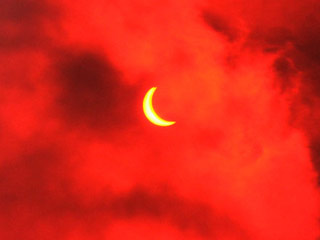 “As Israel digested the results of Tuesday's election, the sky went dark, the sun was slowly blocked out, temperatures dropped and animals howled, barked and crowed across the Land of Israel.

An eclipse occurs when the moon passes between Earth and the sun during daylight hours, causing its shadow to pass across the planet. Viewed from inside the moon's shadow on Earth, the moon is exactly the right size to completely block the sun. From Israel, Wednesday's eclipse blocked 82% of the sun.

The moon's shadow began in Brazil, crossed the Atlantic, Ghana, Nigeria and Chad. The shadow of the moon then passed by way of the Mediterranean across southeast Turkey and continued until Siberia.”

I did have time to do a 107-year search on Solar Eclipses seen from Jerusalem to get somewhat of an idea of how rare they are.  If I did not find any in the 107-year search, I would have had to do more searches, which could have ended up being a 2,000 plus year search.  However, I did find two prominent solar eclipses that were visible from Jerusalem on the eve of Aviv (what a rhyme) in the Twentieth Century.  They are a bit rare but not extremely rare.

On 22 there was an annular eclipse of the sun as seen from certain locations on Earth.  From Jerusalem, that eclipse appeared as a partial eclipse, with 83% of the surface of the sun being covered by the moon.  It was very similar to the eclipse of .  Below is a simulation of the 22 eclipse during its peak at . 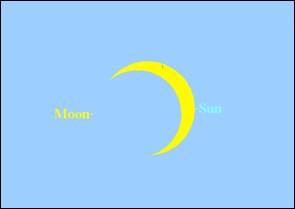 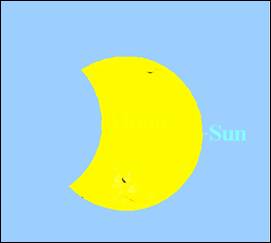 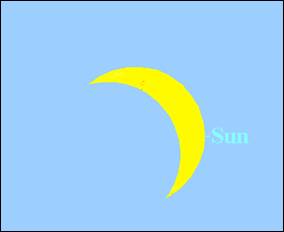 The sign of the crescent sun on may be seen by certain Muslim factions as a sign to escalate violence against Israel and the United States.  It is known that at certain times when the crescent moon is near a bright planet that it is seen as a sign to attack their enemies by certain factions.  This is interesting in light of the recent election results in Israel, both the Palestinian elections and the Israeli elections.  It is the intentions of the newly elected Israeli regime to give large tracts of land to the Palestinians in trade for peace (which will never happen unless Israel totally leaves the country or Messiah returns and completely annihilates Israel’s enemies).  It is against the will of the Almighty Yahweh for Israel to give its land away to their enemies.  Repercussions are sure to follow on this road to Armageddon.

Bob Wadsworth will be teaching a three-part seminar on Biblical Astronomy at Anaheim, California on May 6 and 7, 2006.    The seminar will start at on Friday May 5th, and at on Saturday May 6th.  There will be no cover charge for the seminar but donations are warmly welcomed.  Below is the address that the seminar will be held as well as contact information taken from the Orange Home Fellowship website at:

If you plan to attend the seminar you may wish to check the above link for updated information.

This May will be the 10th anniversary of Biblical Astronomy seminars by Bob Wadsworth.  I did my first public teaching on Biblical Astronomy at the Atlanta Bible Fellowship in Atlanta, Georgia in May 1996.  Since, I have had the privilege of doing seminars in over 35 cities throughout the United States.  I have lived in Oregon City for close to 27 years and the seminar I am doing there in May will be the first for that city.  It is also a first time for Anaheim (I just love those rhymes.).

The time is also coming up for the 10th anniversary for the Biblical Astronomy newsletter.  The first newsletter was published in July 1996.  I am looking forward to more seminars and newsletters in the future. 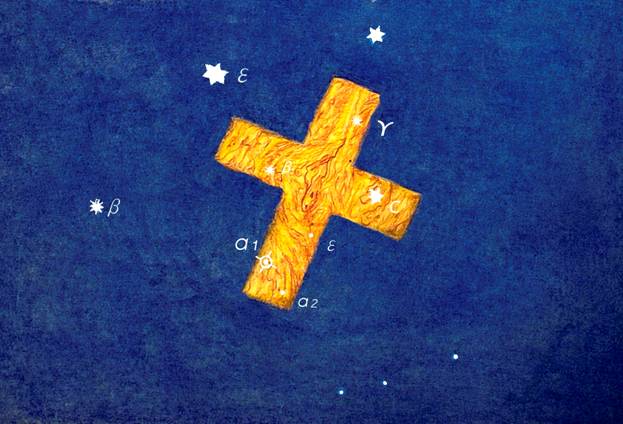 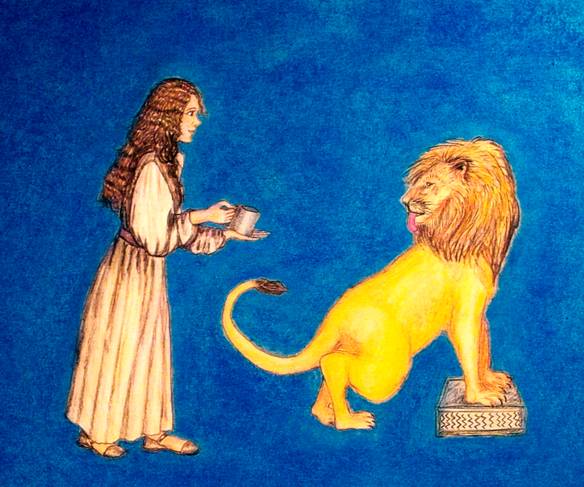 Decan constellation to the sign Libra (also known as The Southern Cross).

Ancient names for this constellation

Tau (Heb.) – a mark; especially a boundary-mark, a limit or finish.  The Hebrew letter Tau finishes the Hebrew alphabet.  The letter was anciently made in the            form of a cross.

Complementing scriptures to these constellation pictures

Daniel 9:26 (NKJV) – “And after sixty-two weeks Messiah shall be cut off, but not for Himself;

It was in the midst of the sixty-third week, which was after sixty-two weeks that Messiah was crucified.  After the sixty-third week there were 7 weeks unto Pentecost when the Comforter was received, first by the apostles and then by thousands on that day.  This made a total of 70 weeks as written by the prophet Daniel.

Stars in the Crux and the meanings of their names

The names of the stars in this constellation have been lost to antiquity (except for the Almighty who created them still knows their names since he named all the stars).  There are four main or brighter stars in Crux that form a cross.

Another ancient form of this constellation, which is from the ancient Egyptian Zodiac of Dendurah, is that of a lion with his tongue hanging out of its mouth as if in thirst, with a woman holding a cup out to him. The lion is also seen standing on an Egyptian hieroglyphic representing running water.  The lion’s rear leg is bent down as though the lion is about to go down.  As E.W. Bullinger writes in The Witness of the Stars, p.50 – “What is all this but ‘the Lion of the tribe of Judah’ brought down ‘into the dust of death,’ and saying ‘I am poured out like water…my strength is dried up’ (Ps. 22:13-18): ‘I thirst’ (John 19:28): ‘and in my thirst they gave me vinegar to drink’ (Ps. 69:21).  The Egyptian name of this Lion, however, points to his ultimate triumph, for it is called Sera, that is, victory!

The picture of the lion and the woman in Michele Abraham’s painting is after that of the Dendurah Zodiac. Michele did a wonderful job in giving more Biblical flavor to this picture.  We see the lion and woman together above this constellation in the major constellations Arieh (Leo) and Bethulah (Virgo).  Bethulah represents the faithful of the Twelve Tribes of Israel.  Another way to look at this picture is the faithful holding the cup out to receive living waters from the Messiah, who made this available through His death and resurrection.  “For the Lamb which is in the midst of the throne shall feed them, and shall lead them unto living fountains of water.”