Nehemia Gordon from compiled the following New Moon Report for the month of June, and the beginning of the Fourth month on the Biblical calendar.

The next new moon is expected to be visible from near sunset on July 26, 2006.  That will be the beginning of the 5th Biblical month, which is also known as the month of Av on the Hebrew calendar.

In the very early morning hours of July 20, 2006 the waning crescent moon will be seen from the eastern United States occulting (passing in front of) the star cluster the Pleiades.

The Pleiades were in ancient times referred to as the Seven Sisters.   The Pleiades are in the constellation Taurus. which represents Messiah, the  coming judge of all the earth.  The Pleiades represent the congregation of the Judge, specifically the seven congregations mentioned in Revelation 1:20 - 3:22. 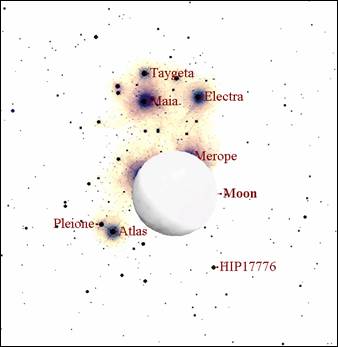 This is not a particularly rare event but unique nonetheless.  It may be worth the effort of getting up extra early on Thursday July 20, to see this event if you live in the eastern .  The optimum time to watch this occultation is between 2:30 am and 4:30 am, with the max at around 3:30 am (Eastern Daylight Savings Time).

The planet Adom (Mars) will come into conjunction with the star Regulus in the constellation Arieh (Leo) on the evening of July 21, 2006.

Chart 417 shows the position of Mars as it nears conjunction with Regulus as seen above the western horizon from Jerusalem, Israel at 8:40 pm Jerusalem Daylight Savings Time (about an hour after the local sunset) on July 21, 2006. 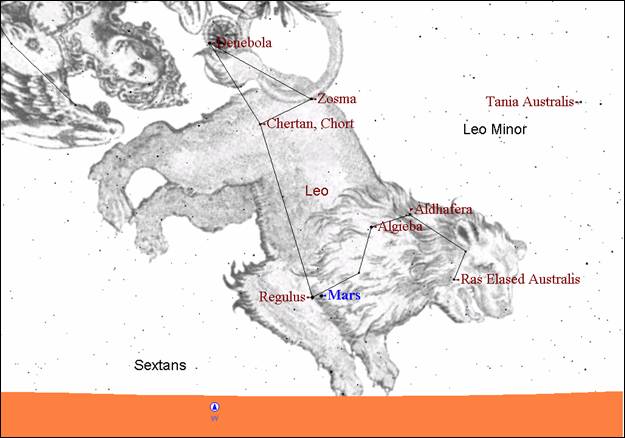 Adom (Mars) can represent the atoning blood of Messiah, or War, or the warrior archangel Michael, depending on the context of the celestial event.  Regulus has from ancient times been regarded as the King Star of all the constellations, and also represents the King of Judah (the Lion).  Mars comes into conjunction with Regulus about every two years.  The conjunction this year is not a real close conjunction, but about average.

Last month I wrote on a preliminary report of a possible large meteorite striking .   Below is an update on that report from the Sky & Telescope Website News Release.

June 16, 2006 | News outlets reported last week that a meteorite struck a mountainside in , releasing as much energy as the atomic bomb. Now researchers are reporting the first data from the blast, which shows that the event was much more tame.

On June 7th, residents of , reported that they saw a large ball of fire in the sky at about 2:05 a.m., local time. Based on early reports, Knut Jørgen Røed Ødegaard ( of , ) estimated that the energy of the event was comparable to the bomb; however this was quickly disputed.

“A Hiroshima-sized blast usually corresponds to a projectile that explodes tens of kilometers high, coming nowhere near the ground,” says David Morrison (). “I am skeptical that this was anything more than a very bright fireball.”

Wayne Edwards and Peter Brown, both of the Western Meteor Physics Group at the of in , report that their group detected the airwaves from the meteorite at stations in and . Using both airwave and seismic data, Edwards has calculated that the impact released between 0.1 and 0.5 kilotons of energy — about 1/100th as much as the Hiroshima blast.

“That’s still substantial,” says Brown. “It’s unusual that it would impact someplace where there’s a population of any sort.”

Edwards and Brown estimate that if the meteorite had entered Earth’s atmosphere at 18 to 20 kilometers per second (40,000 to 45,000 miles per hour) — about the velocity of a typical Near Earth Asteroid — then a conservative estimate would put its mass between 2,000 and 10,000 kilograms (4,400 to 22,000 pounds). Most of this would burn up in the atmosphere, so only about 20 to 1000 kg might actually reach the ground.         “You’ll probably get individual fragments making it to the ground,” says Brown. “But the area there is very rugged, mostly bush and tundra, so the prospects of meteorite recovery are very low.”

Based on the seismic and airwave data, Edwards and Brown calculate that the meteorite landed somewhere around 69.1 - 69.5N and 22.2 – 24.2E; however, no material has yet been reported.

Meteorite impacts of this magnitude occur about a dozen times every year, but most strike unpopulated areas. On March 26th, 2003, a similarly energetic meteorite exploded over , , scattering large pieces over the suburbs of . Researchers estimate that the Park Forest meteorite was anywhere from 900 to 14,000 kg and about 2 meters (6.5 feet) across; however they only recovered about 30 kg of material.

At the conference building behind the Margaretville Phone Company

Hosted by Congregation Tree of Life

See you down at the crossroads

There will be no cover charge for either seminar.   All are welcomed to attend.

In the June 2006 issue of Biblical Astronomy I had Haman in the book of Ruth. My, oh my.  The last time I checked, he was in the book of Esther.  Well, it was very late in the evening, or should I say early morning after an all-nighter and my brain must have crossed the two books as I was writing on a roll. I apologize for any inconvenience.

Though I am not a fan of End-Time timelines, I put a Biblical timeline together using celestial events, including rare to very rare events that marked out certain Biblical events throughout history.  I have covered these celestial events over the last ten years in the Biblical Astronomy newsletters and in my books and videos.  I will be doing a short recap of these events in the next issue or next few issues of Biblical Astronomy.

The following timeline is from the insert for the Biblical Astronomy DVD set.  As with other timelines calculated by men, it remains to be seen when future events will actually unfold.

430 years after Abraham came out of .

Messiah’s Millennial Reign on Earth begins on this day or 13 days later on the Last Great Day (Ethanim 22, day after 7 days of Tabernacles). 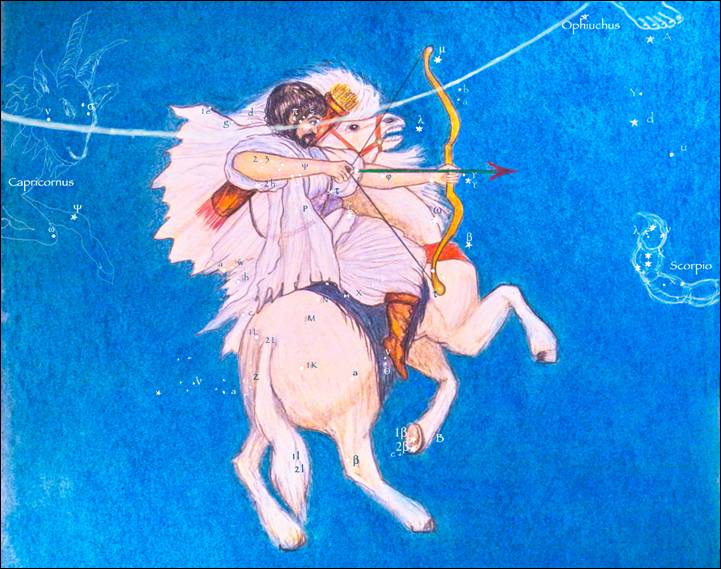 Pimacre (Copt.) – the graciousness, or beauty of the coming forth.

Sagittarius (Lat.) – the archer, who sends forth the arrow.

Complementing Scripture to this constellation picture

Psalm 45:2-5 (NIV) – You are the most excellent of men and your lips have been anointed with grace, since God has blessed you forever.  Gird your sword upon your side, O mighty one; clothe yourself with splendor and majesty.  In your majesty ride forth victoriously in behalf of truth, humility and righteousness; let your right hand display awesome deeds.  Let your sharp arrows pierce the hearts of the king’s enemies; let the nations fall beneath your feet (Emphasis mine).

Stars in Sagittarius and the meanings of their names

Nehushta (Heb.) – the going or sending forth.

Ruchba er rami (Arab.) – the riding of the bowman.

Nun-ki (Akkadian) – Prince of the Earth.

As seen in the picture above,     we changed this figure from the mythological Greek centaur (a half horse half man figure), to that of a bowman riding a white horse.  I believe that the centaur was a perversion of the figure that was originally meant for this constellation.  I have no proof of this, since most planispheres have the centaur or just the bow and arrow without the figure of a man or horse.  The mythological centaur made its debut around the time of the ancient Greeks 3,000 or so years ago, but not as far back as 5,000 to 6,000 years ago.  Hence, the original figure for this constellation could not have been a centaur.  The figure that Michele and I came up with (the bowman on the white horse) is more Biblically correct.  The figure below shows the centaur version of this constellation.  According to Grecian fable, this Sagittarius is Cheiron, the chief Centaur; noble in character, righteous in his dealings, divine in his power. 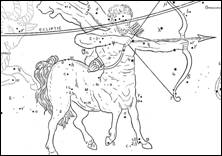 There has been some debate over the years if the bowman on the white horse in Revelation 6:2 is the true Messiah or the false messiah.  Be that as it may, one thing for sure is that the figure of the bowman in Sagittarius represents the true Messiah.   His arrow is aimed at the heart of the King’s enemy, the heart of the scorpion.  As it is written, “Let your sharp arrows pierce the hearts of the king’s enemies.” (Psa. 45:5)

Aratus, a Macedonian Greek Poet from the Third Century B.C., wrote the following of Cheiron (Sagittarius).

And thrusts the scorpion with his bended bow.”