Nehemia Gordon from compiled the following New Moon Report for May 2006 and the beginning of the Third Month on the Biblical calendar.

The next new moon is expected to be sighted from near sunset on June 26, but this is a somewhat borderline situation.  If there are hot weather conditions on and around June 26, causing greater evapotranspiration rates which puts more particulates in the air causing haziness in the atmosphere, then the new moon will most likely not be seen until the following day, June 27, near sunset.  We will see what happens.

Comet 73P Schwassmann-Wachmann has now come and gone and it does not appear that the earth has been struck by any of its fragments, other than a slightly possible meteor shower that may still come, as some predicted would happen.   Some are still saying that a lagering fragment may hit us soon (in June), but I seriously doubt that that will happen.

The brightest any of the fragments got were not very impressive as far as naked eye viewing is concerned.  I did not see any reports of naked eye sightings and the fragments did not brighten much beyond 5.5 to 6th magnitude.  There were some real neat photos taken of it though from telescopes.

Below is a mosaic photo of Fragments B and C of the comet taken on June 1, 2006 by Gerald Rhemann and Michael Jager from Farm Tivoli in Nambia.

MARS AND SATURN IN CONJUNCTION

The planets Mars (Adom) and Saturn will come into conjunction on May 17, 2006 in the Sign and constellation Cancer.

Chart 415 shows the positions of the planets Mars and Saturn in Cancer when they are in conjunction (same celestial longitude).  The cluster of stars between the titles Mars and Saturn (the little black dots) is the Praesepes, which means a multitude, offspring.  The modern name for this star cluster is the Beehive Cluster. 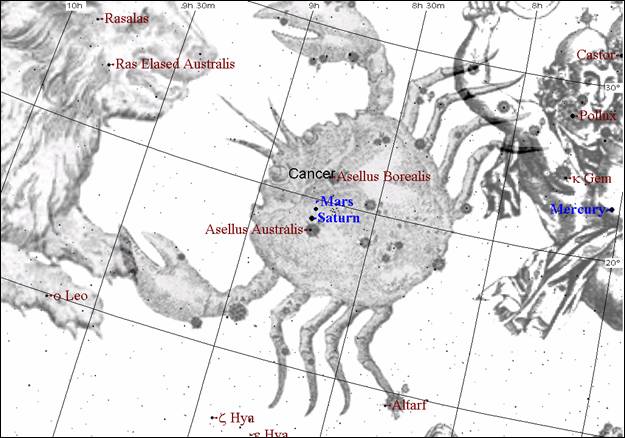 The main theme of the constellation and sign Cancer is Messiah’s redeemed possessions held fast.  As mentioned in previous newsletters, the crab was not the original picture for this constellation.  The more ancient picture is after its more ancient name Klaria, the cattlefolds.  Going by the star names in the constellation, it should be pictured as a type of coral with sheep pens.  A place where sheep are brought in to protect them from the elements and predators.  In the midst of the sheep pens are two donkeys.  It is known that donkeys protect sheep from coyotes and wolves.  This is a place of safety for the called out sheep of Yahweh.  It is a stronghold for the saved.

In this particular portrayal, Saturn represents Satan who is trying to break into the stronghold of the saved and attack the multitudes or offspring.  Mars can either represent the atoning blood of Messiah, or the warrior archangel Michael.  Either one works here.  It is the atoning blood of Messiah that protects the redeemed.  Michael also fights against Satan to protect God’s people.  Such was the case mentioned in Daniel 10:13 when Michael helped Gabriel fight against a nasty spirit in .  Michael is also mentioned in Daniel 12:1 –

“At that time Michael shall stand up, The great prince who stands watch over the sons of your people; And there shall be a time of trouble, Such as never was since there was a nation, Even to that time.  And at that time your people shall be delivered, every one who is found written in the book.” (NKJV)

In Chart 415, Mars (Michael) and Saturn (Satan) are seen in conjunction together with the stars Asellus Borealis (the northern ass) and Asellus Australius (the southern ass), the two donkeys protecting the sheepfold.  All four bodies are very close to the same celestial longitude.  Even though Satan is brining trouble to the sheepfold, they will be delivered out of it.  Here Satan is seen flanked by Michael on the one side, and the southern donkey on the other.  He just doesn’t have a chance.  This chart was done in the Ecliptic Mode, which keeps the ecliptic horizontal.

Note:  Saturn and Mars come into conjunction with each other in the constellation Cancer about once every 30 years.  But for the two planets to also be in conjunction with the two donkeys at the same time is most likely a very rare event.

Chart 416 shows the position of Mars in the Praesepes (multitudes or offspring) or Beehive Cluster in Cancer on June 15, 2006, a few days before the conjunction.  This chart was done in Local Mode, which is how it appears from the ground at the local location, which in this case is Jerusalem, Israel.   This is how it would appear from a telescopic view about an hour or so before Cancer sets in the west. 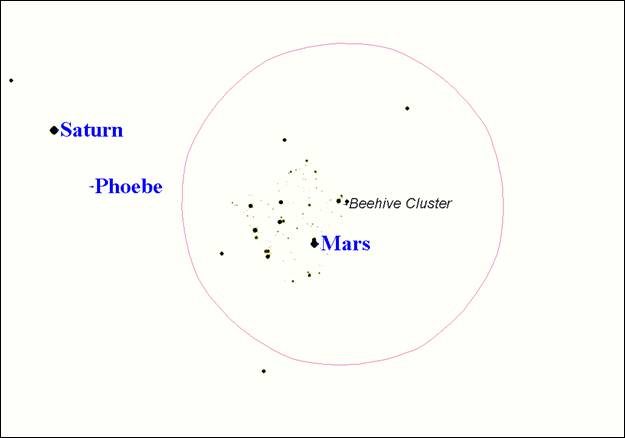 This is a very unique celestial event seeing Mars in the Praesepes.  Again, either portrayal of Mars (Adom) works here.  As the atoning blood of Messiah delivering His people, or Michael warring against Satan for God’s people, or both.

Saturn was on the outside ring of the Praesepes between May 31 and June 7, 2006.  This was a portrayal of Satan going after the woman’s offspring.  It passed along the rim of the imaginary ring shown in the simulation below, during those dates.  Saturn (Satan) left the ring on June 7, 2006 when two 500-pound bombs were dropped on one of his cronies.

The chart below shows Saturn just on the border of the Praesepes (Beehive Cluster) on June 4, 2006. 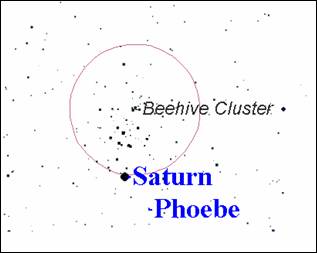 Oneonta, New York – There is a Biblical Astronomy seminar tentatively scheduled to be held near Oneonta, New York sometime between July 23 and August 3, 2006.  This is not locked in and I will not know any more details on this until I am contacted by those who will be hosting the seminar.  I am writing this to give a heads up of the tentatively scheduled seminar to those who are in the area.  I will have more information on this in the upcoming July newsletter.

Mobile, Alabama – There will be a Biblical Astronomy seminar held at Congregation Tree Of Life, corner of Dawes and Jeff Hamilton Roads in Mobile, Alabama on August 25 and 26, baring hurricanes.  Looks like I will be teaching “down at the crossroads.”

The seminar will start at 7 pm on Friday night August 25th, and at 1 pm on Saturday afternoon August 26th.  I will be giving this information again along with any updated information in the July newsletter.  For more info on this seminar, call: (251) 776-1002

Donations from online readers are welcomed. 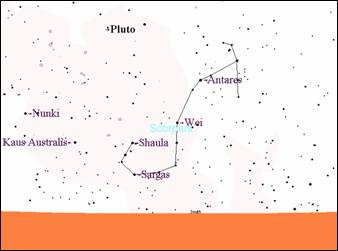 So, if you are up and about outside on July 4th weekend at around 10:30 pm, just look due south and you should be able to easily pick out the constellation Scorpio.  The brightest star in the constellation, Antares, is the easiest to pick out.  It is the brightest star in the area and has a reddish hue.  Once you recognize this star configuration, you will be able to easily point it out.  It is one of the easier constellations to recognize, and its tail looks like a scorpion’s tail.

?The Norwegian newspaper website Aftenposten is reporting that a large meteorite struck a remote region early in the morning.

“I saw a brilliant flash of light in the sky, and this became a light with a tail of smoke,” Peter Bruvold told the publication. “I heard the bang seven minutes later. It sounded like when you set off a solid charge of dynamite a kilometer (0.62 miles) away,” Bruvold said.

A Norwegian astronomer said it could be the largest space rock to hit the country in modern times and sought more eyewitnesses. [Story]

Reports like these sometimes turn out to be frighteningly true and other times turn out to be something else. Others remain sheer mysteries. Among the most interesting stories in that of a huge incoming object that exploded above Siberia in 1908. A handful of researchers still claim it was an alien space ship.”

We should soon have more information on this other than a blog, if this is correct information or not.  Until then, take it with a grain of salt.  It may be real.  Perhaps it was that fragment from Comet 73P, lol.

YAHWEH bless you and your family in His super-abundance of grace, mercy and love through His son Messiah Y’shua. 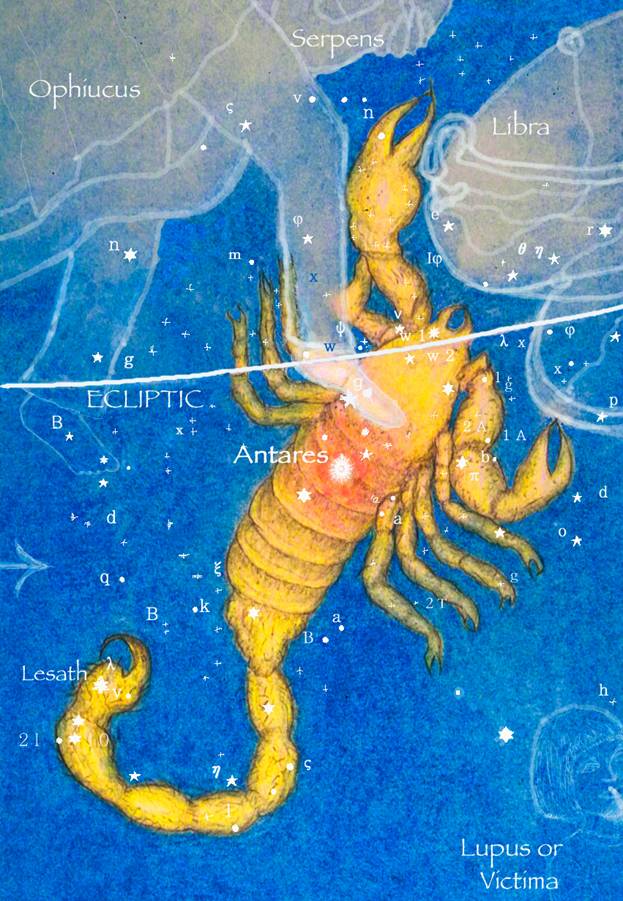 Isidis (Copt.) – the attack of the enemy, or oppression

Genesis 3:15 (NIV) – “And I will put enmity between you and the woman, and between your offspring and hers; he will crush your head, and you will strike his heel.”

Stars in Scorpio and the meanings of their names

Antares (Arab.) – the wounding.  Antares is the brightest star in Scorpio.  Antares from the Greek and Latin  means rival of Ares or rival of Mars since Ares is          the ancient Greek and Roman name for Mars.  Ares was the Greek and Roman god of war.  In one of its portrayals, Mars represents the warrior angel Michael who wars against the enemy of God’s people.   Antares, in the heart of the scorpion, is the rival of Mars or enemy of Mars.

We see in this picture the prophecy of Genesis 3:15 with the man’s foot coming down on the scorpion’s head (represents the serpent’s seed) to crush it, and the poisonous stinger of the scorpion poised to strike the heel of the man (the woman’s Seed).   This is the enmity and conflict that we see throughout the Scriptures.

Throughout history Satan and Satan’s seed has tried to destroy the line from which the woman’s seed was to come and finally the promised Seed Himself.  In the book of Jasher (not a canonical book of the Bible, but considered a historical book) the king sent men out to kill Abraham soon after he was born, but was unsuccessful.  At the time of the birth of Moses, Pharaoh commanded that all Israelite male children born be thrown into the river and drowned, but was unsuccessful in cutting of the bloodline to the Messiah.  In II Kings 11 Athaliah was used to destroy all the royal seed but the king’s son was rescued from among the slain.  In the book of Ruth we see Haman trying to completely wipe out all the Jews, but was unsuccessful and he himself was destroyed instead.  When the Messiah Yahshua (Jesus) was born, Herod sent out an army to destroy him.  But again the Devil was unsuccessful.  Yahshua received the wounding in the heel at the Cross.  It was there Satan struck the woman’s Seed.  The Messiah did die, but was raised from the dead to destroy the works of the Devil.  Forty days after His resurrection Yahshua ascended into heaven to be seated at the right hand of God his Father until all enemies are put under his feet.  Ten days after that, the “comforter” was sent, the gift of holy spirit from The Holy Spirit, to ever be with and within all who confess with their mouths the Lord Yahshua (Jesus) and believe in their heart that God raised him from the dead (Rom 10:9-10).   That was a major blow to the Devil’s head, but there is more crushing to follow.