Nehemia Gordon compiled the following New Moon Report for the month of July 2006 and the beginning of the Fifth Month of the Biblical Calendar.

“On Wednesday July 26, 2006 the New Moon was sighted from Israel.  The moon was first sighted by Miri Burgin at 19:52 from Jerusalem.  Over the next few minutes the moon was also sighted by the following observers from Jerusalem:  Nehemia Gordon, Devorah Gordon, Ferenc Illesy, Neria Haroeh, Rob Auston, Yohanan Savage, Yahshua Martinez, Jeremiah Martinez, and Andrew Haymore.”

MERCURY AND SATURN IN CONJUNCTION

The planets Mercury (Catab) and Saturn will come into conjunction (same celestial longitude) on August 21, 2006.  This is not a particularly rare event in and of itself, since Mercury comes into conjunction with Saturn at least once every year.  There are, however, other celestial events in the week to follow this event that makes it of notable interest, though I do not believe that this is a precursor to Armageddon as some would have us believe.  There has been a lot of false and erroneous information about the celestial events of late August going around the internet.  Much of this information is from Astrology and has nothing to do with Biblical Astronomy, therefore I will not bore you with all the details. 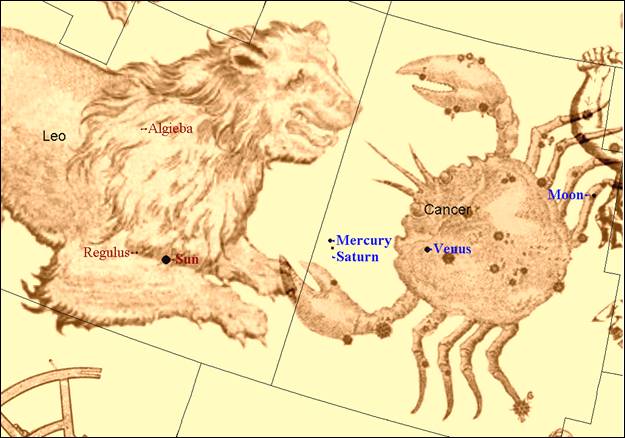 In the early morning skies on August 22, there will be a unique massing of Venus, Mercury, Saturn and the waning crescent moon.  This is displayed in the picture below. 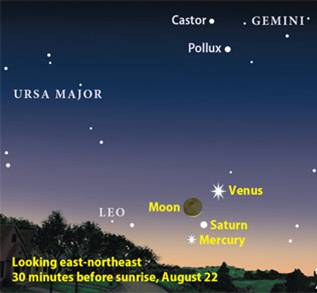 This is of interest in the fact that it could possibly be a sign to radical Muslims to attack their enemies.   Here is a bright crescent moon, not only with the bright planet Venus, but also with Saturn and Mercury.  There have been major attacks in the past from such groups when the crescent moon was next to a bright planet.  Then of course, the current leader of Iran is proclaiming that Armageddon will begin on August 22, 2006.  The date of this writing is August 21.  Due to a number of circumstances, this month’s issue of Biblical Astronomy is late (at least 10 days later than originally planed).   It will be in the post office and on its way to you on August 22.  You should know by the time this reaches you if Armageddon has yet begun.  I think it is just a lunatic rattling his saber and trying to make people nervous.  But then again, perhaps the thwarted plan to blow up 10 jumbo jets over the Atlantic Ocean on September 16 was the first of a planned series of attacks.  Either way, do not be troubled by these matters, for as it is written of the spoken words of Y’shua – “And ye shall hear of wars and rumours of wars: see that ye be not troubled: for all these things must come to pass, but the end is not yet.”

Chart 419 shows the positions of Venus and Saturn in the constellation Cancer as seen from Jerusalem Israel about thirty minutes before sunrise at the time of conjunction.  Even though the label for Saturn on the chart is well below Venus, there is an arrow to the left of Saturn (hard to see here) pointing to where the planet is.  In this chart, the two planets appear as one and both are in the dot to the left of the label for Venus. 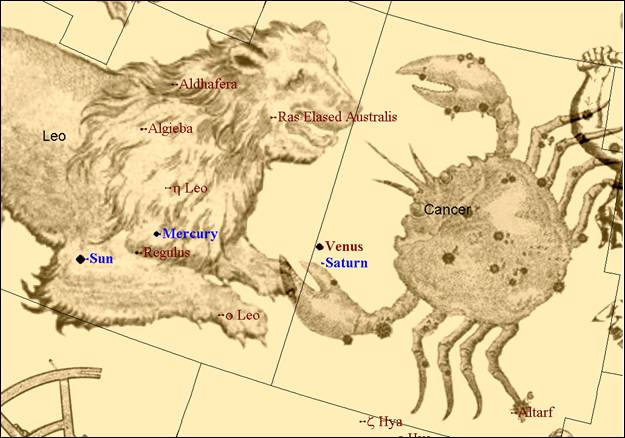 This conjunction is real close to the borderline between Cancer and Leo.  According to the late Dr. Earnest L. Martin, this was a point of interest at the time of Messiah’s birth.  The following are excerpts from his book The Star of Bethlehem: The Star That Astonished The World (Second Edition – 1996) pp12-15.

This means that the “morning star” conjunction of Jupiter and Venus in August 12, 3 B.C. happened at the conclusion of the astrological year, while the “evening star” reunion some ten months later occurred in the beginning of a new astrological year.  These two unions of Jupiter and Venus could well have been interpreted as showing a close on one age in history and the beginning of another age in 2 B.C…..

As mentioned earlier, the zero line for beginning and ending the 360 degrees of the Zodiac was reckoned by some astrologers as existing between Cancer and Leo (The Encyclopedia of Religion and Ethics, XII.51).  This means that this motion effect shown by Jupiter circling around Regulus (like a “crown” over the star) was happening in the heavens just east of the zero degree line for astrological measurements.  It occurred at the beginning section of the astrological Zodiac in the view of some Gentile astrologers.  This interpretation is similar to that adopted by Moses in his arrangement of the armies of  Israel in the fashion of the Zodiac around the Tabernacle in the wilderness.  The biblical Zodiac designed by Moses also began with the royal sign of Leo, but its zero degree line was located in the middle of the constellation, not at its beginning.  Whatever the case, these indications would surely have shown to the people of that era that a great king or ruler was then being introduced to the world.” 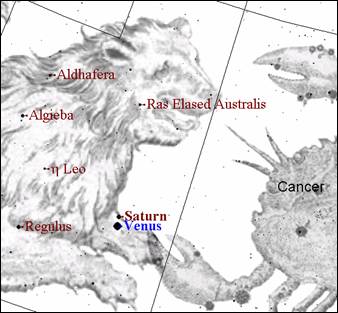 At any rate, these are continuing signs in the constellation Cancer that started in June.  See the June 2006 issue of Biblical Astronomy for more information concerning these events.

Mars will be barely visible, if visible at all, on the evening of August 27 this year.  Below is an article from Astronomy Magazine’s e-mail Astronomy News released on August 18, 2006 concerning Mars.

Mars to leave our skies for a while

“Head out at dusk if you want a final glimpse of Mars before winter. The Red Planet appears as a modest star low in the western sky about 30 minutes after sunset. It shines at magnitude 1.8, similar to the brightest stars in the Big Dipper. By month's end, Mars becomes lost in the twilight. Your last good chance to spy the planet occurs August 25, when a 2-day-old crescent Moon lies 5° to the left and slightly above the planet.”

Hosted by Congregation Tree of Life

If you desire to have a Biblical Astronomy seminar in your area contact me (Bob Wadsworth) at starguy1@comcast.net or 503-655-7430.

Yahweh watch over you and keep you. 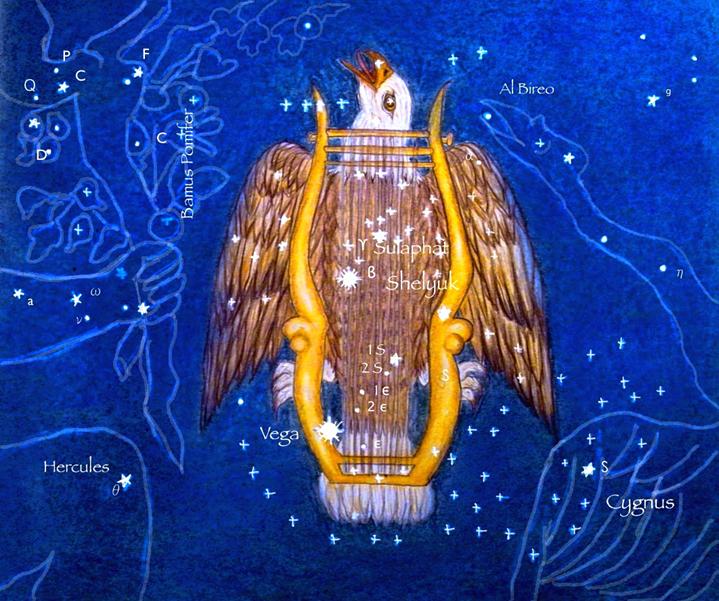 Praise prepared for the conqueror

Complementing Scriptures to this constellation picture

Psalm 21:1, 8, 10-13 – “The King shall rejoice in Thy strength, O LORD; And in Thy salvation how greatly shall He rejoice!…Thine hand shall find out all Thine enemies; Thy right hand shall find out all that hate thee…Their fruit shalt Thou destroy from the earth; And their seed from among the children of men.  For they intended evil against Thee; They imagined a mischievous device which they are not able to perform, Therefore shalt thou make them turn their back, When Thou shalt make ready Thine arrows upon Thy strings [And shoot them] against the face of them.  Be thou exalted, LORD, in thine own strength; SO WILL WE SING AND PRAISE THY POWER.”  (This scripture complements both the main constellation Sagittarius (the Archer) and this decan constellation, Lyra (the harp – Praise prepared for the conqueror).  Also see Revelation 11:17 and 19:7.

Stars in Lyra and the meanings of their names

Vega (Heb.) – He shall be exalted.  It is also from the word Vega which our own word victory has come.

Sulaphat (Heb.) – springing up, or ascending.

The following is from The Witness of the Stars, by E.W. Bullinger (1893), pp. 67-68 concerning the constellation Lyra.

“In the Zodiac of Denderah, this constellation is figured as a hawk or an eagle (the enemy of the serpent) in triumph. Its name is Fent-kar, which means the serpent ruled.

There may be some confusion between the Hebrew Nesher, an eagle, and Gnasor, a harp (In our picture we have combined the two great thoughts, taking the harp from a picture dug up at Herculaneum, and adding an eagle soaring up with it); but there can be no doubt about the grand central truth, that praise shall ascend up "as an eagle toward heaven," when "every creature which is in heaven, and on the earth, and such as are in the sea, and all that is in them," shall send up their universal song of praise: "Blessing, and honour, and glory, and power, be unto Him that sitteth upon the throne and unto the Lamb for ever and ever. Amen" (Rev 5:13,14).

And for what is all this wondrous anthem of praise? Listen once again. "Alleluia *: Salvation, and glory, and honour, and power, unto the Lord our God; for TRUE AND RIGHTEOUS ARE HIS JUDGMENTS...And again they said Alleluia" (Rev 19:1-3).”

* This is the first time that the word “Alleluia” occurs in the “New Testament”, and it is praise for judgment executed.  Its first usage in the “Old Testament” occurs in Psalm 104:35, where we have the very same solemn and significant connection.

Psalm 104:35 – “Let the sinners be consumed out of the earth, And let the wicked be no more.  Bless thou the LORD, oh my soul, HALLELUYAH (Praise ye the LORD).”