Nehemia Gordon from Jerusalem, Israel compiled the following New Moon Reports for October 2007 and the beginning of the Eighth Month of the Biblical Calendar.

“On Friday October 12, 2007 observers from several locations in Israel looked for the moon but it was not sighted.  We received a report from two observers who thought they saw the moon from Haon on the east coast of the Sea of Galilee.  However, they reported seeing the moon at 17:35, which was four minutes AFTER moonset.  Obviously the moon cannot be seen after it has set and therefore this reported sighting cannot be accepted as valid.  The moon should be easily visible tomorrow night.”

“On Saturday October 13, 2007 observers across Israel looked for the moon but it was not sighted due to heavy cloud coverage.  Even though the moon was not sighted, tonight is still new moon day by default since the month cannot be more than 30 days.

The next new moon is expected to be visible from Jerusalem near sunset on November 12 with a possibility that it will be seen the evening before, November 11, when the moon will be 2% illuminated and 5 degrees above the horizon at 5 minutes after sunset.  We will find out which evening the first crescent of the new moon is seen from the next New Moon report.

On October 23rd, Comet Holmes (17P) was continuing its journey away from the inner solar system after reaching its closest approach to the sun

in early May 2007 at a distant 191 million miles or over twice the average distance that the earth is from the sun.  On October 23rd the comet was a magnitude 17 in brightness, or about 25,000 times fainter than the faintest star that can normally be seen with the naked eye.   On October 24th the comet was over 226 million miles from the sun and about 150 million miles from Earth when it suddenly went into an outburst and within 36 hours increased in brightness nearly a million fold.  It went from a magnitude 17 to a magnitude 2.3 and became easily visible to the naked eye even in sky filled with the bright moon light of a full moon and city lights.

Below is a photo of Comet Holmes (17P) taken by Kenneth Blumberg from New York City on October 31, 2007.   The comet does not have a pronounced tail. 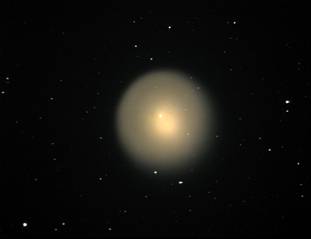 This comet has astonished, as well as puzzled, astronomers across the globe.  There has never been a comet in known or written astronomical history of such a large outburst of a comet that suddenly increased a million fold in brightness.  The cause of this outburst is a mystery but some believe that the comet split in two.

Robert E. Parker who is a subscriber to Biblical Astronomy first notified me of this comet.  I was still recovering from two weekend seminars and a two-week trip to New York and Ohio and had not been keeping up on the news.  As I was slowly getting back to normal and wondering what to write about for the November newsletter (there wasn’t much going on in the heavens except for the Leonids meteor shower) I received an e-mail from Robert E. Parker describing this strange comet.  When I checked into it I became very excited.  Then I went out that evening (October 25th) to see if I could spot it.  There was a full moon out but I could still see the comet without optical aide from the apartment complex where I live.  I went out every night the sky was clear (which is a rare event itself in late October in Oregon) and the comet became apparently brighter as the moon came up later each evening and its light was not a factor after 3 or 4 days.  The comet is now easily visible to the naked eye and a wonderful binocular object.   Below is a finder chart for late October and early November. 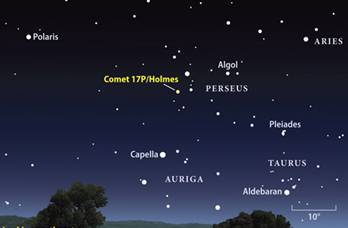 Looking toward the northeast about 9:30 in the evening the star Capella is the brightest start.  Looking north and a bit east from Cappella the next brightest star is Mirfak in Perseus.  Mirfak is not labeled in the above chart but is the bright star above the comet in the chart.  If you point your binoculars in the direction of Mirfak and the star and comet below it, you should be able to easily find the comet.  In binoculars the stars appear as points of light, but the comet will appear like a fuzzy ball.

Charts 450 and 451 show the path of Comet Holmes (17P) through the constellation Perseus from October 25, 2007 to January 22, 2008.  When the comet went into outburst on October 24 it was just above the thigh of Perseus.  On January 22, 2008 it will be in a very close conjunction (within 1/6th of a degree) with the star Algol (the ghoul or evil spirit) that is the main star in Rosh Satan, the head of Satan.  This is the head that Perseus is holding up with his left hand. 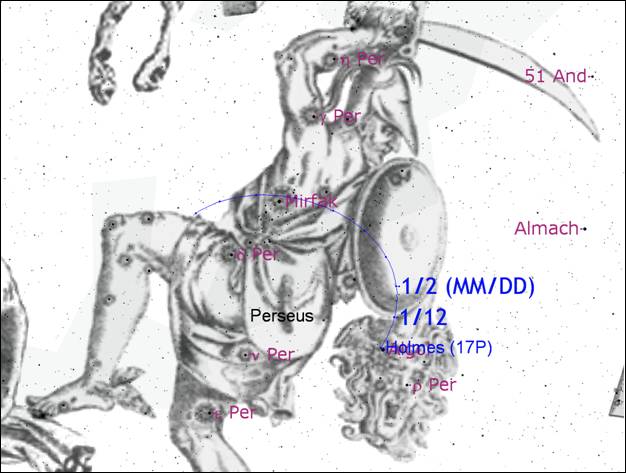 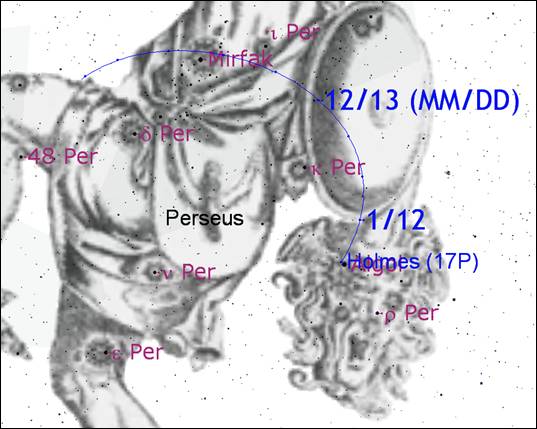 There was a foreshadowing of this event when David destroyed another beast that came up against Israel whose was name was Goliath.  David slung a stone into the forehead of Goliath and then took Goliath’s sword and cut the beast’s head off.  Then later came before Saul holding the head of Goliath in his hand (I Samuel 17:57).

I sent a chart of this course to Robert E. Parker who e-mailed me the first info that I received on this comet.  He replied:  “To me it is as if the arc of the path of the comet is the path of the sword of "The Breaker " as it cuts off Satan’s head.  Very powerful imagery.”  Well, indeed it is and it may be portraying just that.

There is a real good possibility that this comet will remain visible to the naked eye for weeks to come.  It is also possible that it will still be visible on January 22, 2008.  We will just have to wait and see. 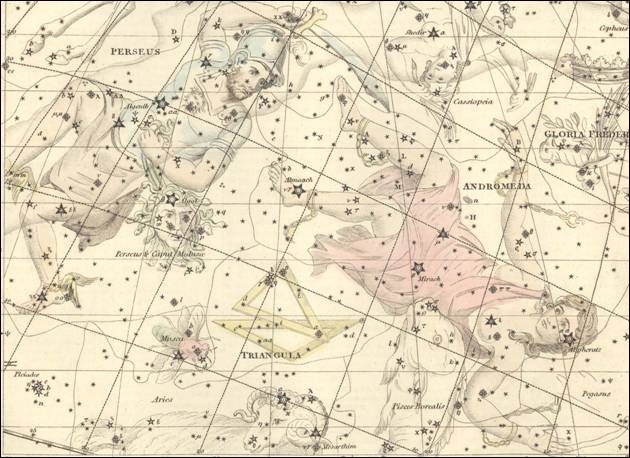 Chart 452 is from Jamieson’s Star Atlas (1822) showing the constellations Perseus and Andromeda and the portrayal of Peretz delivering His captive Bride.  The large star in the head of Satan is Algol.

The Leonids Meteor shower will peak in the pre dawn hours of November 18.  The chart below shows the radiant of the shower in the head of the Lion. 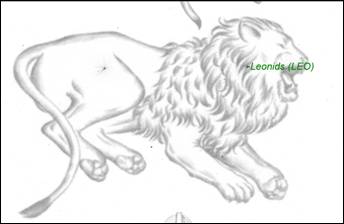 The lion is not expected to roar too loudly this year.  It is expected that at the peak of the shower there will be only about 12 meteors per hour that will be visible.  This is a normal rate for the Leonids shower.  At the turn of the century there were a few years that the Leonids showered meteors at the rate of hundreds per hour.  It may be some time before we see that again.

It may be a few more months before Michele gets started back with our project of restoring the constellations.  In the meantime, I am going forward with the monthly articles on the constellations and their Biblical meanings.  I will be using pictures from Jamieson’s Star Atlas (1822).  I will also be using these in the third edition of A Voice Crying in the Heavens for the constellations that Michele has not yet done.  I hope to have all of the constellations done and posted on the website by late December or early January.  I will replace the pictures with Michele’s as she finishes them. 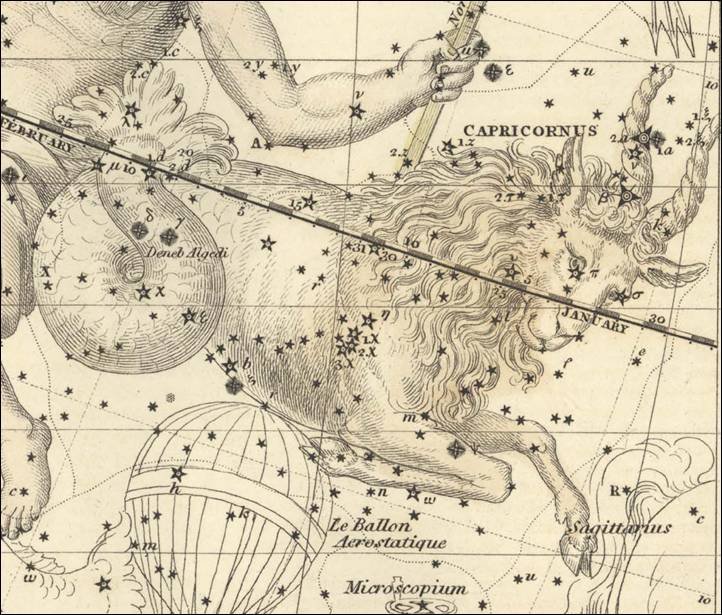 The goat of atonement slain for the redeemed

Ancient Names for this Constellation

Capricornus (Lat.) – the goat, the atonement, sinking down.

Leviticus 9:3 (NKJV) – And to the children of Israel you shall speak, saying, “Take a kid of the goats as a sin offering…

17Why have you not eaten the sin offering in the holy place, since it is most holy, and God has given it to you to bear the guilt of the congregation, to make atonement for them before the LORD?

Isaiah 53:5, 8 (NKJV) – 5But He was wounded for our transgressions, He was bruised for our iniquities; The chastisement for our peace was upon Him, And by His stripes we are healed.  8…For the transgressions of My people He was stricken.

Romans 5:11 (KJV) – And not only so, but we also joy in God through our Lord Jesus Christ, by Whom we have now received the atonement.

Stars in Capricornus and the meaning of their names

Sa’ad al Naschira – the record of the cutting off.

The following is from Joseph Seiss’ The Gospel in the Stars, pp. 63-64 concerning Capricornus.

“First of all, we have here the figure of a goat.  This is a sacrificial animal.  God commanded the children of Israel, saying, “Take ye a kid of the goats for a sin-offering” (Lev. 9:31).  So Aaron “took the goat, which was the sin offering for the people, and slew it, and offered it for sin” (Lev. 9:15).  And of the goat of the sin-offering Moses said, “It is most holy, and God hath given it you to bear the iniquity of the congregation, to make atonement for them before the Lord” (Lev. 10:16, 17).

In the next place, this goat is fallen down in the attitude of dying.  His one leg is doubled under his body, and the other is powerless to lift him up.  His head is drooping and sinking in death.  This is the identical falling and dying of Christ as the sin-offering to which He refers in the text.  It is the same Seed of the woman, in the attitude and condition of a sacrifice for sin.  Christ surely was “wounded for our transgressions” and “bruised for our iniquities.”  “He was cut off out of the land of the living; for the transgression of my people was He stricken.”  As the Head of the flock He suffered in their stead, and laid down His life in sacrifice that they might live.  And here it is written on the stars from the earliest ages, and with a vividness of pictorial representation which no one can contemplate without realizing that the picture is intensely striking…”

…And if there is any significance whatever in these celestial pictures, we have in this sign the symbol of sacrificial death, which is the exact idea of the text.

But it is at the same time a picture of another kind of life, developed out of this sacrificial death, and vitally conjoined with it.  The body of the fallen and dying goat terminates in the body and tail of a vigorous fish.  The living fish thus takes its being out of the dying goat, and has all its life and vigor from thence.  Accordingly, the Coptic name of this sign signifies the station or mansion of bearing.  In addition to the falling and dying, it is the sign of a mystic procreation and bringing forth.  That which is brought forth is a fish, which is again a familiar well-understood sacred symbol.

When Jesus called the appointed His first ministers He said, “I will make you fishers of men” (Matt. 4:19).  So when God said He will bring the children of Israel again into their own land, His word was, “I will send for many fishers, and they shall fish them” (Jer. 16:15, 16).  So in Ezekiel’s vision of the holy waters the word was, “And there shall be a very great multitude of fish, because these waters shall come thither” (Ez. 47:1-9).  Christ speaks of His saved ones as “born of water” (John 3:5).”

In other scriptures as well, God’s people are contemplated as fishes.  The tail of the fish in Capricornus represents the resurrection life of Y’shua Messiah.  Both his resurrection from the dead, and the resurrection of His people made possible through His atoning blood.