Nehemia Gordon from Jerusalem, Israel compiled the following New Moon Report for the month of June 2008 and the beginning of the Third Month on the Biblical Calendar.

“On Wednesday June 4, 2008 the New Moon was sighted from Ashdod at 20:09 by Magdi Shamuel and Eli Shamuel and from Jerusalem at 20:10 by Johan Schutte and Nehemia Gordon.

The next new moon is expected to be visible from Jerusalem near sunset on July 4, 2008 when it will be 3% illuminated and 15o above the horizon at 5 minutes past sunset.

Two days after the new moon of July 4, the bright crescent moon will be near to the planets Adom (Mars) and Saturn and the star Regulus on July 6, in the constellation Arieh (Leo).  This will be a real neat event to view, so mark it on your calendar.  The diagram of the event is below in case you miss it.  It should be visible from 30 minutes after sunset to one hour after sunset above the western horizon. 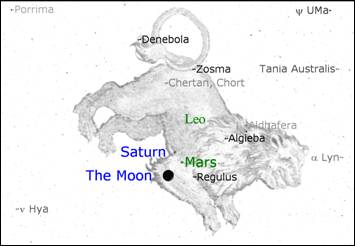 Since the July newsletter will most likely not be published until mid-July and there is not much going on in June, I will write of three events that will be occurring between July 1 and July 11.  The first event is a conjunction of the planet Adom (Mars) and the star Regulus in the constellation Arieh (Leo) on July 1, 2008.  One of the portrayals of the planet Adom is blood and war.  It also represents Michael the warrior angel.  As written before, Arieh represents the Lion of the Tribe of Judah and Regulus is the king star of the constellation as well as the king star of the universe.  It represents the King of Judah and the King of the Universe.  The Lion is making war or about to tear apart the serpent Hydra which is a decan constellation of Arieh.  The serpent or dragon is also the archenemy of Michael.  It is Michael and his armies who go to war against the dragon and his armies in Revelation 12.

Chart 460 shows the conjunction of Mars and Regulus as seen above the western horizon from Jerusalem about an hour after sunset.  Mars and Regulus will come to within 0.7o from each other at their closest approach. 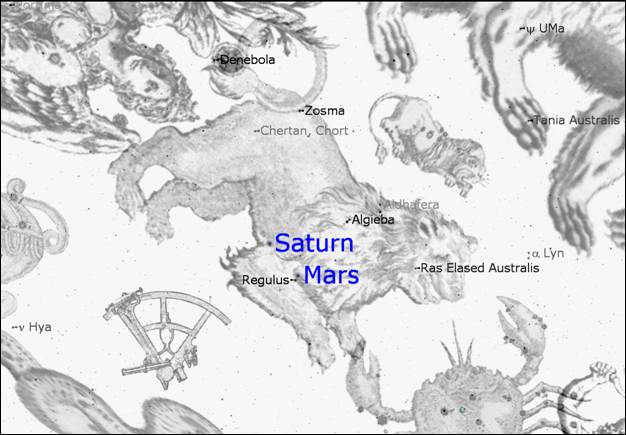 The planet Zedek (Jupiter) will come into opposition (its closest approach to the earth for the year and shining at its brightest) on July 9, 2008.  Zedek will be in the constellation Sagittarius at the time of opposition.  Zedek represents (THE LORD OUR RIGHTEOUSNESS).  One of the decan constellations to the Sign Sagittarius is Draco (the Dragon), which is seen hurling head first toward the earth, as being cast down.

Chart 461 shows the position of Jupiter in Sagittarius at the time of its opposition.  Jupiter will be at magnitude –2.73 at that time. 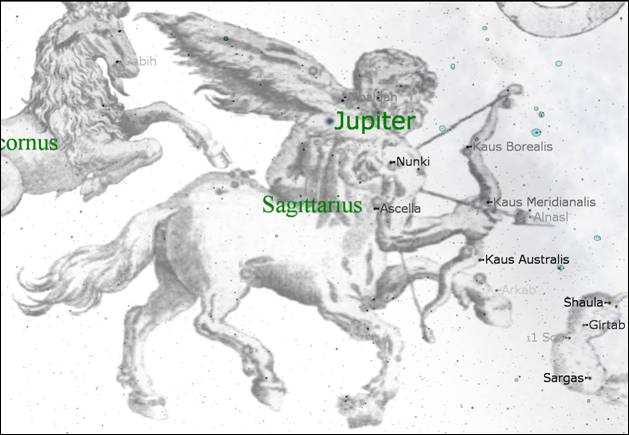 Chart 461 – Jupiter at opposition in the constellation Sagittarius on July 9, 2008

MARS AND SATURN IN CONJUNCTION

The planets Adom (Mars) and Saturn will come into conjunction on July 11, 2008.  Again, one of the portrayals of Mars is Michael and Saturn represents Satan in the portrayal of the war between the Woman’s Seed and the serpent’s seed.  This conjunction will take place in Arieh the Lion.  The Lion is portrayed as about to pounce on and tear apart the serpent (Hydra).

Chart 462 shows the positions of Mars and Saturn in Leo at the time of conjunction as seen in the early evening sky above the western horizon from Jerusalem.  The two planets will come within 0.7o from each other at their closest approach.

Mars and Saturn will not rendezvous in the Lion again for about another 30 years. 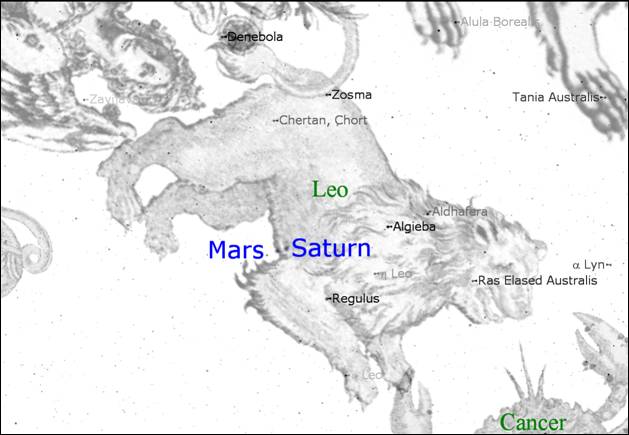 There is a possible naked eye comet now in the southern hemisphere and about to enter the northern hemisphere.  The name of the comet is Comet Boattini (C/2007 W1).

The following article on the comet was posted on the Sky & Telescope website by Tony Flanders on May 16, 2008 and updated on June 6, 2008.

“Serious comet chasers — people who track faint comets with telescopes and binoculars — have been aware of Comet C/2007 W1 (Boattini) for quite a while. It was forecast to become quite bright for a telescopic comet, 6th or perhaps even 5th magnitude, making it visible without optical aid to skilled observers at dark sites.

For a while, Boattini exceeded its brightness predictions by more than a magnitude. Now it has settled back to its predicted behavior. If it bumps up again — and that's a very big if! — it could become fairly prominent low in the east before dawn in July.

Right now (June 6th) the comet is deep in the southern sky and nearing the Sun, so it's visible only from the Southern Hemisphere. There, people have been seeing it without optical aid under ideal conditions. In late May Boattini was also spotted by many binocular observers in the southern tier of the

As of early June the comet is crossing southern Canis Major. If you're at the latitudes of Australia and New Zealand, start looking for it in late twilight, and continue until the Sun's afterglow has completely disappeared. Click here for a detailed, full-page, printable chart showing the comet's path south of Sirius.

The comet passes directly south of the Sun in mid-June, making it invisible to anybody north of Antarctica.

Boattini will emerge from the Sun's glow around the beginning of July as an early-morning object, low in the east, for observers in both the Northern and Southern Hemispheres. What it will look like then is anybody's guess. Most likely, it will be a pleasant though unspectacular little binocular target. There's a small but significant chance that it will become brighter than any comet since Holmes's spectacular outburst late last year.

And there's an even smaller chance that the comet will disintegrate entirely while it's hidden in the Sun's glow and never be seen again. It wouldn't be the first time that's happened to a comet.

Here's a light curve and chart of its future path. Stay tuned to SkyandTelescope.com, and we'll keep you posted on the developments. “

Chart 463 shows the path of the comet from June 16, 2008 to November 1, 2008.  The comet was at its closest approach to the earth on June 16 and was shining at about a magnitude 5.0.  The comet was in the constellation Lepus at that time.  Lepus is actually a serpent that Orion is about to tromp on.  The constellation pictures here are not the best.  Though it is a newer version of Starry Night, many of the pictures leave much to be desired.  This is the only version that I could get the new comet at this time.   The comet will go through Eridanus, the river of fire, part of Taurus, then on to Aries and Pisces.  If the comet brightens, then I will have more on this later. 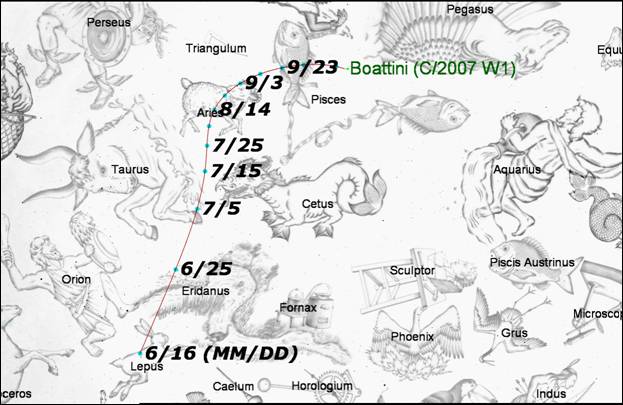 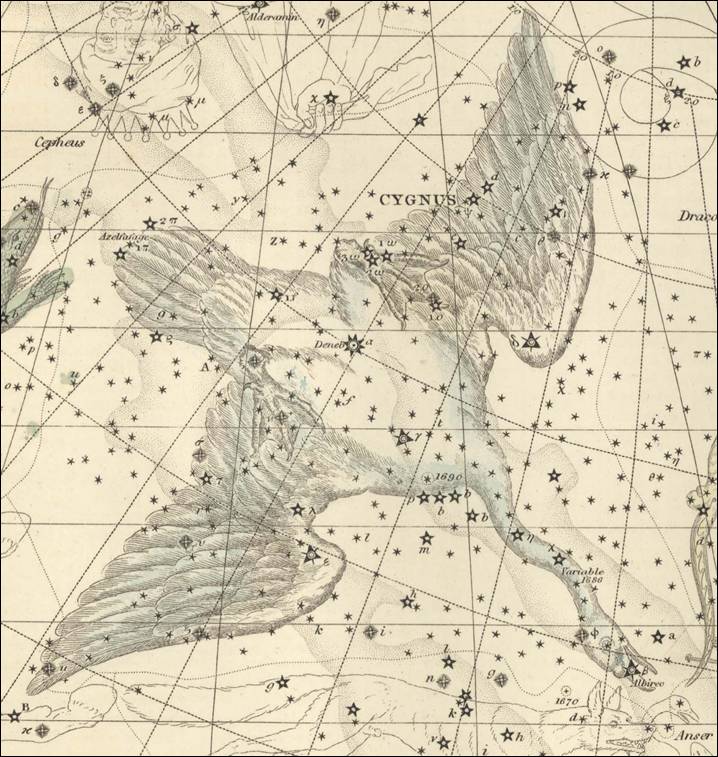 Ancient Name for this Constellation

Stars in Cygnus and the meanings of their names

In some of the zodiacs of Arabia this constellation was known as Al Tair al Arduf, the Flying Eagle.  It has come down to us as a swan from other ancient zodiacs.  From Richard Hinkley Allen’s Star Names (1899) pp. 194, 195 – “Caesius thought that the constellation represented the Swan in the Authorized Version of Leviticus 11:18, the Timshemath of the Hebrews; but this is a Horned Owl in the Revision, or may have been an Ibis.  Other Christians of his time saw here the Cross of Calvary, Christi Crux, as Schicknard had it, Schiller’s Crux cum S. Helena; these descending to our day as the Northern Cross, well known to all and to beginners in stellar observations probably better than by the stars’ true title.”

From Joseph A. Seiss’ The Gospel in the Stars (1882) pp. 78, 79 – “As the white dove is the emblem of the Holy Ghost, so the elegant, pure, and graceful swan is a fitting emblem for Him who, dying, sends forth the glad river of living waters, and presides in His majesty over the administration of them to the thirsty children of men. And this is here the underlying idea.

But this swan is on the wing, in the act of rapid flight, “circling and returning,” as its name in Greek and Latin signifies.  It seems to be flying down the Milky Way, in the same general direction with the river which pours from the heavenly urn.  The principal stars which mark its wings and length of body for a large and beautiful cross, the most regular of all the crosses formed by the constellations.  It is thus the bird of matchless beauty, purity, dignity, and grace, bearing aloft the cross and circling with it over the blessed waters of life; whilst in the naming of its stars, the brightest is Deneb, the Lord or Judge to come; Alzel, who goes and returns; Farfage, glorious, shining forth; Sadr, who returns as in a circle; Adige, flying swiftly; Arided, He shall come down; and other words of like import, we find strong identifications of this lordly bird-king of the waters with Him who, through the preaching of His cross hither and thither, over all this nether world, cries and says “If any man thirst, let him come unto Me, and drink.”

E.W. Bullinger’s The Witness of the Stars (1893) pp. 91, 92 – “This mighty bird is not falling dead, like Aquila, but is flying swiftly in mid-heaven.  It is coming to the earth, for it is not so much a bird of the air, but a bird peculiarly belonging to both the earth and waters.

By His atoning death (as set forth in Capricornus) He has purchased and procured unspeakable blessings for His redeemed.  This sign (Aquarius) tells of those blessings being poured forth, and of the speedy return of Him who is to bring “rivers of blessing,” and to fill this earth with blessing and glory “as the waters cover the sea.”

“Then take, LORD, thy kingdom and come in Thy glory;

Make the scene of Thy sorrows the place of Thy throne.

Complete all the blessings which ages in story

Have told of the triumphs so justly Thine own.”