Nehemia Gordon from Jerusalem, Israel compiled the following New Moon Reports for the month of October 2008 and the beginning of the Seventh and Eighth months on the Biblical Calendar.

Last night (Thursday Oct. 30) visibility was uncertain.  In most months visibility can be predicted (assuming no clouds) by comparing the astronomical data of the month in question with that of previous sightings.  However, in the minority of months visibility simply cannot be predicted with any certainty nor can it be entirely ruled out.  In such instances we go based on raw 30th day sighting which means we look for the moon on the evening that begins the 30th day.  If the moon is sighted then the “30th day” becomes the 1st day of the new month.  If the moon is not sighted then the new month begins the following evening.  This month visibility could not be predicted on the evening that began the 30th day (Thursday evening).  Because the moon was not sighted on Thursday evening, Friday evening automatically became the beginning of the new month.”

The next new moon is expected to be visible from Jerusalem on November 29, 2008 when the moon will be 3% illuminated and 10o above the horizon at 5 minutes past sunset.

It is that time of the year again for the Leonid Meteor shower.  The Leonids are known for good shows at their peak on November 17.  There have been meteor storms in the past that have produced hundreds of meteors per second.  In most years the shower produces around 50 meteors per hour.  This year will be a very dull year for the yearly shower.  It is expected to produce only about 10 meteors per hour and the bright glare of the moon will be blocking many meteors from being seen with the naked eye and take away from the brightness of the ones that are seen.

The radiant (where the meteors appear to come from) of the Leonid shower is in the head of Leo or Arieh (the Lion).  I have dubbed this meteor shower, as have others, “the roar of the lion.”  This year there will not be much of a roar.

Chart 478 shows where the radiant of the Leonid meteor shower is in the head of the Lion.  This modern version is not an ideal picture for Arieh.  The lion is seen here laying down.  In most ancient zodiacs the lion is standing or pouncing.  However, this is the only astronomy program that I have that shows the pictures of the constellations and the radiants of meteor showers.  You will have to use your imagination to correctly see the lion pouncing.  The Lion is pouncing on the serpent (not shown) and here is roaring at the same time.  Next year shows promise of a better Leonid shower. 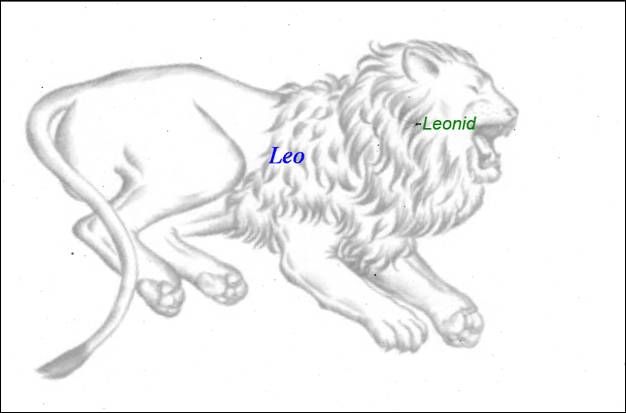 JUPITER, VENUS AND THE MOON

There will be a grand display of the newly waxing bright crescent moon and the bright planets Zedek (Jupiter) and Nogah (Venus) in the early evening sky in late November and early December.

At the new moon on November 29, the two planets will be seen at a bit of a distance above the crescent moon.  The moon will close in on Zedek and Nogah in the following two nights.  The chart below shows the positions of the moon and two planets as seen from the United States at one hour past sunset on November 30th.  That will be a nice site to see. 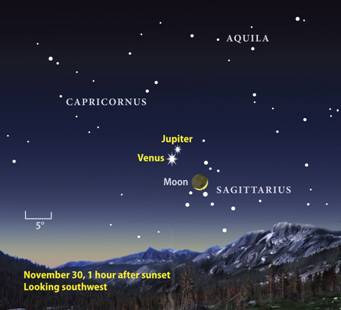 The chart below shows the position of the three heavenly bodies on December 1st as seen from the United States.  At that time Jupiter and Venus will be in conjunction; a better sight to see. 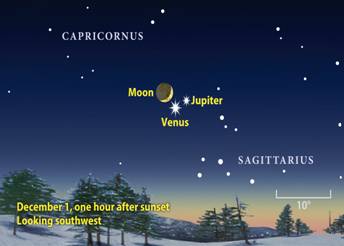 The crescent moon will still be below the two planets when this is seen from Israel seven hours earlier (from the east coast of the U.S.) on the evening of December 1.

Chart 479 shows the positions of the bright crescent moon, Venus and Jupiter in the constellation Sagittarius as seen from Jerusalem about an hour after sunset on December 1, 2008.  The bright crescent moon is under and close to Venus at that time.  It is about as close to Venus as it is shown in the December 1st chart above, but it is below Venus and not above it as seen from Jerusalem and the Mid-East.  The bright crescent light of the moon is bowed in the same direction as the bow held by Sagittarius here.  The crescent forms a cup under Venus.  It is  difficult to see the crescent in chart 479.  The arrow of Sagittarius is aimed at the heart of the scorpion (the star Antares).  See the July 2006 issue of Biblical Astronomy for more on the Sign Sagittarius with the star names and other pertinent information. 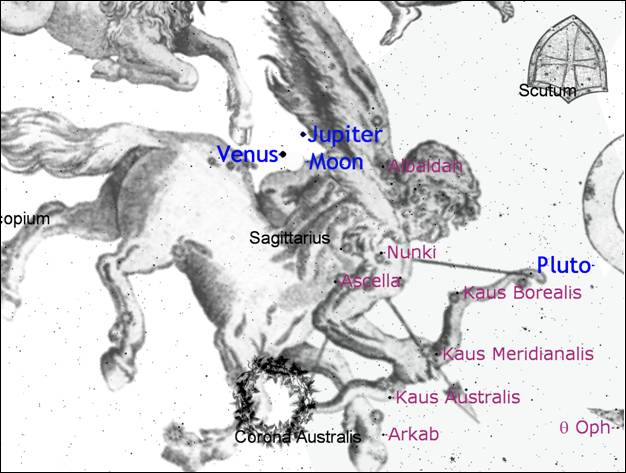 Elections come and go, Presidents come and go, but the Messiah Y’shua is forever and will soon come to set up His kingdom and rule on Earth.  God we do trust to bring to pass what is promised in His glorious word.  This present evil age will soon come to pass.  Have courage and do not despair or be dismayed of what must come to pass before that happens.  Look forward to the kingdom and inheritance promised to us.  He is certainly faithful who promised it.

Yahweh bless you and your families. 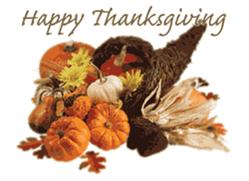 “A Voice Crying In The Heavens” 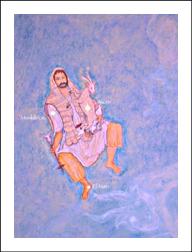 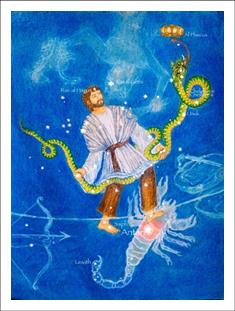 Session 1:  The Biblical meaning of the constellations and planets. The 48 constellations of the Mazzaroth will be covered in relation to the first and second appearing of the Messiah, and their relationship to Israel and the called out of God.

Session 3:  This session will discuss very rare celestial events concerning the Second Coming of the Messiah. From 1995 to the present certain events have happened that are pertinent to the return of the Messiah. More rare to very rare celestial events pertaining to the Second Advent of Messiah have occurred in the past eight years than at any other particular time in history.

This is a fascinating journey of biblical truth that every Person should experience.   You will never look at the sky and the stars the same ever again.  We hope to see you there.

You are welcomed to come visit the Biblical Astronomy Website at:  www.biblicalastronomy.com 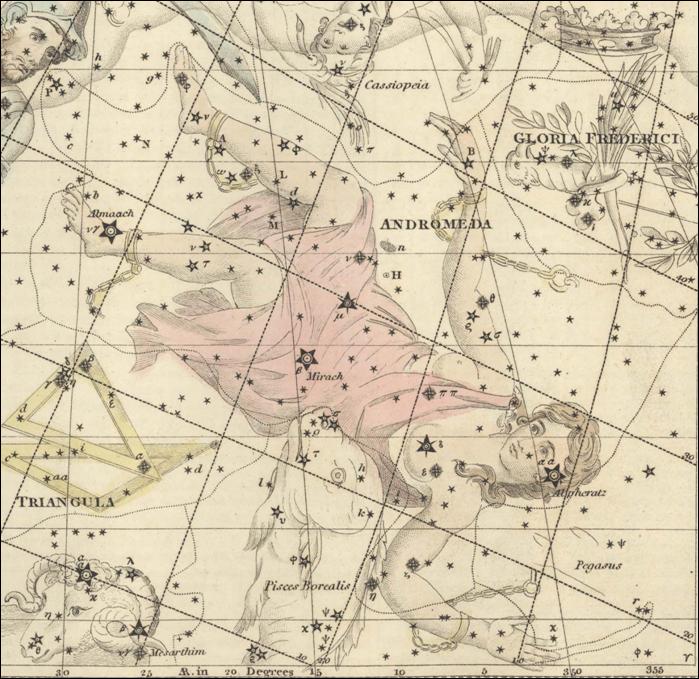 The redeemed in their bondage and affliction

Andromeda is a decan constellation to the Sign Pisces.

Persea (Heb.) – the stretched out.

"Hear now this, thou afflicted...
Awake, awake; put on thy strength, O Zion;
Put on thy beautiful garments, O Jerusalem...
Shake thyself from the dust;
Arise, and sit down, O Jerusalem:
Loose thyself from the bands of thy neck, O captive daughter of Zion.
For thus saith the LORD, Ye have sold yourselves for nought;
And ye shall be redeemed without money."

"O thou afflicted, tossed with tempest, and not comforted,
Behold,...in righteousness shalt thou be established:
Thou shalt be far from oppression; for thou shalt not fear:
And from terror; for it shall not come nigh thee.”

Jeremiah 14:17 - "The virgin daughter of My people is broken with a great breach, with a very grievous blow."

Stars in Andromeda and the meanings of their names

Al Phiratz (Arab.) – the broken down.  This star is in the head and is the brightest star in Andromeda.

ARATUS speaks of Desma, which means the bound, and says – “Her feet point to her bridegroom Perseus, on whose shoulder they rest. (The Witness of the Stars, E.W. Bullinger p. 102).

This constellation represents the betrothed or soon to be bride of Messiah Y’shua in bondage.  As with the main constellation Pisces, Andromeda represents Israel either going into bondage, in bondage (in chains), or coming out of bondage (when the chains are broken by the bridegroom).  Andromeda gives more insight of who the fish (Pisces) are.  They represent the Two Houses of Israel or the whole nation of Israel who (for those who are faithful in Y’shua) are the soon to be bride of Messiah.  Andromeda is seen as the freed Bride of Messiah in the constellation Cassiopeia, which is a decan constellation for the Sign Aries.  Perseus, also a decan constellation of Aries, represents the bridegroom, who is Messiah Y’shua.  In the Greek fables, it is Perseus who delivers Andromeda.  Those fables were born out of an ancient truth that The Almighty wrote in the heavens concerning His purposes and good pleasure about what is to come concerning His Son the Messiah and His people.

For all who have been born from above through Y’shua and have Christ (Messiah) in them, and they are in Messiah, their bonds to the god of this world have been broken.  Those who are not yet in Messiah are still in bondage.  There is still much to be done before the final chapter comes to a close.  To those who are in Messiah is given the ministry of reconciliation.  I strongly urge that we do not get so caught up into what at times seems like end-times fever that we neglect the main ministry that was given or assigned to us.