See the New Moon Report for the Eleventh Biblical month and the expected sighting of the next new moon in the January 2009 issue of Biblical Astronomy.

JUPITER AND MARS IN CONJUNCTION

There will be a host of interesting celestial events occurring between February 17 and March 8, 2009.  Leading the parade of events is a close conjunction of the planets Zedek (Jupiter) and Adom (Mars) in the constellation Capricornus before sunrise on February 17, 2009.

Chart 486 shows the ecliptic view of the constellation and the positions of the planets at the time of conjunction on February 17. 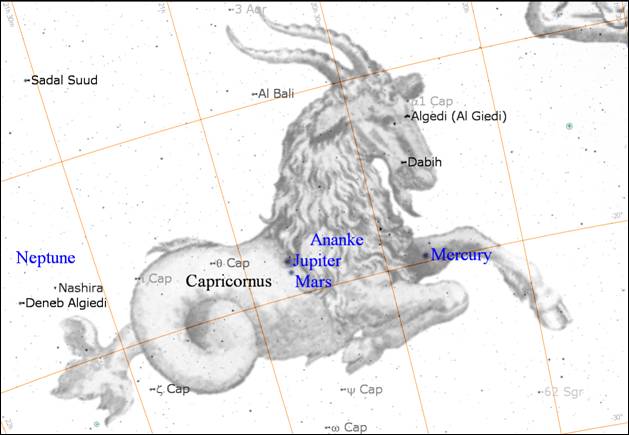 Capricornus represents the goat of atonement slain for the redeemed and the Sign portrays the crucifixion and resurrection of Yahshua HaMashiach (Jesus Christ).  Zedek represents either Yahweh or Yahshua, who is a High Priest according to the order of Melchizedek (Gen. 14:18 and Psa. 110:4 KJV spelling) forever (Heb. 5:6 – 7:17), who offered the final atonement with his own blood and death once and for all and for all time and for all mankind.

Adom (Mars) can represent Michael the warrior angel, blood and war, or the atoning blood of Messiah.  I believe in this particular event, it represents the atoning blood of Messiah since it is occurring in the constellation that represents the goat of atonement slain for the redeemed.  This event as well as the next two and final event mentioned in this newsletter concerning signs occurring in the Sign Capricornus, most likely serve as reminders of what Jesus Christ accomplished for the redeemed nearly 1,981 years ago as we approach the upcoming Passover season.

It was on January 26, 2009 that there was an annular solar eclipse in the heart of Gedi (Capricornus) – see the January 2009 issue of Biblical Astronomy.  Also take a look at the December 2008 edition of Biblical Astronomy for other celestial events that occurred in Capricornus in late December and early January.  All of these events in Capricornus make the constellation a major theme from December through March, again, leading up to the upcoming Passover season.

VENUS AT ITS GREATEST BRILLIANCY

Venus (Nogah) will be at its greatest brilliancy shining at magnitude –4.8 on the evening of February 19, 2009.  The brightest I have ever seen or heard of for Venus was a magnitude –4.7.  The February 2009 issue of Astronomy magazine shows Venus reaching magnitude –4.8.  If this is not a misprint, then we are in for a real treat.

The chart below shows Venus in Pisces (the nation of Israel) over the western horizon as seen from Jerusalem at 6:30 p.m. on February 19, 2009. 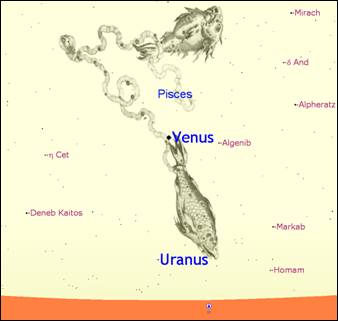 Venus (Nogah) represents Jesus Christ, the offspring of David, the Bright and Morning Star, even though it is seen in the evening here.  The ancient names for Venus – Nogah and Surath – mean bright and morning twilight respectively.

If you have clear viewing, it will be well worth your while to take a look at Venus over the western horizon in the early evening on February 19, just after dark (or a little earlier or a little later).  You can’t miss it.  It will be the brightest object in the sky.  Venus will also be nearly as bright a few nights before and after February 19.

MASSING OF JUPITER, MARS AND MERCURY IN CAPRICORNUS

There will be a unique massing of the planets Jupiter, Mercury, Mars and the waning crescent moon in Capricornus on the morning of February 22, 2009.  Below is a chart of the event as seen 30 minutes before sunrise from the eastern United States. 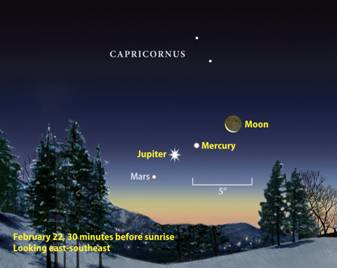 Jupiter (Zedek) is seen here with Mars (Adom), possibly representing the archangel Michael, and Mercury (Catab) representing the archangel Gabriel on His flanks.  If you can get a clear view of the east-southeast horizon, this will be worth getting up early to see.  Mars may be difficult to see through the twilight of the rising sun, but you should have no difficulties viewing it with binoculars or a telescope.

I forgot to mention that the Jupiter/Mars conjunction on February 17 will also be seen above the east-southeast horizon and will also be visible about 30 minutes or so before sunrise.

The planets Jupiter and Mercury (Catab) will come into conjunction in the constellation Capricornus in the predawn sky on February 23, 2009.  Mercury (Catab) represents the messenger or announcing angel Gabriel.

Chart 487 shows the ecliptic view of the constellation and the positions of the planets in Capricornus at the time of their conjunction on February 23.  This will also be seen above the east-southeast horizon around 30 minutes before sunrise. 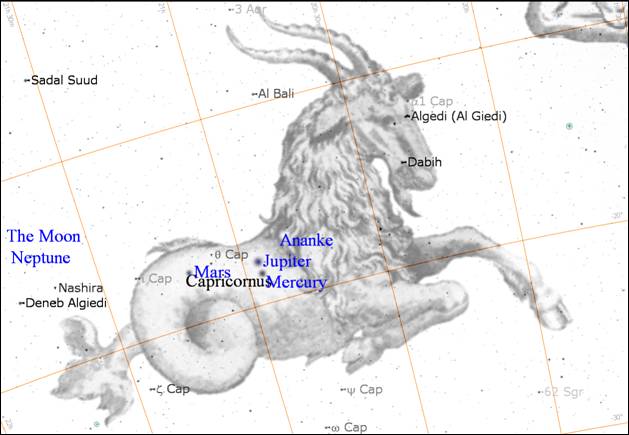 A new comet, Lulin, was first discovered in July 2007.  It will reach its closest approach to the earth on February 24, 2009. The comet is predicted to reach a magnitude 5 in brightness.  This should be a good binocular object to view and may even be viewable to the unaided eye in a dark, moonless sky.  Of course, as with all comets, there is always the possibility that it could have an outburst and brighten suddenly.  Remember Comet Holmes from October 2007 when it all of a sudden increased a million-fold in brightness overnight.  If a 5th or 6th magnitude comet all off a sudden increased in brightness a million-fold, it would be almost as bright as the full moon and would be easily seen in the daytime sky.  But such outbursts are extremely rare.  Comet Lulin may not even reach magnitude 5.  It could be a dud as we have also seen in times past.

It takes Comet Lulin around 28.5 million years to make one orbit around the sun.  So this is its first trip to this part of our solar system since before the creation of Adam.  When it reaches its peak brightness on February 24, it will be about 38.26 million miles from Earth, and 129.71 million miles from the sun.

The interesting thing about this comet is that it continually travels through the ecliptic and Twelve Signs of the Zodiac as seen from earth which is also the path of the sun, except this comet moves backwards along the ecliptic.  The ecliptic is actually the earth’s path around the sun as well as the other planets, which all move on the same direction.   However, this object is moving in the opposite direction.  This may suggest that the comet is from another solar system and that it was ejected into our solar system.  In any case, this is an interesting comet even though it may not be bright. 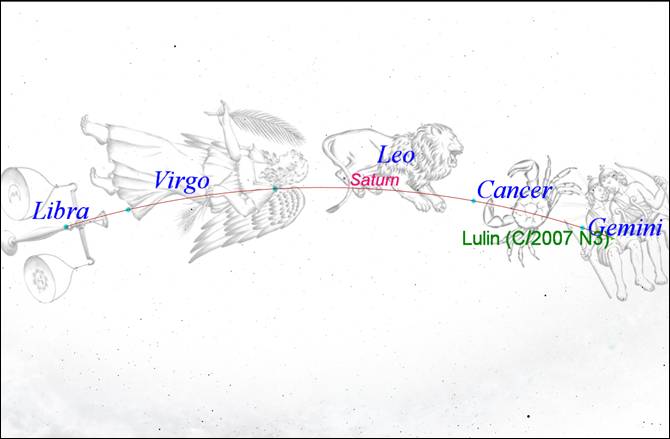 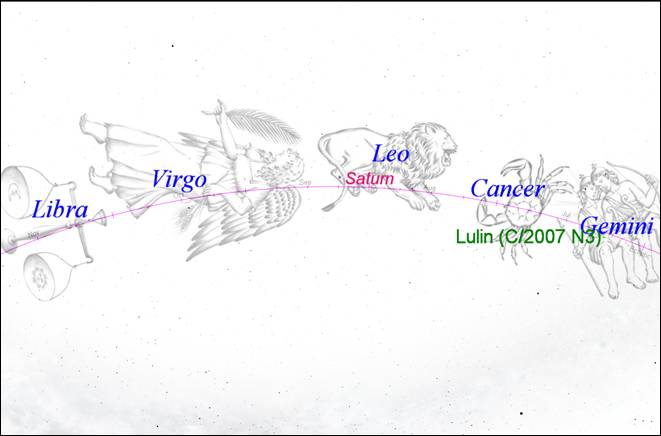 The comet is seen from the earth continually going around the Ecliptic backwards.  I ran my StarryNight Pro program up to the year 99,999, which is its limits, and the comet continually traveled along the ecliptic as seen from the earth.  I have never seen another comet that has done this before.  For all of those looking for the false sign of the maitreya, we will see what happens.

Comet Lulin will be in conjunction with the planet Saturn (represents Satan) in the constellation Leo (Arieh) when the comet is near or at its peak brightness on February 23, 2009.

Chart 490 shows the positions of Saturn and Comet Lulin in the Lion of Judah at the time of the conjunction.  They are seen here rising in the east in the early evening sky.  They will be visible throughout the night of February 23/24 to the predawn sky.  So get out your binoculars and telescopes.  The comet should appear as a small fuzz ball in binoculars.  It is not expected to have much of a tail. 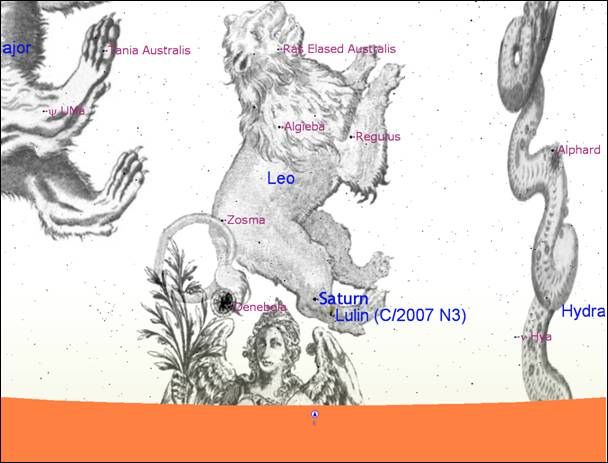 MARS AND MERCURY IN CONJUNCITON

The planets Mars and Mercury will come into conjunction in the constellation Capricornus on March 1, 2009.

Chart 491 shows the positions of the planets in Capricornus as seen above the east-southeast horizon from Jerusalem at 5:30 a.m. on March 1. 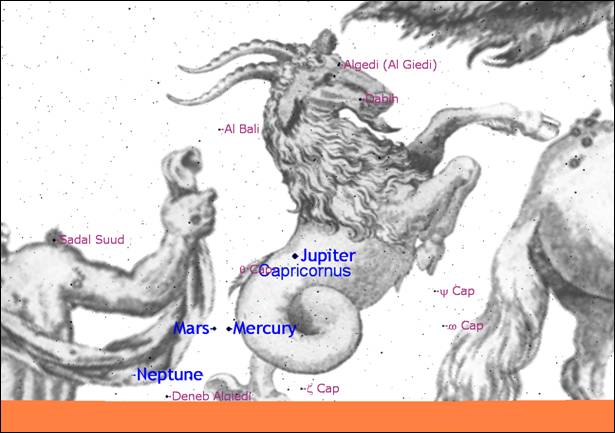 This is the last of many events in the Sign Capricornus over the past three or so months.  There will be no foreseeable events of interest in Capricornus for the rest of the year, and perhaps for years to come.

The planet Saturn (Satan) will reach opposition and its closest approach to the earth on March 8, 2009.  Saturn will also be seen at its brightest for the year at that time at a magnitude of approximately 0.5.

The chart below shows the position of Saturn in the constellation Leo at the time of opposition on March 8. 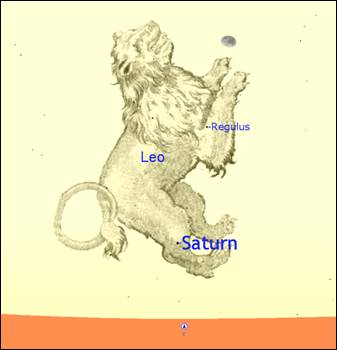 The dark object above the Lion’s feet is the moon.  Looks like a Lion playing with a ball.  The Lion of Judah is seen here rising in the east in the early evening sky.  This is as seen from Jerusalem at 6:30 pm Jerusalem Local Time.

Other News – We now have a link to the 468- page working manuscript that I mentioned in the January newsletter.  This is in PDF format.  The link to this manuscript is:

You may or may not agree with the theology of the Research Team of The Way International from 25 years ago, but the facts are correct and 2+2 still equals 4.  This is the best work that I have seen on the 70 weeks ministry of Jesus Christ and the Harmony of the Gospels.  I gave a copy of this to a colleague in 1997 and he has developed his work on the 70 weeks ministry of Yahshua and his version of The Harmony of the Gospels out of it.  This is the original.  The two works in it were never published in book form.  There are a few typos and other errors in it, but you should enjoy the study.  There are also numerous maps and charts in the manuscript.  Enjoy!!!!!

YHVH bless you with great abundance!