Nehemia Gordon from Jerusalem, Israel compiled the following New Moon Reports for the months of April and May and the beginnings of the Second and Third Biblical Months respectively.

April – “On Sunday April 26, 2009 the new moon was sighted from Israel.  The new moon was first sighted at 19:03 from Poriya Ilit by Valerie Knowles; at 19:10 from Jerusalem by David Cachicas and shortly thereafter by Nehemia Gordon, Devorah Gordon, and Adam Kinghorn; at 19:15 from Ashdod by Magdi Shamuel.”

May – “On Monday May 25, 2009 the new moon was sighted from Israel. The moon was first sighted from Jerusalem by David Cachicas at 19:46 and shortly thereafter by Nehemia Gordon, Devorah Gordon, Yehoshua Newman, Joelle Crawshaw, Eli Crawshaw, Rick Busenbark, Aviva Azkerman, Sam Crawshaw and Adam Kinghorn.  The moon was also sighted from Poriyya Ilit by Valerie Knowls at 19:55.”

This coming Sunday (May 31) is the biblical festival of Shavuot, the 50th day from the morrow after the Sabbath during the Feast of Unleavened Bread. For more information on Shavuot see http://www.karaite-korner.org/shavuot.shtml

I did not plan on doing a double-month newsletter for this issue, but because of illness, a bursting water heater, a flooded office space and living room, replacement of a carpet, and physical exhaustion, things did not work out as planned.  Fortunately, there were no celestial events of great significance for the month of May.  Thank you for your patience and understanding.

The following event is just for the record since it occurred about a month ago.  On May 2, 2009 the planet Nogah (Venus – the Bright and Morning Star) reached its brightest magnitude for this particular morning apparition of –4.7.   The definition of apparition is: The period of time during which a particular planet, star, etc., can be observed.

When Nogah was at its brightest, it was in the constellation Pisces, which represents the nation of Israel.  The chart below shows the position of Venus in Pisces at that time. 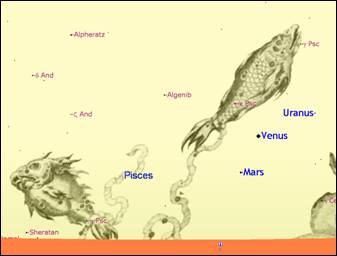 Venus did a retrograde loop in Pisces, which started in late January 2009 and ended in mid-May 2009.  A retrograde loop is when a planet appears to move forward, then backward, and then forward again in a loop as seen from the earth.  The chart below shows the retrograde loop of Venus through Pisces from January 26 to May 22, 2009. 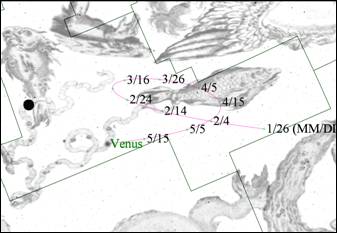 In an eight-year period, Venus does five retrograde loops in five different constellations and returns to nearly the same position in the first constellation 8 years later to the day.

Nogah (Venus) will pass 2o south of Adom (Mars) on June 19, 2009.  This is the second conjunction of Nogah and Adom this year.  The last one was on April 18 when Nogah passed 6o south of Adom.  Because of its retrograde motion, Nogah passes Adom twice this year.  The conjunction coming up on June 19 will occur in the constellation Aries. The last conjunction of the two planets in April occurred in Pisces.  Adom can represent blood and war, or the warrior angel Michael, or the atoning blood of Messiah depending on the circumstance.  Nogah represents Messiah, the Bright and Morning Star.  Again, Pisces represents the nation of Israel who would do well to recognize and believe that Yahshua of Nazareth is their Messiah and to accept the atoning sacrifice of His own blood that He gave for them.  The Lamb who is found worthy to open the book and loose the seven seals for he was slain and has redeemed us to God by His blood is represented by the constellation Aries, the Ram (Rev. 5:1-14).

Chart 496 shows the positions of Venus and Mars in the constellation Pisces at the time of conjunction as see from Jerusalem in the early morning sky above the eastern horizon on June 19, 2009. 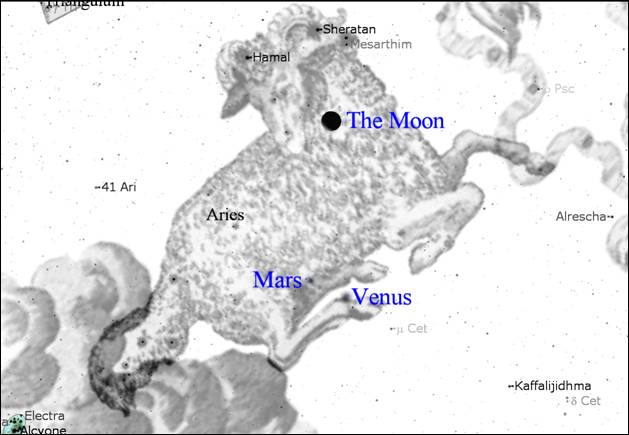 The chart below from Astronomy.com shows a neat simulation of this event.  There is also a bright waning crescent moon close to the planets at the time of conjunction.  The chart below shows the event as it will be seen from the eastern United States. 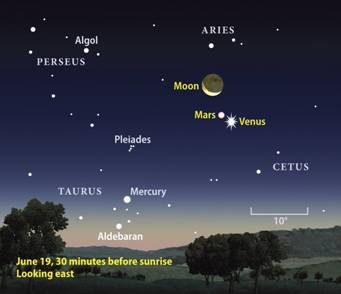 Every year around this time the earth passes through the debris shed by Comet 7P/Pons-Winnecke.  Unlike some meteor showers, which are consistent year after year, the June Boötids are unpredictable as far as its performance is concerned.

From 1928 to 1997 there was very little activity from this shower and it received very little attention.  However, in 1998, it produced more than 60 meteors per hour.  It produced another nice display in 2004.

This meteor shower should peak before dawn on June 27, 2009.  The radiant of this shower is just above the sickle in the constellation Boötes.         If the earth passes through the thick tail of comet debris, and it is unknown at this time if it will or not, then there should be a good show of meteors.

The best time to view would be between 2 a.m. and 4 a.m. local time.  The meteors will be seen coming from above the northwest horizon.  There may also be good viewing a night or two before and after June 27.

Chart 497 shows the radiant of the June Boötids just above the sickle that Boötes is holding in his hand.  The meteors may appear to be coming from other directions at times. 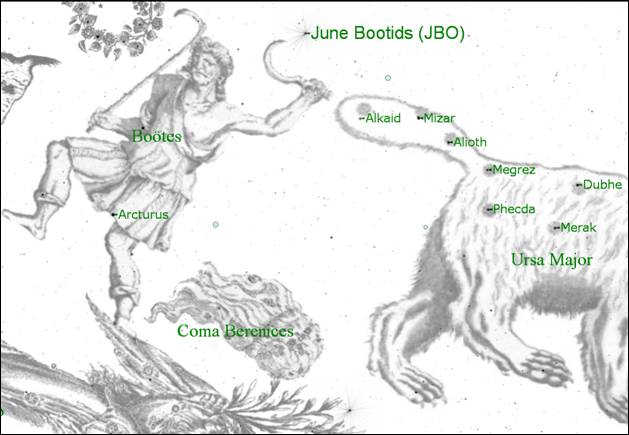 I labeled the seven stars in Ursa Major that make up the “Big Dipper” which is the easiest and most popular group of stars to spot in the heavens.  The radiant of the meteor shower is above left of the star Alkaid at the end of the handle of the dipper.  This should be easy for you to spot in the sky.

The name Boötes means He Cometh, and represents Messiah Y’shua (Christ Jesus) and is the portrayal of Revelation 14:14-16 – “And I looked, and behold, a white cloud, and upon the cloud One sat like unto the Son of Man, having on His head a golden crown, and in His hand a sharp sickle.  And another angel came out of the Temple, crying with a loud voice to Him That sat on the cloud, ‘Thrust in Thy sickle, and reap: for the time is come for Thee to reap; for the harvest of the earth is ripe.’  And He That sat on the cloud thrust in His sickle on the earth; and the earth was reaped.”

So here we have sparks flying from the sickle.  Perhaps it is getting sharpened for the Great Harvest.  See the February 2006 issue of Biblical Astronomy for more info on Boötes. Below is Michele Abraham’s painting of the constellation.

Subscriptions – I should be fully recuperated in the next couple of weeks and look forward to serving you in the upcoming year.  This is the last newsletter for the July 2008 to June 2009 subscription year.  You will need to re-subscribe in order to receive the July 2009 to June 2010 newsletters.  The subscription rates for the postal version of the newsletter are $25.00 domestic, $30.00 Canada, and $35.00 for overseas.  The yearly subscription for the online version is $12.00.  You can subscribe at any time.  I will be sending out the new passwords on July 1st and after.

Steve Santini sent the following poem to me in February.  It is a little dated, but still rings well.

to care less about the rest

And have deceived the fearful to bear the burden

of their own destruction.

Broken meteorological, astrophysical, and geophysical records continue scaling upwards and their anomalies abound from heaven and in the earth

The signs of the times whisper chords of a mystery

One of a kind, Comet Lulin, sails backward skirting

as the price deficient in the balance of eternal justice , the shock of wheat in the virgin’s hand, the promised rest

of paradise restored and the rhythm of the regal heartbeat.

Jupiter and Mercury swirl again together as they meet and pass

with Mars through Capricorn

among its brightest stars named the Lord as judge cometh, the goat

(of corrupted flesh) slain, the record of the cutting off, and the sacrifice of atonement slain.

And the spiritual new-year isn’t far away

Hungry hearts of faith stand at the veil waiting

The final corns of wheat being prepared for planting 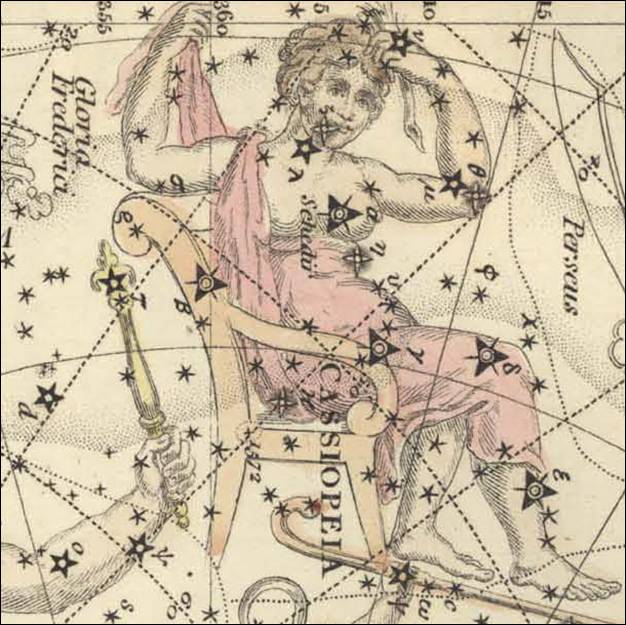 The captive delivered and preparing for her Husband the Redeemer

Cassiopeia is a decan constellation of the Sign Aries.

Ancient names for this constellation

Cassiopeia (Heb.) – the enthroned, the beautiful.

Ruchba (Arab.) – the enthroned, or seated.

Complimenting scriptures to this constellation picture

Isaiah 54:5-8 (R.V.) – “Thy Maker is thine husband; The LORD of Hosts is His name; And the Holy One of Israel is thy Redeemer; The God of the whole earth shall He be called.  For the LORD hath called thee as a woman forsaken and grieved in spirit, Even a wife of youth when she is cast off, saith thy God.

For a small moment have I forsaken thee; But with great mercies will I gather thee.  In overflowing wrath I hid my face from thee for a moment; But with everlasting kindness will I have mercy on thee, saith the LORD thy Redeemer.

Isaiah 61:10-11 (R.V.) – "I will greatly rejoice in the LORD, My soul shall be joyful in my God; For He hath clothed me with the garments of salvation, He hath covered me with the robe of righteousness, As a bridegroom decketh himself with ornaments, And as a bride adorneth herself with her jewels.  For as the earth bringeth forth her bud, And as the garden causeth the things that are sown in it to spring forth; So the Lord GOD [Adonai Jehovah] will cause righteousness and praise to spring forth before all the nations."

Revelation 19:7-9 (NKJV) – “7Let us be glad and rejoice and give Him glory, for the marriage of the Lamb has come, and His wife has made herself ready”.  8And to her it was granted to be arrayed in fine linen, clean and bright, for the fine linen is the righteous acts of the saints.  9Then He said to me, “Write: Blessed are those who are called to the marriage supper of the Lamb!”  And he said to me, “These are the true sayings of God.”

Stars in Cassiopeia and the meanings of their names

Caph (Heb.) – the branch (it is evidently given on account of the branch of victory which she bears in her hand)

It is obvious that Cassiopeia represents the bride of Messiah.  She is seen in the heavens seated at the side of the King.  She was seen as the bound and also as the captive daughter of Zion (Isaiah 51:21-52:3) in the constellation Andromeda, but here she is seen freed and delivered by her Redeemer.  She is also seen here adorning her hair and making herself ready for her Husband the Redeemer, and is arrayed if fine linen.  I do not know why the artist of this picture chose the color for the linen she is arrayed in.  I would have chosen white.  It is in Revelation 19:7-9 (see above) that the bride has made herself ready and it is granted that she should be arrayed in fine linen, clean and bright (KJV has “clean and white,” however the texts according to E.W. Bullinger’s The Companion Bible have “bright and pure” – we will find out which is correct in the not too far future).

From E.W. Bullinger’s The Witness of the Stars pp.108 & 112 – “She is indeed highly exalted, and making herself ready. Her hands, no longer bound, are engaged in this happy work. With her right hand she is arranging her robes, while with her left she is adorning her hair. She is seated upon the Arctic circle, and close by the side of Cepheus, the King.

This, then, is the truth set forth by this enthroned woman. The blessing founded on Atonement, and the Redemption wrought by the Lamb that was slain, result in a glorious answer to Israel's prayer, "Turn our captivity, O LORD" (Psa 126:4): when they that have "sown in tears shall reap in joy," and the LORD shall loosen her bonds, and place her enthroned by His side.”

That day draws nigh!!!