Nehemia Gordon from Jerusalem, Israel compiled the following New Moon Reports for the months of August and September 2009 and the beginnings of the Sixth and Seventh Biblical Months respectively.

August – “On Friday observers looked for the moon from Jerusalem but did not sight it. Visibility was uncertain this evening. Further sighting reports will be posted as they arrive. Barring a positive sighting for Friday evening, new moon will be Saturday night.”

“On Saturday the new moon was sighted from Jerusalem by Devorah Gordon at 7:02, by Johan Schutte at 7:10, and by Dina Marcus at . We are still waiting to hear from some observers whether or not they sighted it from Israel on Friday night.”

“With all of the expected observers reporting in we can now confirm that the moon was not sighted on Friday night from Israel and thus Saturday night was new moon day.”

September – “On Sunday the new moon was sighted by observers across Israel.  The moon was sighted from Kefar Tavor by Chad and Barbara Peterson and by Dan and Yvonne Olivier at 18:42; from Beersheva by Yaron Laluz at 1851; from Ramle by Avi Yefet and Mordechai Chayina at 19:00; from Tekoa by Bruce Brill and Paul Thompson at 19:01.

On the previous evening (Saturday ) visibility was impossible from Israel.  Yom Teruah Sameach!”

There were no celestial events of any great significance in September.

CATAB AT ITS GREATEST ELONGATION 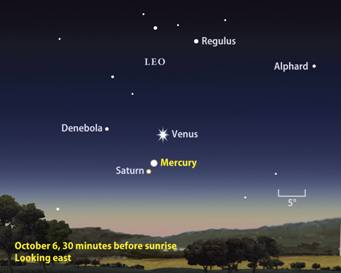 Catab will be in the constellation Bethulah (Virgo), just above her shoulder, when it reaches its greatest elongation on October 5, and in the planetary lineup on October 6.

On the morning of October 8 (Fourth day of Tabernacles), Mercury (Catab) will pass 0.30 south of Saturn for a very close conjunction.  The planets will be just above or in the upper shoulder of Bethulah at that time.  Venus (Nogah) will be nearby in the constellation Leo (Arieh). 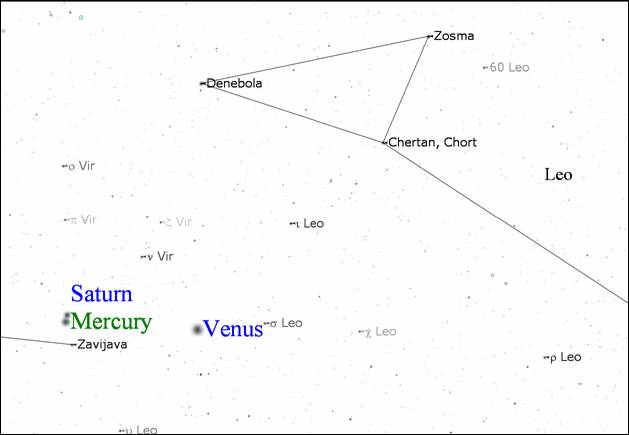 Mercury represents Gabriel the messenger angel.  Saturn represents Satan, and Bethulah represents the Twelve faithful Tribes of Israel and the woman of Genesis 3:15 and Revelation 12.

On the morning of October 13 (approx. 11 hours after the end of the Last Great Day or Shemini Atzeret), Venus (the Bright and Morning Star) will pass 0.60 south of Saturn for another close conjunction.

Chart 506 shows the positions of the planets in Bethulah’s upper shoulder area at the time of the conjunction.  The planet Catab (Mercury) is nearby in the same constellation. 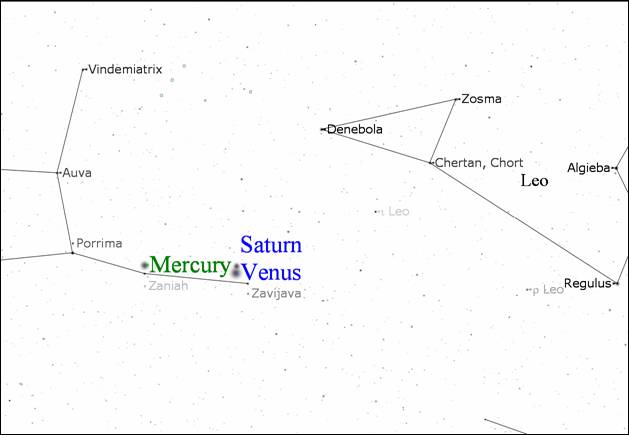 All we can do is to keep our eyes open and see if anything comes up on this planet during this year’s Fall Feasts, and praise Yahweh and be thankful for the life He has given us not matter what happens.

Since the planets Venus and Mercury are always not far from the sun and the sun is in Virgo during the Fall Feasts for most years (though it is sometimes in Leo when the Feast dates are early), the two planets will be in Virgo or very close by at the time of the Feast at some point and time during the first 22 days of Tishri.  The same holds true with the Spring Feasts of Passover and Unleavened Bread when the sun is in or very near Pisces.

The chart below shows the radiant of the Orionid meteor shower to be near or in the club of Orion. 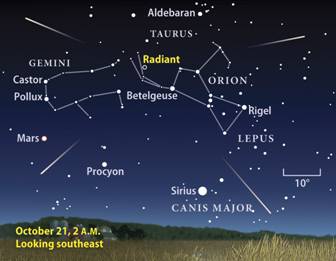 The main theme of the constellation Orion is Light breaking forth in the Redeemer.  Orion is pictured stomping down on the head of a hare (see picture below).  In ancient planespheres it is not a hare or rabbit that Orion is stomping down on with his foot, but a serpent.  This is out of the prophecy of Genesis 3:15 that the seed of the woman would crush the serpent’s head. 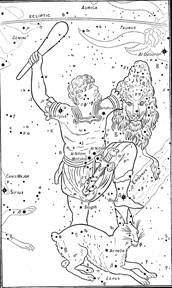 The following article on this year’s Orionid meteor shower is from the October 2009 issue of Astronomy and Astronomy.com.  It is a great magazine to keep updated with what is going on in the heavens from a secular point of view and along with a subscription to their monthly magazine you can have full access to their website at www.astronomy.com.

“Autumn meteor viewing gets rolling with the Orionid shower. Astronomers predict the Orionids will generate up to 30 meteors per hour at their peak before dawn October 21. This so-called zenithal hourly rate measures the number of meteors observers could expect to see under a dark sky if the radiant were overhead.

Activity could come close to this level. The shower's radiant lies in northeastern Orion, so it climbs high before dawn's first light. And this year, the Moon is only 3 days old and sets well before the prime observing hours after midnight.

The Orionids derive from tiny dust particles ejected by Comet 1P/Halley during its innumerable orbits of the Sun. These bits of flotsam hit our atmosphere at 41 miles per second, a speed second only to November's Leonid meteors.”

Another great source for current celestial events is the Sky & Telescope magazine.  They also have a website at www.skyandtelescope.com

The following article is from the November 2009 issue of Sky & Telescope.  It concerns a spot that appeared on Venus (the Bright and Morning Star) on that was in the same area and almost identical to the spot on Jupiter that occurred when an object struck it on .  See the August 2009 issue of Biblical Astronomy.  Both spots appeared on July 19.  This is getting really uncanny.  Venus was in the constellation Pisces (the nation of Israel) when the spot appeared.   Here is the article Venus Gets a Spot written by J. Kelly Beatty.

“Call it “kosmic karma” or just coincidence, but another planet developed a spot on July 19th.  That morning veteran planetary observer Frank Melillo noticed an odd bright spot on Venus in images taken from his backyard in Holtsville, New York.  Melillo used a Meade 10-inch LX200 Schmidt-Cassegrain telescope and a Starlight Xpress MXS CCD camera equipped with an ultraviolet filter, which enhances cloud features in the planet’s dense atmosphere.  He first noticed the brightening, located near 500 south in latitude, at about 13:00 Universal Time.  “I have seen bright spots before,” Melillo announced via email, “but this one is an exceptionally bright and quite intense area.”

The European Space Agency’s Venus Express spacecraft quickly confirmed that the spot was real.  Images from the orbiter’s Venus Monitoring Camera show a spot about 600 miles (1,000 km) across.  In an image taken one atmospheric rotation (4 days) earlier, the spot is evident but more subdued.

So what caused it?  scientists say several explanations are plausible: a towering plum erupting from a volcano, an interaction with the solar wind, an icy comet impact, or simply changes within the cloud deck itself.”  For details, click on the URL:  www.venus.wisc.edu/news_features.html

You will need to get the magazine to see the picture of Venus with the spot.  It was not on the Sky & Telescope website and it would not scan well to include it here.  The November 2009 issue of Sky and Telescope should be out and in the magazine racks of stores that carry magazines.

There is another good reason to consider in purchasing this issue.  There is a great article in it concerning  the 2012 hype going around.  The cover title of the article written by E. C. Krupp is The 2012 Doomsday Scare? What you need to know to set people straight.  The actual article is titled The Great 2012 Scare. This article is very informative and I wholly agree with it.

There is another good article immediately following the 2012 article in the November 2009 issue of Sky and Telescope titled Real Potential Disasters by Robert Naeye.

Yahweh bless you and keep you. 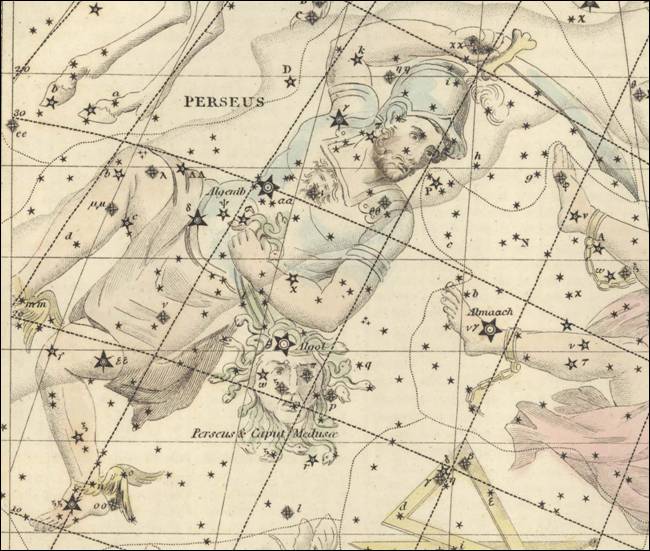 "The Breaker" delivering the redeemed

Perseus is a decan constellation to the Sign Aries.

Kar Knem (Denderah) – he who fights and subdues.

Michah 2:12-13 (KJV) – “I will surely assemble, O Jacob, all of thee; I will surely gather the remnant of Israel; I will put them together as the sheep of Bozrah, as the flock in the midst of their fold: they shall make great noise by reason of the multitude of men.  The breaker (parats) is come up before them: they have broken up, and have passed through the gate, and are gone out by it: and their king shall pass before them, and the LORD on the head of them.”

Revelation 19:11-21 – “And I saw heaven opened and behold a white horse: and he that sat upon him was called Faithful and True and in righteousness he doth judge and make war.  His eyes were as a flame of fire, and on His head were many crowns; and He had a name written, that no man knew, but He Himself. And he was clothed in a vesture dipped in blood; and His name is called The Word of God.  And the armies which were in heaven followed him upon white horses, clothed in fine linen, white and clean.  And out of His mouth goeth a sharp sword, that with it He should smite the nations: and He shall rule them with a rod of iron: and He treadeth the winepress of the fierceness and wrath of Almighty God.  And He hath on His vesture and on His thigh a name written, KING OF KINGS, LORD OF LORDS.  And I saw an angel standing in the sun; and he cried with a loud voice, saying to all the fowls that fly in the midst of heaven, “Come and gather yourselves together unto the supper of the great GOD.  That ye may eat the flesh of kings, and the flesh of captains, and the flesh of mighty men, and the flesh of horses, and of them that sit on them, and the flesh of all men both free and bond, both small and great.”  And I saw the beast, and the kings of the earth, and their armies, gathered together to make war against him that sat on the horse, and against his army.  And the beast was taken, and with him the false prophet that wrought miracles before him, with which he deceived them that had received the mark of the beast, and them that worshipped his image.  These both were cast alive into the lake of fire burning with brimstone.  And the remnant were slain with the sword of Him that sat upon the horse, which sword proceeded out of his mouth: and all the fowls were filled with their flesh.”  (Compare these scriptures with I Samuel 17 when David went up against another beast who came against Israel with his Philistine armies).

Stars in Perseus and the meanings of their names

The head that Peretz is holding in his left hand is called Rosh Satan in the Hebrew, which means the head of the enemy or the head of Satan.  It is also called Al Ghoul (Arab.), which means the evil spirit.  The main or brightest star in this head is Al Gol (Arab.) or Algol, which means rolling around.  The following is from E.W. Bullinger’s The Witness of the Stars, pp. 16, 17.

“It is a most remarkable phenomenon that so many of these enemies should be characterized by variable stars! But this head of Medusa, like the neck of Cetus, has one. Al Gol is continually changing. In about 69 hours it changes from the 4th magnitude to the 2nd. During four hours of this period it gradually diminishes in brightness, which it recovers in the succeeding four hours; and in the remaining part of the time invariably preserves its greatest lustre. After the expiration of this time its brightness begins to decrease again. Fit emblem of our great enemy, who, "like a roaring lion, goeth about seeking whom he may devour" (1 Peter 5:8); then changing into a subtle serpent (Gen 3:8); then changing again into "an angel of light" (2 Cor 11:14). "Transforming himself" continually, to devour, deceive, and destroy”