Nehemia Gordon from Jerusalem, Israel compiled the following New Moon Report for the Eleventh Biblical Month on January 27, 2008.  This new moon occurred in the constellation Capricornus.

The next New Moon is expected to be visible from Jerusalem on February 26, 2009 when it will be 2% illuminated and 16 degrees above the horizon at 5 minutes past sunset.  At that time, the sun will be in Aquarius and the moon will be in Pisces.

There will be an annular eclipse of the sun on January 26, 2009.  During an annular eclipse the moon does not completely cover the sun during the peak of the eclipse, but appears a bit smaller than the sun, allowing a ring from the bright light of the sun to be seen around the circular edge of the moon.

The eclipse will be visible from the Indian Ocean and islands of southeastern Asia.  It will not be visible in any part from the United States, Israel or Europe.

Chart 482 shows the position of the sun and moon in the constellation Capricornus (the goat of atonement slain for the redeemed) during the peak of the eclipse as seen from Jakarta. 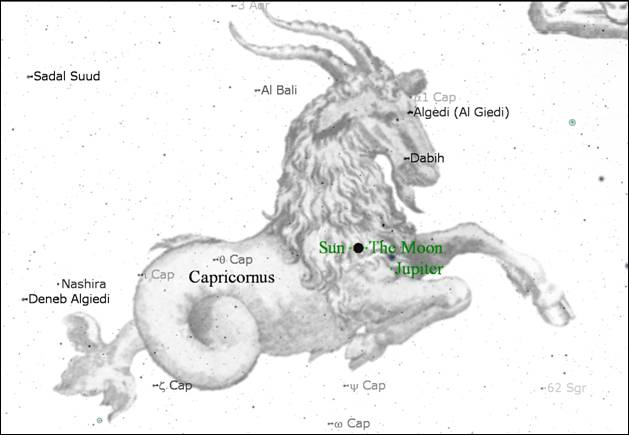 Chart 482 – Annular Solar Eclipse in Capricornus as seen from Jakarta on January 26, 2009

Chart 483 shows the position of the moon in the constellation Leo (Arieh) at the peak of the eclipse as seen from Jerusalem in the early evening sky as the moon is rising above the eastern horizon on February 9, 2009.  Most likely only very few will be able to tell by sight that there is an eclipse.  This would not be considered a big sign.

Chart 483 – Penumbral Lunar Eclipse as seen from Jerusalem on February 9, 2009

The eclipse will be most visible in eastern Europe, western North Africa, Asia, Australia, and Pacific Ocean.  It will be visible from Israel during moonrise and from the mid-western to western United States near or during moonset.

The peak of the eclipse will occur at 14:38:16.5 UT, which is 6:38 a.m. Pacific Standard Time..  The moon will start to go into eclipse around 4:40 a.m. PST.   If you are up you can take a hard look to see if you see the penumbral shadow. and give a report on it.  You are most welcome to send your reports to starguy1@comcast.net

If you happen to miss this penumbral eclipse, there will be another one on August 6, 2009 that will be visible from the eastern United States to the Midwest and also from Israel.

DATING OF THE CRUCIFIXION

Over the past six weeks I have received a number of inquiries via telephone and e-mails on a DVD and website produced by The STAR Project and researched and written by Rick Larson.  I have not watched the DVD but from the trailer on the following website, it appears to be a wonderful presentation.  http://bethlehemstar.net/

The above DVD, “The Star of Bethlehem”, is available at many Christian Bookstores for  around $10.00.

I agree with the author on the events surrounding the birth of Y’shua.  I could not find the date that he had for Messiah’s birth. I believe that His birth was on September 11, 3 B.C.  We most likely both got our ideas on the subject from the late Dr. Earnest L. Martin.  I first became aware of Dr. Martin’s research around 1980.  There is a free online version of Dr. Martin’s book The Star of Bethlehem: The Star that Astonished the World in the Links section on the Biblical Astronomy Website at www.biblicalastronomy.com Here also is the link to the website for Dr. Martin’s book. http://www.askelm.com/star/index.asp  Besides the free online book, there are a number of radio interviews that were done with Dr. Martin on the webpage and a video presentation on The Star of Bethlehem created by Griffith Observatory.   Dr. Martin’s first book on the subject was titled The Birth of Christ Recalculated , published in 1979.

The part of the Video by Rick Larson that I received many questions on concerned a partial lunar eclipse that occurred on April 3, 33.   In the video, the eclipse is viewed from the moon.  It shows the earth passing over the sun.  The sun at the time was over the heart of Aries, the Lamb (Aries just happens to be the feature constellation for this month’s newsletter.  We just finished Pisces in the December newsletter.  At the peak of the eclipse the sun was totally blackened and it is show on the video that it happened at 3:01 in the afternoon.  Many people who viewed the video believed that it was 3:01 Jerusalem Time, about the time the Lord’s life expired.  However, I ran the same astronomy program as used in the presentation, and found that it was 3:01 Universal Time, which is 5:01 Jerusalem Time.  I strongly disagree with the date April 3, 33 for the crucifixion for a host of reasons, which I do not have the space to go into here.  But, if that were the date, it could be stated that the sun became blackened over the heart of the Lamb as seen from the moon around the time that Messiah was placed in the heart of the earth.

Chart 484 shows the earth beginning to eclipse the sun at 3:00 pm Jerusalem on Friday April 3, 33 as viewed by those standing on the moon.  It is recorded in Matthew 27:45-50 that there was darkness all over the land from the sixth hour until the ninth hour and it was about the ninth hour that Jesus cried out the first time and soon after the second time just before he yielded up His spirit.  The sixth hour roughly corresponds to the modern time of 3:00 pm.  However, on April 3, 33 the sun reached transit, high noon, at 11:42 a.m., so technically, though not necessarily observed as, the end of the third hour would have been 2:42 p.m. as we now reckon time.  This shows the sun was far from being darkened as it was just starting to go into eclipse as seen from the moon at the time Messiah’s life expired. 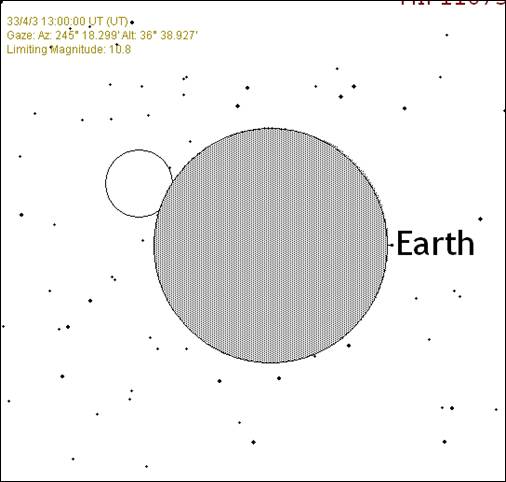 It is also stated on the website that there was a blood red eclipse of the moon seen from Jerusalem that evening.  A blood red lunar eclipse only occurs in a total eclipse.  This was a partial eclipse.  It could be seen as red from other causes such as having smoke or heavy particulates in the atmosphere as the moon is seen in its rising.  But this could make it appear blood red at any of the Passovers throughout time if indeed the moon appeared blood red on the evening following the Lord’s crucifixion.

Furthermore, when the moon started to rise above the eastern horizon as seen from Jerusalem that evening, the eclipse was all but finished.

Chart 485 shows the moon as seen from Jerusalem at 23 minutes past moonrise, when it most likely first became visible to observers in Jerusalem.  Only the upper left section of the moon has the umbra shadow on it, which completely disappeared moments later.  It would have been difficult to see this shadow to observers.  At that time the moon was also partially covered with the penumbral shadow of the moon.  Some of you can see how observable a partial penumbral shadow is on February 9, 2009 as mentioned earlier in this newsletter. 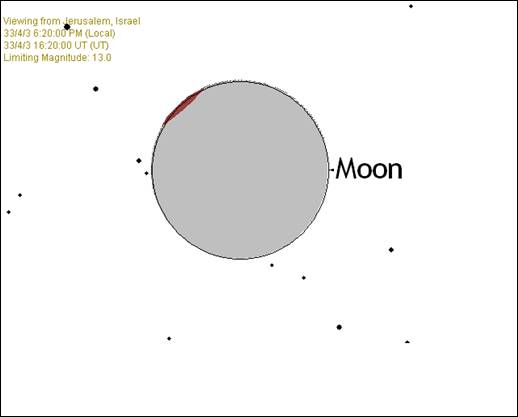 There is a 468 page working manuscript  (1984) that is the best work that I know of concerning the historical, Biblical and astronomical events showing the time of Y’shua’s crucifixion (a Wednesday not a Friday) and his 70-week ministry (not 3.5 years).  We hope to have that available for download in the next two to three months. 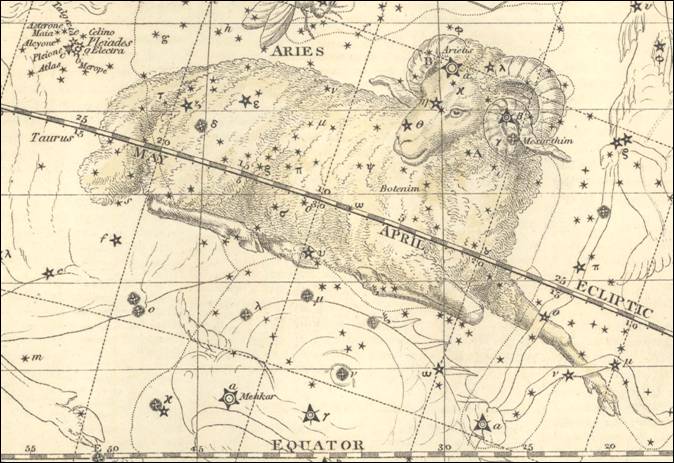 The blessings of the redeemed consummated and enjoyed

Aries is the main constellation of the Sign Aries.

Revelation 5:6-13 (NKJ) – 6And I looked, and behold, in the midst of the throne and of the four living creatures, and in the midst of the elders, stood a Lamb as though it had been slain, having seven horns and seven eyes, which are the seven Spirits of God sent out into all the earth.  7Then He came and took the scroll out of the right hand of him who sate on the throne.

8Now when He had taken the scroll, the four living creatures and the twenty-four elders fell down before the Lamb, each having a harp, and golden bowls full of incense, which are the prayers of the saints.  9And they sang a new song, saying: “You are worthy to take the scroll, And to open its seals; For You were slain, And have redeemed us to God by Your blood.  Out of every tribe and tongue and people and nation, 10And have made us kings and priests to our God; And we shall reign on the earth.”

11Then I looked, and I heard the voice of many angels around the throne, the living creatures, and the elders; and the number of them was ten thousand times then thousand, and thousands of thousands, 12saying with a loud voice: “Worthy is the Lamb who was slain To receive power and riches and wisdom, And strength and honor and glory and blessing!”

13And every creature which is in heaven and on the earth and under the earth and such as are in the sea, and all that are in them, I heard saying” “Blessing and honor and glory and power Be to Him who sits on the throne, And to the Lamb, forever and ever!”

Stars in Aries and the meanings of their names

Mesartim (Heb.) – the bound, or binding.

Shalisha (Heb.) – the triangle over the head of Aries, exalted, chief.

It is in the Sign Capricornus with its decan constellations that the crucifixion and resurrection of the Messiah is portrayed.  There, the Goat is seen as dying in sacrifice.  Here in Aries, the ram, or lamb, is full of vigor and life, not falling in death as Capricornus is.  The Lamb is living again, “as it had been slain” (E.W. Bullinger’s The Witness of the Stars, pp. 104, 105).  The theme here is victory and triumph.  We are taken back and reminded of the “blood of the Lamb,” which is the foundation on which that victory rests, namely, Atonement.

The portrayal of Aries and its Decan constellations are of Y’shua, Jesus Christ, returning with his saints in victory and destroying the armies of the adversary.  They are the pictures that go along with the events of Revelation 5:6-13 and Revelation 19:6 – 20:3.  In the main constellation Aries is portrayed the Lamb who was slain but is now alive and who is found worthy to open the seven seals, and also worthy “to receive power and riches and wisdom, and strength and honor and glory and blessing” (Rev. 19:6-20:3).  In Cassiopeia is portrayed the bride making herself ready (Rev. 19:7).  In Perseus is portrayed Messiah defeating the armies of the beast and Satan (Rev. 19:11-21).  In Cetus is portrayed the binding of “the dragon, that serpent of old, who is the Devil and Satan” (Rev. 20:1-3).

The Ram in the main constellation (picture above) is seen with its foreleg breaking the bands of bondage of Pisces (the nation of Israel) who are seen here bound to Cetus, the beast from the sea, but are being set free, never to be bound again.

Here is portrayed the Lamb of God, not dying in sacrifice, but returning as KING OF KINGS AND LORD OF LORDS.