Nehemia Gordon from Jerusalem, Israel compiled the following New Moon Report for the month of January 2010 and the beginning of the Eleventh Biblical Month.

“On Saturday January 16, 2010, the new moon was sighted from Jerusalem, Israel at 17:20 by Willie Ondricek, Nehemia Gordon, Devorah Gordon, and Tina Ondricek.”

The next new moon is expected to be visible from Jerusalem near sunset on February 15, 2010 when the moon will be 2% illuminated and 14.680 above the horizon at 5 minutes past sunset.

An annular solar eclipse took place on January 15, 2010.  The path of the annular eclipse ran through central Africa, and parts of India, Sri Lanka, Burma and China.  It was seen as a partial eclipse from eastern Europe, the Middle East, and much of Asia.

Below is a photo of the partial eclipse taken from Ma’al Adummim, a suburb of Jerusalem, Israel by Avital Pinnik and sent to me by Roy Hoffman.  The sun here is 24% covered at the peak of the eclipse as seen from the Jerusalem area. 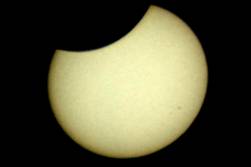 Chart 512 shows the positions of the sun and moon in the constellation Sagittarius at the peak of the eclipse as seen from Jerusalem.  The black dot below the sun is the moon and the fuzzy ball to the slight lower left is the planet Nogah (Venus) – the Bright and Morning Star. 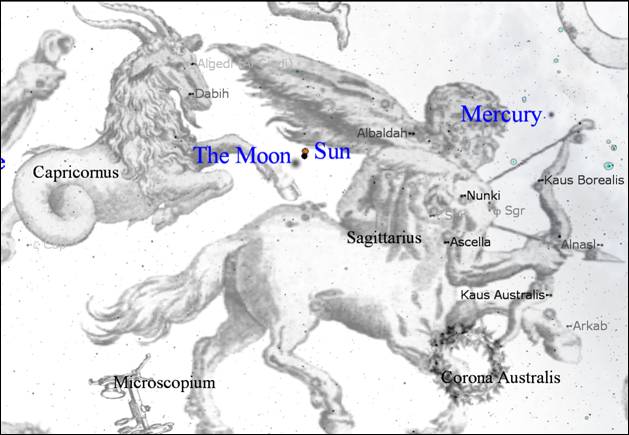 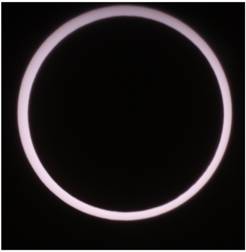 I do not know at this time what, if any, significance that this particular eclipse has.

The planet Adom (Mars) will reach opposition, the opposite side of the earth as the sun, on January 29, 2010 at which time it will be shinning at a bright magnitude of –1.3 and brighter than it has been in the last two years.  Mars will be shinning nearly as bright throughout early February.   Adom reached its closest approach to the earth during this particular two-year orbit on January 27th at a distance of 61.7 million miles. 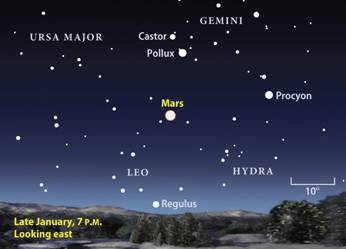 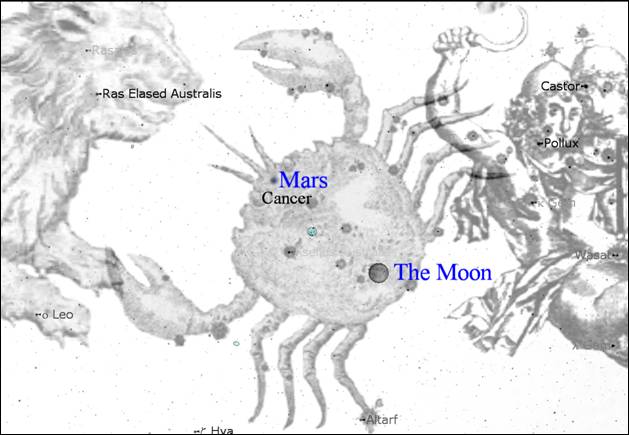 Chart 513 – The position of Mars in Cancer at the time of its opposition along with full moon.

Adom represents Michael the warrior angel, or blood and war, or blood of atonement, depending on the circumstance of other celestial events and earthly events of a given time.  The main theme of the Sign and constellation Cancer is Messiah’s redeemed possessions held fast.  It is also a place of safety and refuge for the flock of Messiah during a time or times of tribulation and distress.

During the time of the “Redeemer’s triumph (see the info on Sagittarius above in the Annular eclipse article) there will be great tribulation in the world.  If these two signs – the eclipse and opposition of Mars – are portraying these events are to soon come to pass, we should know in the near future.

At any rate, Adom will put on a great show in clear skies in early February.  Take a little stroll outside after supper and gaze east in the heavens.

ZEDEK AND NOGAH IN CONJUNCTION?

I think that it was in the November or December newsletter that I mentioned that there would not be any planetary conjunctions until next July or August.  I was wrong.  At the time I was going through a chart of events for 2010 that I received from Astronomy magazine.   They did not mention the Jupiter/Venus conjunction that is to take place on February 16.  They most likely did not mention it because it will be most difficult to see with the unaided eye.  The planets will be very close to the sun shortly after sunset and will pretty much be wiped out by the sun’s glare.  These are the two brightest planets/stars in the heavens so you should be able to spot them if you have good eyesight.

The conjunction of Zedek and Nogah will take place on the evening of February 16.  Below is an animation of the event at 20 minutes past sunset.  It will not look as bright as this in reality.

Chart 514 shows the positions of Jupiter and Venus in the Sign and constellation Aquarius at the time of conjunction as seen from Jerusalem, Israel at 20 minutes past sunset.  As seen from Jerusalem they will be in near conjunction at their closets approach.  The chart shows the event in ecliptic view.  The chart or simulation above shows the event from the eastern United States in local view.  There will be a bright crescent moon (2nd day of the Twelfth Biblical Month) seen above the planets at the time of conjunction.  To see a local view of Chart 514, tip the chart so the right side is at the bottom of the page and the moon at the top. 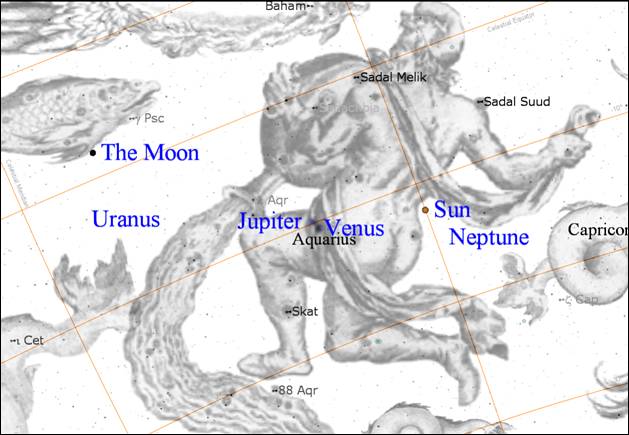 The crescent moon at this time will be in the Sign and constellation Pisces, which represents the nation of Israel.

The planet Zedek (Jupiter) represents THE LORD OUR RIGHTEOUSNESS and Nogah (Venus) represents the Bright and Morning star.  The main theme for the Sign and constellation Aquarius is Their blessings assured, or the living waters of blessing poured forth for the redeemed.  So, no matter what else is going on in or on the earth, Yahweh’s blessings are and will be poured forth on His people.

The chart below shows where and when to find the bright planets in February 2010.

You can now download pdf files with full articles including pictures and diagrams of the articles from Sky & Telescope from the following link:  www.SkyandTelescope.com/2012

Go to the bottom of the short article and click on where it says, “click here to download a 1-Mb pdf file” for one article and a 1.5-Mb pdf file for the other article.  You can read them from the screen or print them.

A prayer request – Please pray for my mother, Evelyn Adamo, who is 82 years old and very recently took a fall and broke her hip.  She says she is fine.  She is having a pin put in her hip on January 30, my birthday.  Thank you for your prayers.

Yahweh bless you richly and keep you. 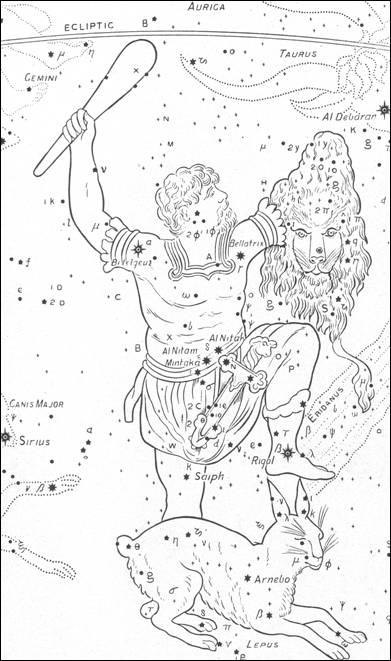 ORION (the Glorious One)

Light breaking forth in the Redeemer

Orion is a decan constellation to the Sign Taurus.

Hagat (Denduran) – this is he who triumphs.

Urana (Akkaidian) – the light of heaven.

Isaiah 60:1-3 – “Arise, for thy light is come, And the glory of the LORD is risen upon thee.  For, behold, the darkness shall cover the earth, And gross darkness the people; But the LORD shall arise upon thee, and His glory shall be seen upon thee.  And the Gentiles shall come to thy light, And kings to the brightness of thy rising.”

Isaiah 42:13,14 – “The LORD shall go forth as a mighty man, He shall stir up jealousy like a man of war; He shall cry, yea, roar; He shall prevail against His enemies.  I have [He says] long time holden my peace; I have been still, and refrained myself: Now will I cry like a travailing woman; I will destroy and devour at once.”

Stars in Orion and the meanings of their names

Rigel  or Rigol (Arab.) – the foot that crusheth.

This is a picture of Messiah coming in great light and crushing the head of his enemy.  The hare seen in the picture here was not the picture seen in ancient planespheres.  In ancient times this was a picture of a coiled serpent.  Messiah is seen here crushing the head of the serpent or dragon, not a rabbit.  The star names of Lepus will bear this out when I do Lepus as a feature constellation in the near future.  This goes along with the main theme of the Sign of Taurus, which is Messiah, the coming Judge of all the earth.  Here, Messiah is seen pouring forth his wrath on his enemy Satan, the Devil.  The river of wrath or fire, Eridanus, is seen flowing here from the place that His foot is coming down on the enemy’s head.   The following is from E.W. Bullinger’s The Witness of the Stars, pp. 125, 126 concerning this constellation.

“The constellation is mentioned by name, as being perfectly well known both by name and appearance, in the time of Job; and as being an object of familiar knowledge at that early period of the world's history. See Job 9:9; 38:31, and Amos 5:8 (Heb. Chesil, which means a strong one, a hero, or giant).

It contains 78 stars, two being of the 1st magnitude, four of the 2nd, four of the 3rd, sixteen of the 4th, etc.  A little way below  (in the sword) is a very remarkable nebulous star. A common telescope will show that it is a beautiful nebula. A powerful telescope reveals it as consisting of collections of nebulous stars, these again being surrounded by faint luminous points, which still more powerful telescopes would resolve into separate stars.

Thus beautifully is set forth the brilliancy and glory of that Light which shall break forth when the moment comes for it to be said, "Arise, shine, for thy light is come."

The picture presents us with "the Light of the world." His left foot is significantly placed upon the head of the enemy. He is girded with a glorious girdle, studded with three brilliant stars; and upon this girdle is hung a sharp sword. Its handle proves that this mighty Prince is come forth in a new character. He is again proved to be "the Lamb that was slain," for the hilt of this sword is in the form of the head and body of a lamb. In his right hand he lifts on high his mighty club; while in his left he holds forth the token of his victory--the head and skin of the "roaring lion." We ask in wonder, "Who is this?" and the names of the stars give us the answer.