Nehemia Gordon from Jerusalem, Israel compiled the following New Moon Report for the month of July 2010 and the beginning of the Fifth Biblical Month.

The next New Moon is expected to be visible from Jerusalem near sunset on when the moon will be 3.72% illuminated and 7.6o above the horizon at 5 minutes past sunset.

See Chart 531 further toward the bottom of this page for an awesome celestial event.  The moon is shown oversized here with Mercury above it and further above a triangular massing of Venus, Mars and Saturn in Bethulah (Virgo).   The chart shows the event as seen from Jerusalem at six minutes past sunset.  The colored area is the horizon. 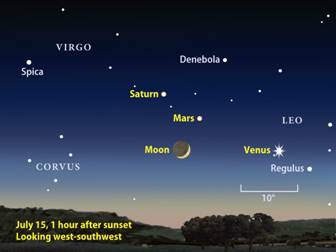 The simulation above shows the crescent moon on the evening of July15, near the beginning of the 3rd day of the Fifth Biblical Month at one hour past sunset.  On the evening of the first day of Ab on July 13, the thin crescent was below Nogah (Venus).  Here, is a unique line-up of the three bright planets to kick off the month of Ab where the crescent moon passed Venus (the bright and Morning Star) on July 14, Mars (Michael, the warrior Archangel) on July 15, and Saturn (Satan) on July 16.  Venus and Mars were in Leo (Arieh -  the Lion of Judah) and Saturn was in Virgo (Bethulah – the woman and the faithful ones of Israel who hold the testimony of Y’shua and the 144,000 of Revelation) when the crescent moon passed them. Bethulah is the woman who the dragon sends a flood against after Michael casts him to the earth.  This is where the woman flees to the wilderness for 1,260 days.

Is the war between Michael with his archangels against Satan with his angels about to begin?  We will know soon enough.

There will be a very close conjunction of the planet Catab (Mercury) and the star Regulus (the King of Judah and the Universe) in the constellation Leo (Arieh – the Lion of Judah) on the evening of .

Chart 528 shows the position of Mercury (Gabriel the announcing or messenger archangel) near the time of the conjunction as seen from Jerusalem at Jerusalem .  Mercury will pass 0.30 or three tenths of one degree from Regulus at its closest approach.  This will be a neat sight to see that evening from Israel and also from the United States and other parts of the world.  The colored area on the chart is the horizon.  I used the line drawings instead of the pictures for clarity. 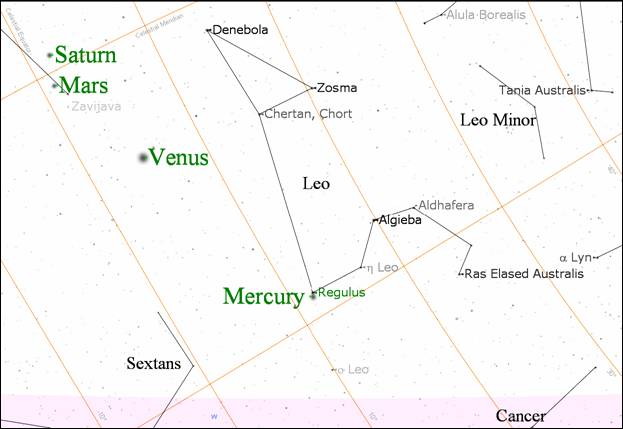 Chart 528 – Mercury in very close conjunction with Regulus as seen over the western horizon from Jerusalem at 8:15 p.m. local time on 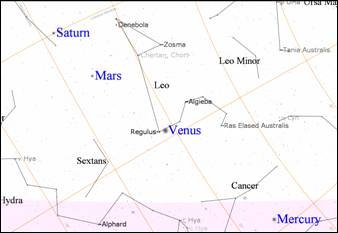 The four planets are putting on a beautiful dance in July and August as we shall further see as we go on.

Mars will pass 20 below Saturn on .  Chart 529 shows the positions of the planets in the shoulder of Bethulah (Virgo) at the time of conjunction as seen from Jerusalem.  Again, I used the line drawings for the constellations instead of the pictures to show the planets more clearly.  In certain displays the dots representing the planets get lost in the drawings and are hard to make out. 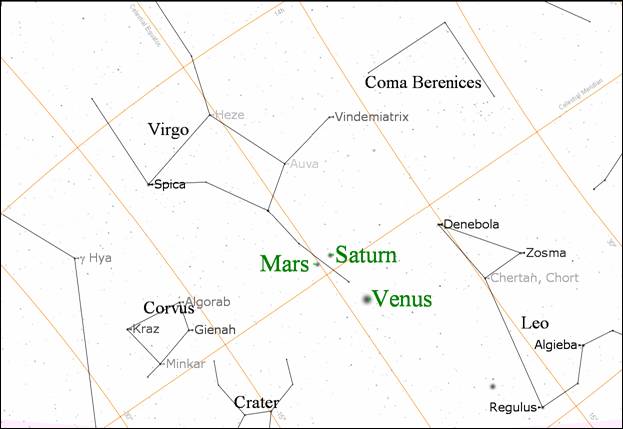 Chart 529 – Mars and Saturn in conjunction in the shoulder of Bethulah as seen above the western horizon from Jerusalem at 8:30 p.m. local time on .

Chart 529 also shows a unique massing of Venus, Mars and Saturn.  Below is a simulation of the event as seen from the eastern United States on the evening of July 31. 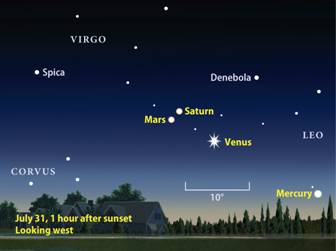 Venus will pass 30 below Saturn on .  Chart 530 shows the positions of the two planets in the shoulder of Bethulah (Virgo) at the time of the conjunction at 8:30 p.m. local time as seen from Jerusalem.  Here, the Bright and Morning Star, Y’shua, is battling it out with Satan.  The ole devil doesn’t stand a chance.  Below and to the left on the chart, the constellation Corvus is the raven standing on the back of Hydra, the water serpent, tearing and eating the serpent’s flesh.

Chart 530 – Venus and Saturn in conjunction in the shoulder of Bethulah as seen above the western horizon from Jerusalem at 8:30 p.m. local time on .

A main star in Corvus, not named on this chart, is Al Goreb.  It is riding on the back of the serpent.  Hmmmmm, that name sounds familiar.  Al Goreb (Arab.) is from the Hebrew Oreb, which means, the Raven.  See E.W. Bullinger’s The Witness of the Stars, p. 169.

Below is a picture of Corvus.  Here the name Al Goreb is shown as Al Gorab.  It is the second brightest star in Corvus or the Beta star.  The Beta star in the Raven’s foot most likely belongs to Hydra.  You can also see the three bright stars of Corvus in the simulation two charts above. 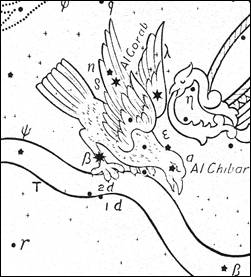 There will be a triangular massing of the planets Venus, Mars, and Saturn in the shoulder of Bethulah on .  As written earlier, this massing will occur above the first crescent of the new moon at the beginning of the Sixth Biblical Month.  See Chart 31 below. 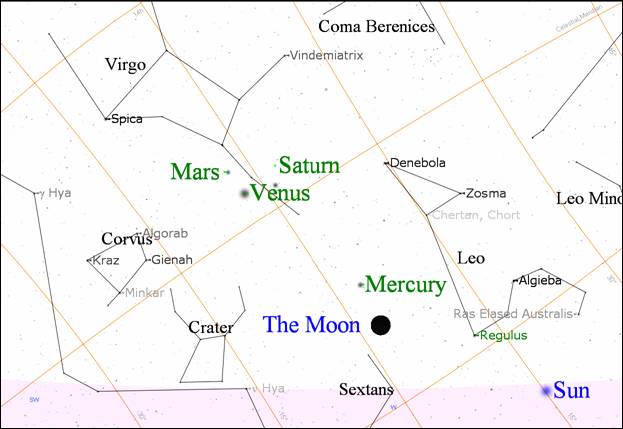 Chart 531 – Triangular massing of Venus, Mars and Saturn in Bethulah above the new moon as seen setting over the western horizon from Jerusalem at 7:30 p.m. local time on .

After months of no planetary conjunctions, we are now getting a flood of them.  Payday has arrived. The harvest is plentiful. The nets are full.  There is another planetary conjunction later in August, but I am saving that one for the August newsletter.  I need something to write about for that issue.  I hope to have it published soon after August 11, the date for the next new moon.

While Venus, Mars, Mercury and Saturn were and are dancing though the Lion and the Woman in July and August, Jupiter was and is doing a solo dance in its retrograde motion (moving back and forth) in the constellation Pisces.  Pisces represents the nation of Israel or the seed of Jacob, specifically Jacob or Israel in bondage to the beast from the sea, such as in the time of Jacob’s Trouble.

The two fish of Pisces are shown in the heavens bound to Cetus, the sea monster or the beast from the sea.  It is Messiah, represented by the constellation Aries, who breaks the bands that attach the fish to the beast.  See E. W. Bullinger’s The Witness of the Stars, pp. 92-101 and 104-107.

The annual Perseid Meteor Shower will come to a peak on the evening/morning of August 12/13.  It should be a very good show this year since the moon will be set below the horizon at the time of the peak, so there will be optimal dark skies for the event.  Meteor watchers should be able to see up to 100 meteors per hour in a moonless sky if they are away from city lights, house lights, or any other light that pollutes dark skies.  There may be 50 meteors per hour or more visible the night before, or August 11/12, the same evening as the new moon and the massing of the planets. You may also see as many as 50 meteors per hour on the evening/morning of August 13/14.

The peak should come between 2 a.m. and 4 a.m. on August 13, or Friday morning.  Though it may also peak earlier in the late evening of August 12.  It would be a good time to take Friday off for a long weekend.  This is an optimal evening to go out in the warm evening air with the family and/or friends and look up at the stars and perhaps make a game of who counts the most meteors seen, or the most satellites seen drifting by.  Get a blanket and lay down on the ground on your back or on a reclining lawn chair.  Don’t forget the refreshments.  When I was a child, I used to sleep out on the lawn on such summer nights – sometimes with friends and relatives.

We lived out in the country in Upstate New York and the stars shone very brightly there.  The stars of the Milky Way were clearly visible. We did not have air conditioning and it was also an inexpensive and nice way to cool off and get into some interesting conversations about the stars and the universe.  Then there were special sound effects with the creatures of the night and also a nice light show the lightening bugs put on.  All of God’s creation was singing in harmony The price of admission is free of charge. 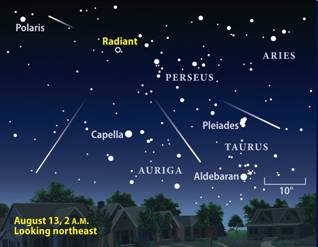 The radiant of the Perseids is located just above the sword Perseus is holding in his right hand as seen in the picture below. 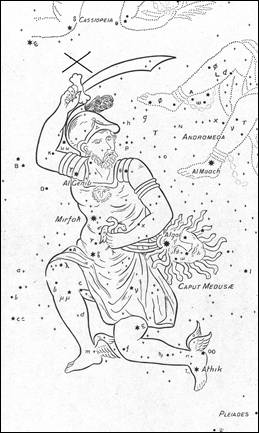 Perseus is a decan constellation of the Sign Aries and represents Messiah delivering His bride and His people Israel who are portrayed by the bound fish in Pisces and the chained woman Andromeda.  The Hebrew name for this constellation is Peretz, which means, the Breaker.  Here he is breaking the chains of bondage and setting His people free.

The meteors are entering the earth’s atmosphere at about 37 miles per second.  They make me think of sparks flying from Peretz’s or Messiah’s sword as he strikes and breaks the bands and chains of bondage that bind His people to the beast from the sea.  He is seen holding Rosh Satan, the head of Satan, in his left hand.  This is when he comes and does battle with the beast from the sea and his armies and destroys them and throws them into the lake of fire (Rev. 19).  The sparks will be a flyin. If I’m lyin I’m dyin as Festus Haggen might say.

This day will surely come.  This meteor shower is a yearly reminder of that day to come, where it is written in Micah 2:13:

"THE BREAKER is gone up before them...
Their King is passed on before them,
And the LORD at the head of them."

There are most certainly a number of conjunctions and a massing of the planets leading up to this year’s event.  There is plenty to see in late July and throughout August.  We will soon see if these events are a prelude to events that will soon take place on Earth.

HAVE MAZZAROTH WILL TRAVEL

I have a couple of tentative seminars that are being worked out for later this summer and early October.  The one later this summer will be in Salem, Oregon if all works out, and the one in October will be in Colorado Springs, Colorado.  I have also been invited to speak in Australia but that will take more working out to become a reality.  We will see what happens.

I am available to do seminars in any part of the United States and Canada or even most parts of the world.  The further away from my roosting area, the more expense it will take to do a Biblical Astronomy seminar.  If you have a large congregation who are interested in such a seminar, you can contact me by e-mail or phone and we can discuss it.

I will also teach at smaller fellowships, but the individual expense will be more.  My usual fee for a weekend seminar where I have to fly long distances and be away from home for three or four days is a minimum of $500 plus round trip airfare and room and board.  I do not need to stay at a hotel or motel and I am willing to stay at a believer’s home while doing the seminar.  I love spending time with family.

If the seminar is done within a few hundred miles of my roost, I can do the seminar in one day, such as a Shabbat.  My minimum fee for a one-day seminar close-by is $250 plus the cost of gas, wear and tear on my car, and food and lodging.

I usually get between $100 and $200 for luncheons in my local area.  I am a lot cheaper than Glenn Beck but don’t tell him that.

Call me at or e-mail me at starguy1@comcast.net if you are interested.

Yahweh bless you super-abundantly in His grace, mercy and love.