Nehemia Gordon from Jerusalem, Israel compiled the following New Moon Reports for the months of October and November 2010 and the beginning of the Eighth and Ninth Biblical Months.

October – “On Saturday October 9, 2010 the new moon was sighted from Israel. The moon was first sighted from Jerusalem by David Cachicas at 5:08pm and shortly thereafter by Nehemia Gordon, Yoel HaLevi, Klaus Binder, Rick Busenbark, Devorah Gordon, Willie Ondricek, and Peter Vandenbeukl.  The moon was also sighted from Mevaseret Tziyon by Dina Marcus at 5:17pm and shortly thereafter by Avi Marcus.”  Photos of the new moon over Jerusalem are posted at:  http://www.facebook.com/album.php?aid=237156&id=371892568628

The next New Moon is expected to be visible from Jerusalem near sunset on December 7, 2010 when the moon will be 3.77% illuminated and 15.43o above the horizon at 5 minutes past sunset.

I know this newsletter is real late in getting to you.  My stepfather fell asleep on November 14, and was gravely ill for about a week before that.  I have just been able to gather my thoughts together at this time to write this issue of Biblical Astronomy.   I was able to notify the online subscribers of my situation shortly after my stepfather fell asleep, but only now could I notify the postal subscribers.   I have been doing ten newsletters per year for a number of years, instead of twelve.  This helps to make up the difference in increased postage fees and prices in paper, ink, envelopes and other supplies.  I usually do a March/April issue, but this year hope to do one issue in March and the other in April to help make up for this double issue.

Thank you all who have sent e-mails to me with your condolences and prayers.  Thank you for your patience and understanding.

The planet Adom (Mars) passed 40 above the star Antares in the constellation Scorpius on November 9, 2010.  Mars passes Antares about every two years.  When Mars goes into retrograde motion when it is close to Antares it can pass it up to three times while moving back and forth over the star.  This year, Mars passes Antares only once.  In one of its portrayals, Adom represents Michael the warrior angel.  It can also represent blood and war.  The name Antares means rival of Mars.  Ares is the ancient name for Mars.  Ant or Anti means rival or opposition such as in Antichrist.  The name Antares also means the wounding (of the enemy).  The main theme of the Sign Scorpius is The Redeemer’s conflict.  The Hebrew name for this constellation is Akrab, which means the conflict or war.

This will most certainly happen in the not so far future.

Chart 539 shows the position of Mars in Scorpius two days before its conjunction with Antares.   This chart shows the position of the first crescent new moon, Mars, and Mercury at 5:17 pm as seen from Jerusalem on November 7, 2010.  The planet Mercury (Catab) represents the archangel Gabriel.  Here the two archangels are seen above and below the crescent new moon at the start of the Ninth Biblical Month.

THE LION GIVES A SOFT ROAR

This year’s annual Leonids meteor shower was pretty much a dud.  At its peak on November 17, it only produced around 20 or fewer meteors per hour as seen under a dark sky from most areas on Earth and many of those were difficult to see because of the bright moonlight, at least for viewing before midnight.

The Leonid Meteor Shower peaks every year in the early morning hours on November 17.  The radiant of the shower is in the head of Leo the Lion.  In Hebrew this constellation is named Arieh and represents the Lion of the Tribe of Judah. 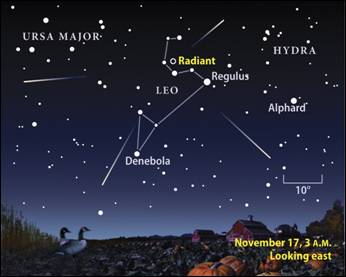 In some years, this meteor shower puts on a good to great show.  In 1833 it rained down hundreds of meteors per second.  In good years the Leonid’s meteor rate is around 100 per hour.  One estimate in 1833 was that 240,000 meteors fell in 15 minutes or close to a rate of one million meteors per hour.  This meteor storm occurred over the United States.  Most of those who viewed it were horrified.  Many of the meteors were very bright and left large trails.  I believe that most people would be horrified today to see such a spectacle.  All the stars of heaven appeared to be falling from the sky.

This brings to mind what is written in the Scriptures concerning the stars falling from the heavens such as in Matthew 24:29 and Mark 13:25.

MARS AND MERCURY IN CONJUNCTION

Chart 540 shows the position of Mars and Mercury in the constellation Scorpius at the time of the conjunction as seen from Jerusalem in the early evening sky on November 20, 2010.

Perhaps Michael and Gabriel got together for a meeting on that day.  At least the planets that represent them did.

The simulation of the event shown below is from Astronomy.com 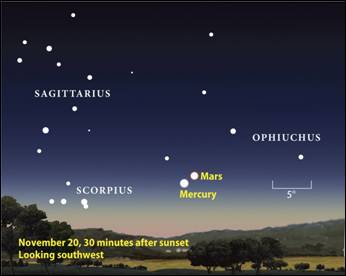 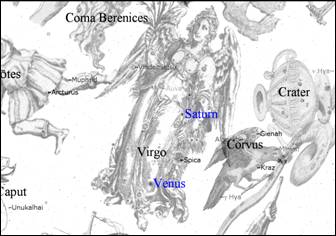 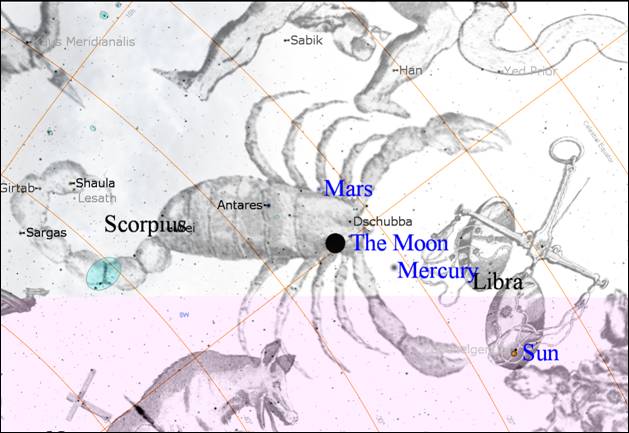 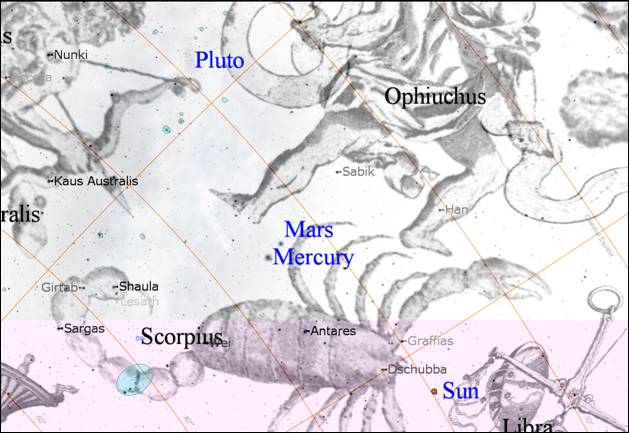 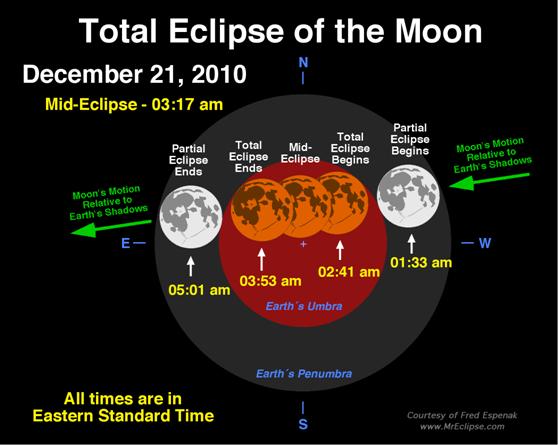 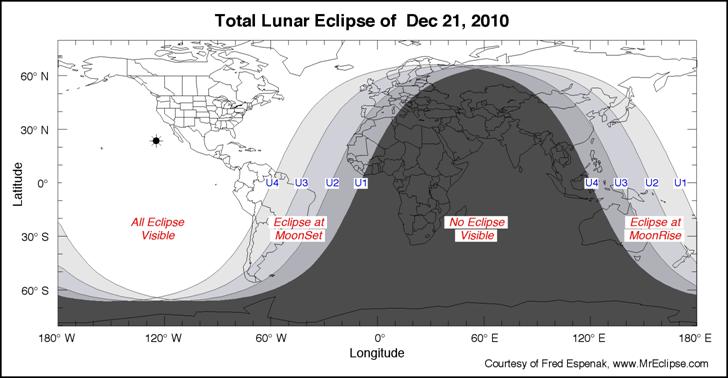 The chart below shows the moon in the club of Orion at the peak of the eclipse as seen from Portland, Oregon at 12:17 a.m. PST. 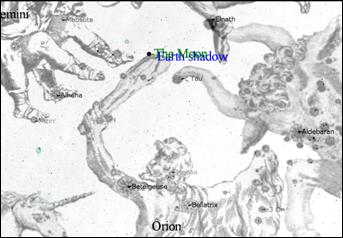 From many areas the eclipse is visible, it will most likely appear reddish in color during its peak.  It also may appear dark gray.  It will be well worth your while to go outside to view this eclipse.  Pray for clear skies.

As you can see on Chart 542, this eclipse will not be visible from Israel.

A blood red eclipse can represent the atoning blood of Messiah or blood and war against the enemies of Yahweh.  Here, the possible blood red moon is in the club of Orion.  The picture of the head of Orion in the chart above is backwards.  Orion should be looking at the Woolly hair area in the head of Taurus, which represents the wrath of Yahweh pushing or rushing forth against His enemies.  The club of Orion is also an instrument of wrath and is like a double whammy on Yahweh’s enemies.

Yahweh’s enemies include all those who reject Messiah and His atoning blood.  There will be blood on the club on December 21, 2010.

On December 31, Nogah (Venus) the Bright and Morning Star will be shining brightly next to a bright crescent moon in the early morning hours in the dawn sky about an hour before sunrise.  A similar event occurred on December 2, 2010.  The simulation below from Astronomy.com shows that event. 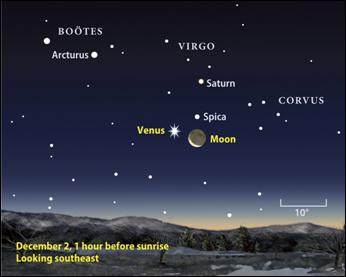 The event on December 31, should look very similar to the above event, except Venus and the crescent moon will be in Libra at that time and not in Virgo as seen in the simulation above.

Comet Hartley put on a pretty good showing in October and November for binocular or telescope observer, reaching a peak magnitude of around magnitude 5.0.  This brightness is within unaided eye visibility but for the average person, it is difficult to very difficult to find without the help of binoculars or telescopes.  I was not able to see it due mostly to cloud cover throughout October and early November.  Though I did not look intensely for the comet.

The following article on the comet by Kelly Beatty was posted on SkyandTelescope.com on November 4, 2010.

Below is a close-up photo of the nucleus of Comet 103P/Hartley taken by the Jet Propulsion Laboratory from cameras aboard the Deep Impact spacecraft from a distance of  435 miles on November 4, 2010. 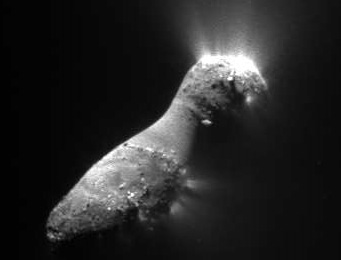 Wow!!!  What a great view of an oddly shaped rock.  Is this the glass slipper that fits on the foot of the Prince’s beloved?  The comet did pass through Cassiopeia, the bride making herself ready. Yes, it has been a very long night and I am getting a bit giddy.

May Yahweh bless you superabundantly.