The next New Moon, which will start the beginning of the Seventh Biblical Month and The Day of Trumpets or Shouting, is expected to be visible from Jerusalem near sunset on .  At that time the moon will be 7.4% illuminated and 10.890 above the horizon at 5 minutes past sunset.

I am writing this newsletter much earlier that intended.  My mother took another fall and broke her hip for the second time in the past 7 or 8 months.  I need to go to New York for a couple of weeks to help take care of another family member and to give my mom as much comfort and support as I can to help her get through this again.  I will be returning back to Oregon on August 25.  I may not have computer access while I am gone.  So if you want to order anything or have any questions, you may not get your ordered items or answers to questions until after I return.  Thank you for your patience and prayers.

This newsletter will be a short one with only 4 pages rather than the usual 6 pages.  I want to get this info to you now.  It usually takes me two to five days to recuperate after returning from a long trip before I can write anything.  If I wait to do the newsletter until after I return, it most likely would not be finished until the first week of September.  The September/October issue will be published soon after the new moon on September 10. 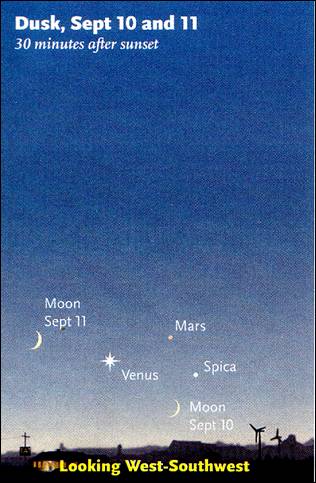 This will be a neat event to view at the blowing of the shofars kicking off and announcing the Day of trumpets.  Venus is the Bright and Morning Star representing Y’shuah.  Mars represents the atoning blood of Messiah or the archangel Michael.  The Hebrew name for the star Spica is Tsemech, which means THE BRANCH.  Tsemech is used exclusively of the Messiah in all 5 usages as “Branch” in the Bible  (Isa. 4:2, Jer. 23:5 and 33:15, Zech. 3:8 and 6:12).   The BRANCH is written with all capital letters in Zech. 3:8 and 6:12 in the King James Version of the Bible.  These scriptures are mostly referring to Messiah in the end times.

Chart 532 shows how the moon, Venus and Mars appear in the constellation Bethulah as seen from Jerusalem at 5 minutes past sunset on September 11.  The three celestial bodies are almost all in conjunction.  The moon passes Mars earlier on that day and around sunset it passes Venus. 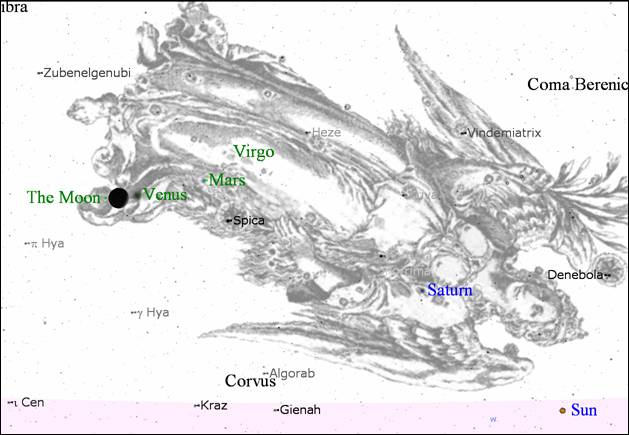 is Tishri 2, 5970 on the Biblical Calendar (as far as my calculations go). 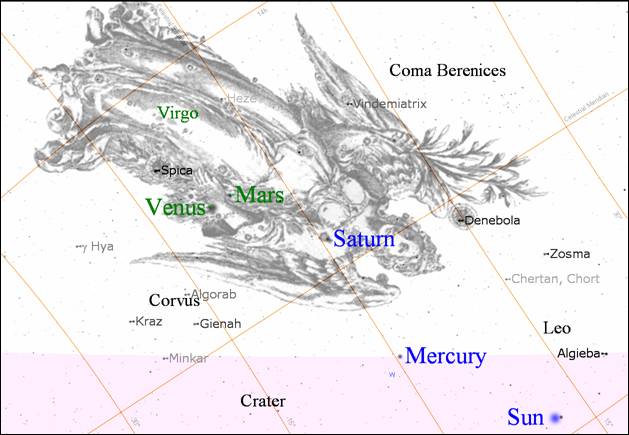 This completes a series of events that occur in August.  For the other events see the July 2010 issue of Biblical Astronomy.

After a long draught of no planetary conjunctions we are now getting a deluge. There is more to come.  The heavens are putting on a great show in August, September, and perhaps October this year.

Nogah (Venus) and Tsemech (Spica) will be in a close conjunction on .  There will be 1.00 of separation between them on that date as seen from Jerusalem.

Chart 534 shows the event as seen from Jerusalem at 44 minutes past sunset.  The planet Adom (Mars) is also close by.  Both Nogah (the Bright and Morning Star) and Tsemech (THE BRANCH) represent Y’shuah (Jesus).  And Adom here may be representing the atoning blood of Messiah. 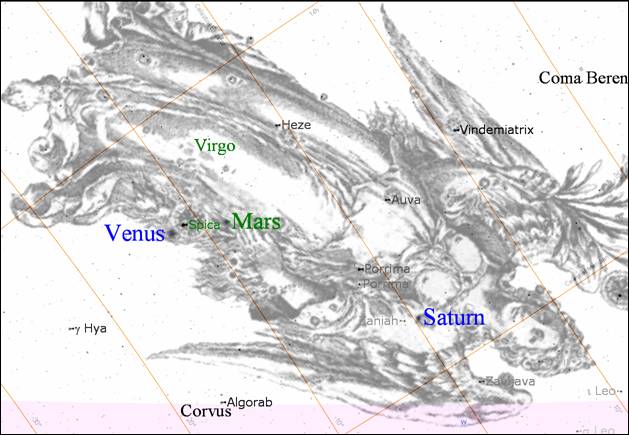 Chart 534 – Venus and Tsemech (Spica) in conjunction as seen from Jerusalem on September 1.

In the early morning hours of September1, from about to 5 a.m., the Alpha Aurigid Meteor Shower will peak.  This is not usually a great show since it normally puts out about 6 meteors per hour in contrast to the 60 per hour for the Perseids Shower that will take place in the early morning hours of August 12.  But at times the Aurigids put on a great show, such as happened in 1997 when the shower delivered an unexpected 130 meteors per hour. 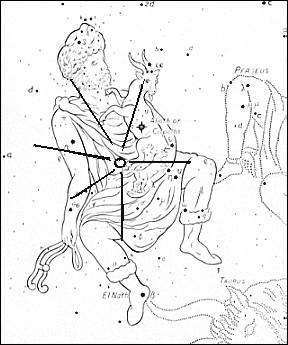 Auriga portrays the Great Shepherd, Messiah Y’shua, protecting his flock from the wrath of the Almighty in His judgment on his enemies on the day of His wrath.  For His sheepfold that belongs to Him, he took that wrath upon himself when he suffered for the atonement of our sins when He was crucified.  (See the article on Auriga in the June 2005 and the March/April 2010 issues of Biblical Astronomy for further details).

It is interesting that the meteors appear to be shooting forth from the Shepherd’s bosom.  It is where he holds his sheep closely to him.  See the two little kids in the picture.

If you plan on watching the meteor shower, it could be a dud with only 6 meteors per hour, or it could have a surprise in store such as what happened in 2007.  The best time to see the meteors is in the early morning hours of September 1, but you may see some also in the late evening of August 31.  If you stay up past midnight, you are more likely to see more meteors.

The light from the last quarter of the moon may put a bit of a damper on viewing.  It rises at 11:28 p.m. in Jerusalem and around that time in local areas around the globe, give or take 15 minutes.

Sept. 10 – another Triangular massing of Venus, Mars, and Saturn above New Moon of Tishri 1 (this issue pg. 1).

Sept. 11 – Moon, Venus and Mars near conjunction.  The women clothed with the sun and moon below her feet?  (C532)