Nehemia Gordon from Jerusalem, Israel compiled the following New Moon Report for the month of June 2010 and the beginning of the Fourth Biblical Month.

“On June 13, 2010 the new moon was sighted from Israel. The moon was first sighted: from Jerusalem by Terry Telligman at 7:57pm; from elsewhere in Jerusalem at 8:02pm by Willie Ondricek, Nehemia Gordon, Yoel HaLevy, and Devorah Gordon;  from another location in Jerusalem at 8:05pm by Paul Beattie; from Ariel at 8:11pm by Amanda Boyd, Ruth Burcham, and Deborah Leslie; from Bar Giora at 8:20pm by Tzvi ben Daniel; from Ramat Gan at 8:22pm by Isaac Kight.”

The next New Moon is expected to be visible from Jerusalem near sunset on July 13, 2010 when the moon will be 4.98% illuminated and 13.80 above the horizon at 5 minutes past sunset.

MARS AND REGULUS IN CONJUNCTION

On June 6, 2010 the planet Adom (Mars) came into a close conjunction with the star Regulus in the Sign and constellation Arieh (Leo).

Mars can either represent Michael the warrior angel, or blood and war, or the atoning blood of Messiah, depending on the circumstance.  Regulus is not only the king star of Arieh the Lion, but has been known from ancient times as the King star of all the stars, or the King of the Universe.  The name Regulus means treading under foot.

The Lion is pouncing on the head or heads of Hydra the water serpent who in ancient times had seven heads.  It is a sea beast or a beast from the sea with seven heads.  The Lion is about to tear it to pieces.  This portrayal is of the serpent or dragon when he is finally destroyed after being bound for 1,000 years and at the end of the Millennial Kingdom of Messiah.  See Chart 517 in the March/April 2010 issue of Biblical Astronomy for the portrayal of the lion and the serpent.  That picture is not exact, for the lion’s feet should be much closer to the heads of the serpent as seen in earlier planispheres.

The simulation below from Astronomy.com shows the conjunction of Mars and Regulus as they come within 9/10ths of a degree from one another on June 6, 2010. 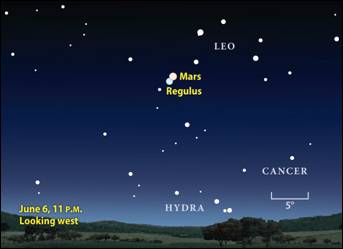 Comet McNaught became visible to the unaided eye around mid June and is now shining at a magnitude of 5.1.  The comet should remain a 5th magnitude comet through the first week of July before it begins to dim beyond unaided eye visibility.  Though it is visible to the unaided eye, it is still somewhat difficult to find without binoculars and you need to know where to look.  I have not yet had the opportunity to see it because of cloudy weather for the past two weeks.  The sky is now beginning to clear here in Oregon City and I hope to see the comet soon for myself.  Below is a telescopic photo of the comet taken by Michael Jaeger from Austria on June 10. 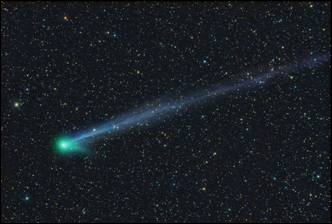 Chart 524 shows the path of Comet McNaught from June 7, to July 14, 2010.  The comet should still be about a 5th magnitude object as it enters the constellation Gemini around July 3rd.

The chart shows the path of the comet as it goes through the constellations Perseus, Auriga, Gemini and Cancer.  It was in the constellation Perseus when it first became visible to the unaided eye.  At this writing, the comet is in Auriga and is holding steady at its current brightness.  It is doubtful that will get any brighter before it fades unless it has an outburst.  The comet will most likely be too dim to see with the unaided eye after it leaves Gemini and heads into Cancer.

The light of the full moon filling the night sky over the latter days of June will make it most difficult to spot the comet without binoculars or a small telescope.

The main portrayals of the four constellations in the chart that the comet is passing through are:  Perseus – “The Breaker” delivering the redeemed; Auriga – Safety for the redeemed in the day of wrath; Gemini – Messiah’s reign as Prince of Peace; Cancer – Messiah’s redeemed possessions held fast, or a shelter, refuge or hiding place for Messiah’s people in a time of great tribulation.

No matter what happens, our Father is always watching over us.  Trust in Him.

Chart 525 shows the position of the moon in the constellation Sagittarius at the peak of the eclipse as seen from Portland, Oregon at 4:30 a.m. PDT. 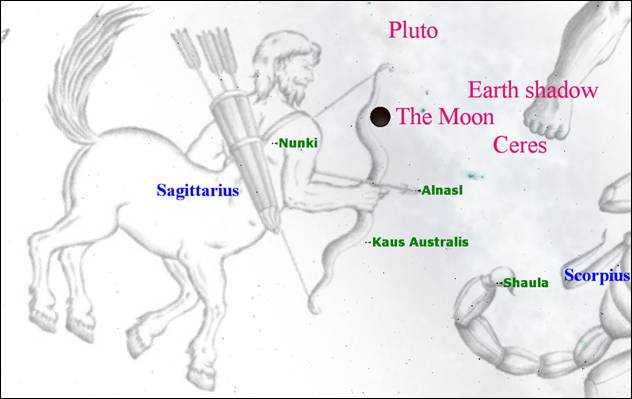 Chart 525 – Position of the moon in Sagittarius at the peak of the Partial Eclipse at 4:30 am PDT as seen from Portland, Oregon.  Not seen here, but only the upper half of the moon is covered with the dark shadow of the earth as it is partially eclipsed.

The main theme of the Sign and constellation Sagittarius is The Redeemer’s Triumph.

The sun will be totally blacked out on July 11, 2010.  This will occur over sparsely inhabited areas such as the Pacific Ocean and parts of Chile and Argentina where it will be seen from a handful of small towns and villages.

Chart 526 shows the positions of the sun and moon in Gemini at the peak of the eclipse as seen from the southeastern Pacific Ocean.  Comet McNaught is just to the east or left of Gemini and  may be visible when the sky darkens over those areas where viewers will see the total covering of the sun by the moon’s shadow. 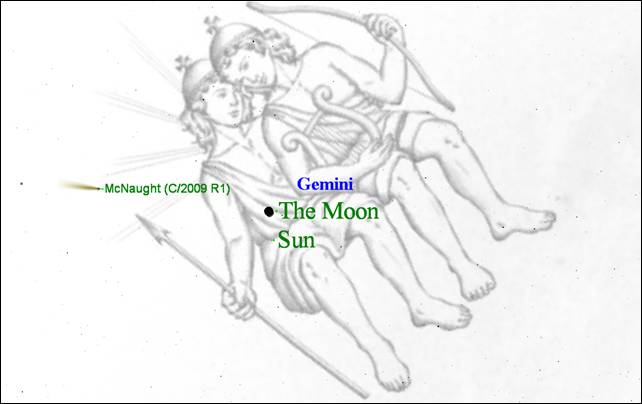 The main theme for the Sign and constellation Gemini is Messiah’s reign as Prince of Peace.  See the May 2010 newsletter where Gemini was the feature constellation. 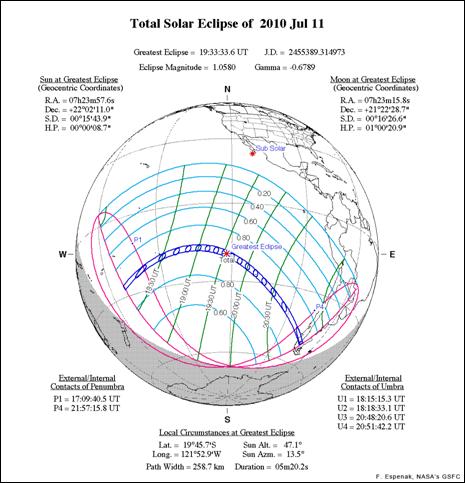 This is the last newsletter for the 2009/2010 subscription year.  If you have not already re-subscribed, you will need to subscribe to the upcoming July 2010 to June 2011 subscription year to get your new password.

You can find more information about subscribing in the May 2010 issue of Biblical Astronomy. 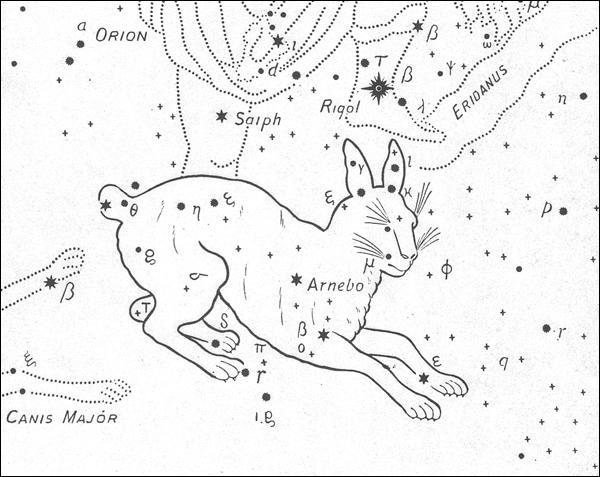 LEPUS (the Hare) or ENEMY

The enemy trodden under foot

Lepus is a decan constellation to the Sign Gemini.

Isaiah 63:3, 4) –  “…for I will tread them in Mine anger, and trample them in My fury; and their blood shall be sprinkled upon my garments, and I will stain all of my raiment.  For the day of vengeance is in mine heart, and the year of my redeemed is come.”

Stars in Lepus and the meanings of their names

Arnebo (Heb.) – the enemy of Him that cometh.

Arnebeth (Arab.) – the hare, enemy of what cometh, pluck.

The following is from E. W. Bullinger’s The Witness of the Stars pertaining to the three decan constellations of Gemini and then particularly speaking of Lepus.

“The names of the three constellations of this Sign, as well as the pictures, are all more or less modern, as is manifest from the names being in Latin, and having no relation to the ancient names of their stars. To learn their real meaning, therefore, we must have recourse to the ancient Zodiacs. In the Persian planisphere the first constellation was pictured by a serpent. In the Denderah (Egyptian) Zodiac it is an unclean bird standing on the serpent, which is under the feet of Orion. Its name there is given as Bashti-beki. Bashti means confounded, and Beki means failing. “

The print below is that of Lepus from the Denderah Zodiac which E.W. Bullinger is referring to above.  The legs and feet belong to Orion, and below his feet is the unclean bird standing on the head of the coiled serpent.  His foot as seen crushing the hare’s head in the picture above or previous page should be seen crushing the head of the serpent. 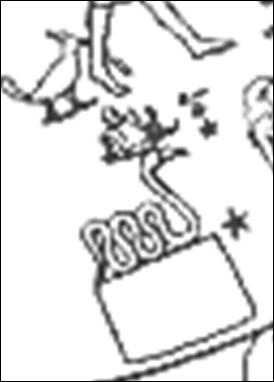 “There can be no mistaking the voice of this united testimony. For this enemy is under the down-coming foot of Orion, and it tells of the blessed fact that when the true Orion, "the Sun of Righteousness, shall arise," and "the true light" shall shine over all the earth, He "shall tread down the wicked" (Mal 4), and every enemy will be subdued under His feet. "It is He that shall tread down our enemies" (Psa 60:12), as He has said:  (Isaiah 63:3, 4.”