Nehemia Gordon from Jerusalem, Israel compiled the following New Moon Report for the months of September and October 2011 and the beginning of the Seventh and Eighth Months on the Biblical Calendar.

September – “It was impossible to see the new moon from Israel tonight (Wednesday September 28). The lagtime - the time from sunset to moonset - was only 28 minutes making it impossible to see the limited light of the moon against the backdrop of the setting sun. There has never been a successful new moon sighting with only 28 minutes of lagtime. The moon should be easily visible Thursday night from Jerusalem.”

“On Thursday September 29, 2011 the new moon was sighted from Israel. The new moon was first sighted: from Jerusalem by Oriana Torres at 6:25pm followed by David Cachicas, Daniella Cachicas, Sarita Herrerra, and Marta Alvarez; from elsewhere in Jerusalem by Willie Ondricek at 6:26 pm followed by Devorah Gordon; from Mevasseret Tziyon by Dina Marcus at 6:30 PM followed by Avi Marcus; from Givat Hamotos by Bruce Brill at 6:34 pm; from Haifa by Devorah Boer at 6:35 pm followed by Zeev Boer, Areena boer and Tim Boer; from Gush Etzyon by Yoel Halevi at 7:27 pm.

The chart below shows the New Moon on October 28 as seen from Jerusalem about 23 minutes after sunset.  The moon is between the constellations Libra and Scorpius with the planets Venus and Mercury below right in Libra.  The red lines are the constellation borderlines.  If you are reading the pdf file then you can zoom in on the moon to see the crescent using the Marquee Zoom feature in Adobe Reader. 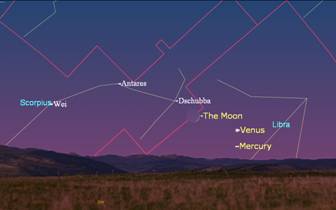 The next New Moon is expected to be visible from Jerusalem, Israel near sunset on November 26, 2011 when the moon will be 2.43% illuminated and 11.290 above the horizon at five minutes past sunset.

I know I used a full page here for the New Moon Report, but it is now recorded for future use when looking at borderline situations for future sightings of the New Moon.

There are some interesting conjunctions that will take place on November 9.  They are interesting because two of them occur in two different constellations at the same time on the evening of November 9, and the other takes place only eight hours before.

Chart 572 shows the lineup of Antares and the planets Venus and Mercury on the evening of November 9, 2011.  The green lines are the celestial grid lines.  The longitudinal lines are from top to bottom. Venus is shown here at the same celestial longitude and in direct conjunction with the star Antares at 4 p.m. EST.  Mercury will reach that same longitude 8 hours later at Midnight.  It is also at Midnight that Mars reaches conjunction with the star Regulus in Leo.

Chart 573 shows Mars in the same longitude and in direct conjunction with Regulus at Midnight EST on November 9/10.

The chart below shows Venus, Mercury and Antares on the evening of November 9, 2011 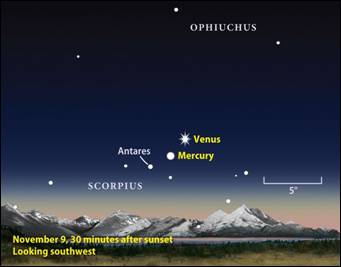 From the Latin Antares means Rival of Mars, as Antichrist is the rival of Christ or Messiah.  Ares is the ancient name for Mars. Antares is in the heart of the King’s enemy, the scorpion.  This enemy is the serpent, the dragon, Satan or the Devil.  Mars represents the warrior archangel Michael in its portrayal of the conflict between the serpent and the serpent’s seed and the woman and the woman’s seed.  Michael does battle a number of times against this rival or enemy as shown in the Scriptures.  Michael is the guardian of Israel against Satan.

Here it is Venus, The Bright and Morning Star that is in conjunction with Antares and shortly after, Mercury reaches conjunction with this star.  Mercury represents the other archangel, Gabriel.  It is at the same time that Mars reaches conjunction with Regulus in Leo.  Regulus is in the heart of the Lion according to many Astronomers, but in the Foot of the Lion according to others.  Regulus means treading under foot.  Regulus is the King Star of all the stars in the heavens, though it is by far, not the brightest star.  It represents the King of Judah.   The Lion’s foot is seen coming down on the head or the back of the neck of Hydra (not shown in this chart), the seven headed water serpent or beast from the sea.

Now this can be portraying either an actual conflict in the senses world or in the spiritual word or both that is taking place or about to take place.  Spiritual warfare takes place every day and we do not see many things with our five senses.  This celestial event may be portraying a greater conflict than normal.  If there is a major conflict about to take place soon in the senses world, we will soon see. 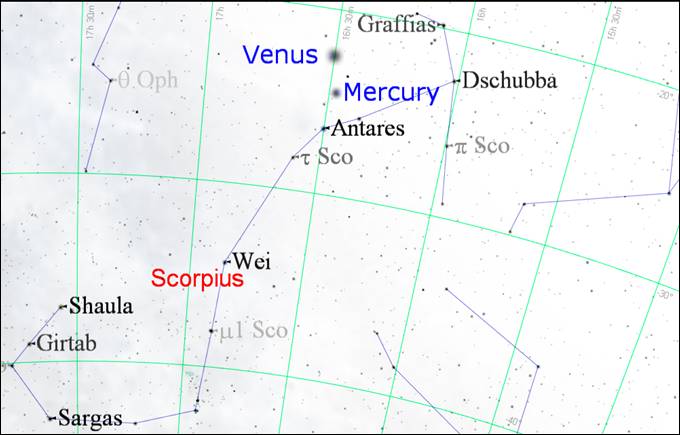 Chart 572 – Venus, Mercury and Antares at 4:00 pm on November 9, 2011 (Antares and Mercury come into   conjunction at Midnight EST on November 9/10). The Venus/Antares conjunctionmay have been seen from different time zones, or in near conjunction 30 minutes after sunset from various sites. 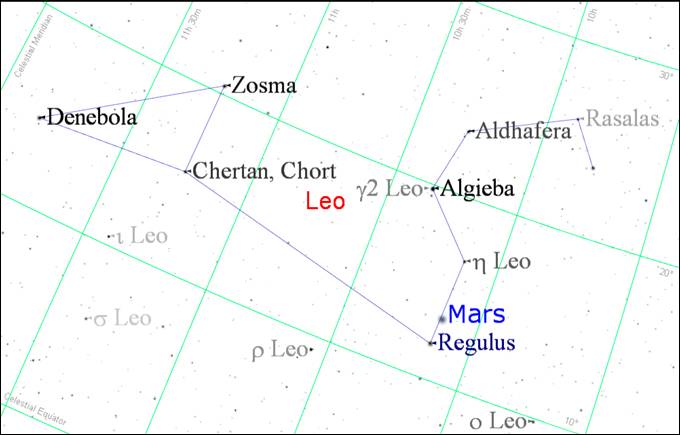 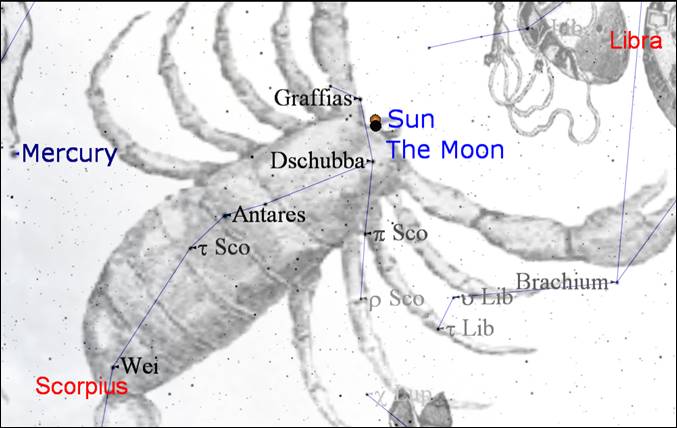 Chart 574 – Position of the sun and the moon in Scorpius as seen from Antarctica during the partial solar eclipse on November 25, 2011.  The moon covers about 1/3rd of the sun here at its peak 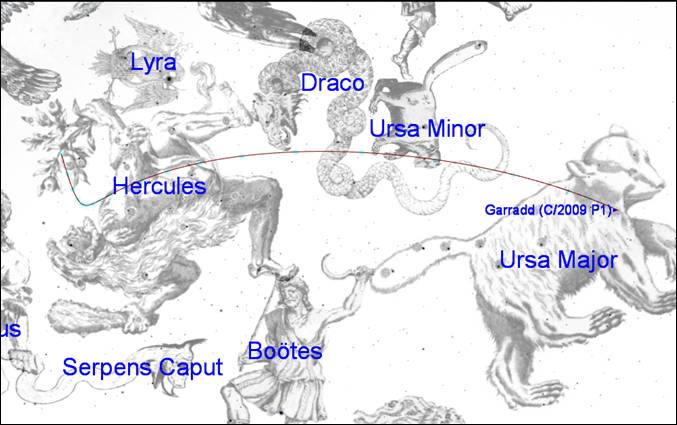 It is that time of the year again for the Leonids Meteor Shower.  Below is a short article from Astronomy.com on the upcoming shower.

Will the Lion sleep or roar?

“The Leonid meteor shower always brightens November’s sky. In some years, it does so only a little; in others, it brings a veritable storm of “shooting stars.” The occasionally wild swings from year to year depend on how Earth encounters the various debris streams laid down by the shower’s parent comet, 55P/Tempel-Tuttle.

Although astronomers caution that there’s no certainty with the Leonids, they don’t expect a spectacular show in 2011. The shower should peak before dawn November 18, when a Last Quarter Moon lies near the shower’s radiant in Leo the Lion. Observers with an otherwise dark sky can expect to observe up to 10 meteors per hour. To see the most, head out to the country and face away from the Moon’s glare.”

The chart below shows the Radiant of the Leonids Meteor Shower along with the position of the moon and Mars on November 18, at 3 a.m. as seen from the eastern United States. 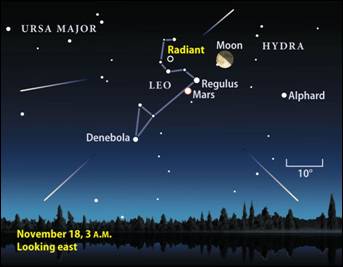 Though this is an interesting event following the conjunctions of November 9, with one being that of Mars and Regulus, it will not be a spectacular event and most likely even wimpy compared to normal years.  It is also interesting that the following celestial event takes place in Scorpio, the other constellation with conjunctions on November 9.  This event will also not be much of a sign since it is not seen by most of the world.

There will be a partial solar eclipse on November 25, 2011 in the constellation Scorpius.  About 1/3rd of the sun will be covered by the moon as seen from Earth at the peak of the eclipse.  This eclipse will not be visible from Israel or the United States.  The eclipse will be visible from parts of New Zealand, South Africa, Tasmania, and Antarctica.

Chart 574 shows the position of the sun and moon in the head of Scorpius at the time of the peak of the eclipse as seen from a location in Antarctica.

Most of the time a solar eclipse occurs there is a lunar eclipse that takes place about 2 weeks before of two weeks after.  There will be a total, possibly blood red, lunar eclipse that will take place in the constellation Taurus on December 10.  This eclipse will be partially or totally visible from various parts of United States and Israel as well as the rest of western North America, Australia, Asia, and parts of Europe.  There will be more on this eclipse in the December 2011 issue of Biblical Astronomy.

by Alan MacRobert and Tony Flanders

We're talking about Comet Garradd (C/2009 P1). In early September it was already a fine sight through telescopes of all sizes, shining high in the evening sky at 7th magnitude. It has a bright head, a sharp starlike nucleus, and a tail that's stubby but well defined. And it's forecast to shine near its 6th-magnitude best all the way from October to mid-March. Not since Hale-Bopp has any comet remained so bright for so long.

Comet Garradd passes through the Coathanger asterism on the evening of Friday, September 2nd, then crosses the northwest corner of Sagitta, and soon enters Hercules, where it will remain until February. That means it’s high in the west after nightfall in October, lower but still in good view in November, and near the west-northwest horizon at the end of twilight around Christmas. But by then it’s already up higher in the east before the first light of dawn; the best viewing tips from evening to morning on December 16th.                  As the comet climbs high in the early-morning sky of January and February, it will pass the Keystone of Hercules, skim ½° by the globular cluster M92 on the morning of February 3rd (mark your calendar), then sail northward past the head of Draco. It should stay bright all the way into spring as it returns to the evening sky.

Click here for a full-page, printable finder chart for Comet Garradd from September through early February, 2012.

Why is it changing so slowly? Comet Garradd is unusually large and distant as 6th-magnitude comets go. It never comes closer to the Sun than Mars’s average distance; at perihelion on December 23rd it’s 1.55 astronomical units from the Sun. Nor does the comet ever come near Earth; it’s about 2 a.u. from us all through October and November, and when closest next March 5th it will still be 1.27 a.u. away. Too bad! Garradd might have qualified for “Great Comet” status if had been on a trajectory to pass close to the Sun and if Earth weren’t on the wrong side of its orbit at the time.

This comet will most likely not become visible to the unaided eye.  I usually do not cover comets below a 5th magnitude (perhaps sometimes 6th magnitude) since they cannot be seen with the unaided eye.  That is the criteria that I set up for myself years ago, since Astronomers from ancient times only saw comets, stars etc. that were visible to them without binoculars or telescopes which were not around until about 400 years ago.  A sign is something you see, not something that you do not see.  If we were to treat all comets, even those that can be seen only with optical aids as signs, then we would have dozens of signs per year and it would become quite redundant and nothing special.  I also consider the rarity of certain events to as if they are pertinent signs or not.  There has to be some criteria.  Something that happens every day or every week or even every year is nothing special.

Such was the case with Comet Elenin.  Many were writing on its supposed magnificence and it being a great sign.  I did not treat that comet as such and most likely would not have written on it except there was so much hyped up hogwash going around about it and I had many inquiries from subscribers.

Comet Garradd will not be very bright and most likely not seen with the unaided eye but it is unique since it stays pretty much around a 7th magnitude and seen by telescopes from the Fall Feasts of 2011 to the Spring Feasts of 2012.  I doubt that it will have an outburst and become much brighter than predicted, but one never knows for sure.

An Asteroid the size of an aircraft carrier missed Earth by 200,000 miles (3 hours if it crossed our orbital path) on November 8, 2011.  It is large enough to vaporize a small to medium sized city. It was a close call for an asteroid.  See the following link. 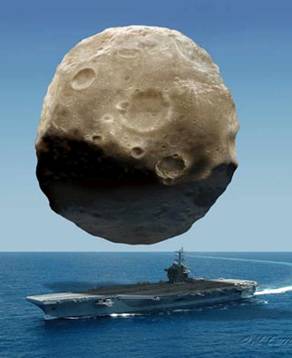