Nehemia Gordon from Jerusalem, Israel compiled the following New Moon Report for the month of November 2011 and the beginning of the Ninth Month on the Biblical Calendar.

“On Saturday November 26, 2011, the new moon was sighted from Israel. The moon was first sighted from Ariel by Adina Mecklenburg at 4:45pm followed by Anna Coulter, Frank Mecklenburg, and David Coulter; from Poriya Illit by Zev Boer at 4:47pm followed by Devorah Boer; from Jerusalem by Yoel Halevi at 4:48pm followed by Willie Ondricek, Nehemia Gordon, and Zoran Vucinic.”

Pictures of the new moon sighted from Jerusalem are posted at: http://tiny.cc/xu707

I deeply apologize for the lateness of this newsletter.  I lost most of my programs when I downloaded a gift from my wife.  I did not realize the size of the file (over 18 gigabytes) until it was too late.  I only had 14.2 gigs of space in the drive that I attempted to load it to.  All of my astronomy programs were cannibalized and would not operate properly.  I could not even load them back in.  It took a while to fix the problem but it is now resolved, I hope.  I also had some health issues preventing me from writing for a while.  I am much better now.  It seems to happen every year at this time of the year.  I hope to have the January issue published soon after this issue as well as the February issue.

There is not much going on astronomically in 2012, except for the rare transit of Venus in June, at least as far as foreseeable astronomical events.  Perhaps there will be few surprises in store.  The total lunar eclipse that occurred in December 2011 will have to hold us for a while.  I will be writing on different areas in Biblical Astronomy during the next five or six months.

I should have all 48 constellations done as the feature constellation with pictures and write up within the next four or five months.  It will be nice to have those completed.  It has been a work in progress for a number of years now.  I will be mostly using the pictures from E.W. Bullinger’s The Witness of the Stars.

There was a total lunar eclipse on Shabbat (Saturday), December 10, 2011.  This eclipse was visible from the western United States and Israel.  The eclipse was not  seen in its entirety from Israel, but the moon was totally eclipsed as it rose above the eastern horizon as seen from Jerusalem.  The moon at that time was just starting to come out of the total eclipse.

Chart 576 shows the moon when it was totally eclipsed as seen rising in the east from Jerusalem at 5:10 p.m. JST.  The Umbra shadow of the earth started to recline from the moon at that time and completely left the moon at 6:10 pm JST.  The moon appeared blood red from most locations. 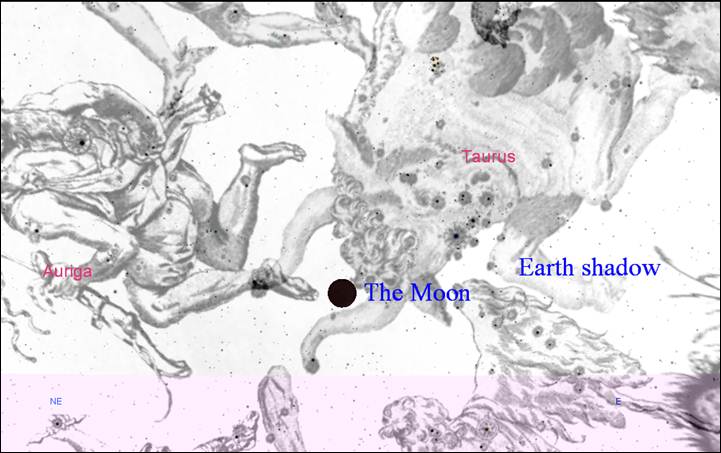 The moon was between the horns of Taurus at the time of the eclipse.  This area of the Reem represents the wrath of Elohim and Messiah rushing forth to destroy the enemy.  A blood red moon can represent blood and war or the atoning blood of Messiah.  The atoning blood of Messiah gives atonement for His people but wrath poured forth on His enemies.  The main theme of Taurus is Messiah, the coming Judge of all the earth.

Chart 577 shows the totally eclipsed moon as seen from Portland, Oregon at 6:10 a.m. PST on Shabbat December 10.  It appeared as such from most of the west coast.  The moon is in the woolly hair area of the reem.  This is the area Saturn was in when Messiah was born in 3 B.C. and when he ascended to be seated at the right hand of his Father, and also on Pentecost following the crucifixion in 28 A.D..  All of these events dealt a great blow to the serpent's head. 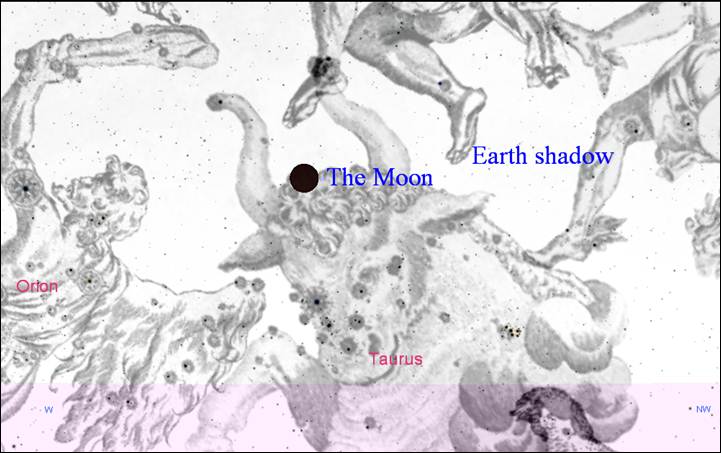 Chart 578 shows the position of Saturn in Taurus on September 11, 3 B.C. when Messiah was born. 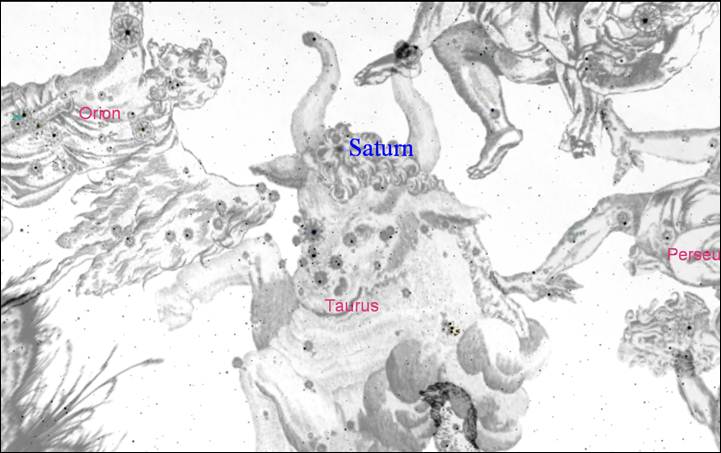 Chart 579 shows the position of Saturn in Taurus on June 10, 28 at the day Messiah ascended to the right hand of the Father.  Saturn was also very close to this same position 10 days later on Shavuot, when the apostles and many others received the gift of holy spirit. 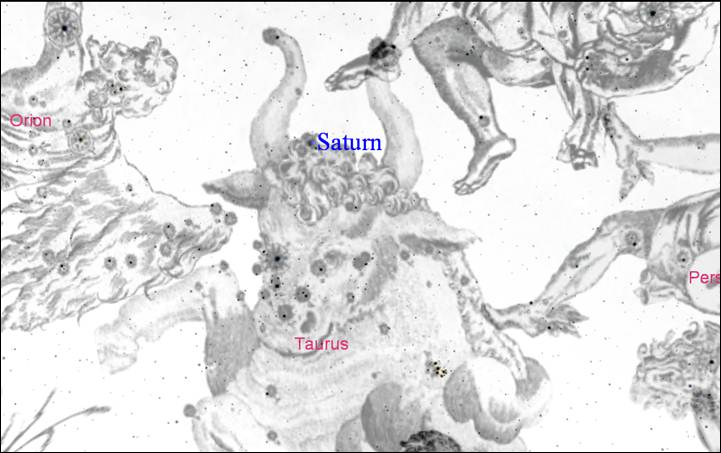 I am not saying that something of great importance is going to happen soon but I am showing when events of great importance occurred when Saturn (Satan) was in this same woolly hair area of Taurus.  Satan got quite a bashing at those times.  These are facts that I thought you might be interested in.  What is to happen remains to be seen.

Kendra Lakkees took the photo of the eclipse seen below.  There was no mention of where the photo was taken from.  It may have been from India, since most of the photos submitted were taken there.  There were some photos taken from California, but they were not the best quality.  This is the best picture that I found. 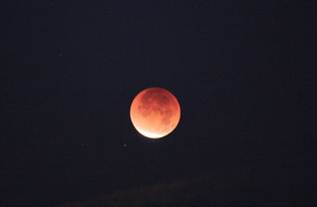 The following article on December meteor showers is from Astronomy.com

‘To most observers, December brings hope for a grand display of Geminid meteors. This year, unfortunately, the December 14 peak coincides with a waning gibbous Moon. The shower’s meteors appear to radiate from Gemini, and the Moon lies just one constellation to the east, in Cancer. The bright moonlight will drown out the majority of “shooting stars” that otherwise would be visible.

As an alternative, you might concentrate on the Ursid meteor shower. It peaks the night of December 22/23 under moonless skies. Although the shower typically produces only 10 meteors per hour, it occasionally spikes to rates 5 times higher. The shower’s radiant lies in Ursa Minor, near the top of the Little Dipper’s bowl. This region’s proximity to the North Star, Polaris, means it never sets from midnorthern latitudes. The radiant does climb higher after midnight, however, so the best views should come during early morning hours.’

The chart below shows the radiant of the Ursid Meteor Shower in Ursa Minor. 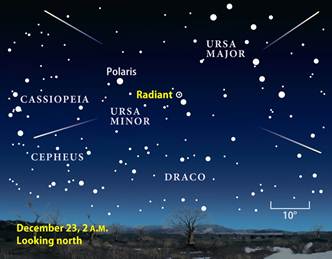 The theme of the constellation Ursa Minor is The lesser sheepfold.  This means lesser in number but not of importance.  This constellation also represents the seed of Abraham.  For more info on this constellation see the July 2011 issue of Biblical Astronomy where it is featured.

Yahweh bless you richly in His mercy and love. 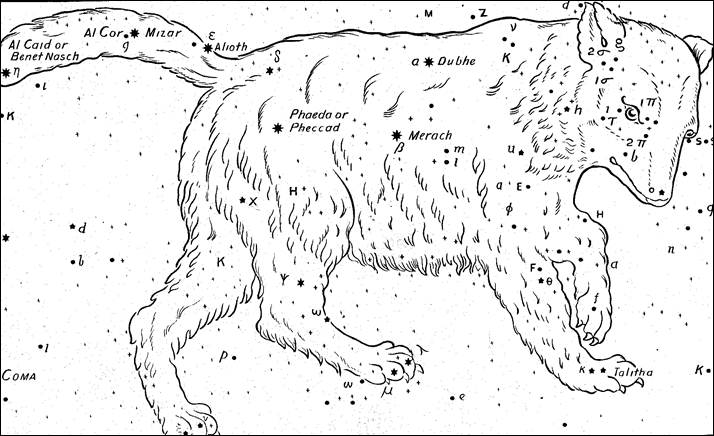 The fold and the flock

Ursa Major is a decan constellation of the Sign Cancer.

Al Naish or Annaish (Arab.) – the assembled together, as sheep in a fold.

Ash (Heb.) – The ancient Jewish commentators interpreted Ash as the seven stars of this constellation.  They are called by others Septentriones, which thus                           became the Latin word for North.

Obadiah 17-19, RV – “But in Mount Zion there shall be those that escape, And it shall be holy:  And the house of Jacob shall possess their possessions."

Ezekiel 34:12-16 (see below with E.W. Bullinger’s writing, or on next page at the bottom section of the page).

Stars in Ursa Major and the meanings of their names

Alioth (Heb.) – a she goat.  The same as the star Alioth in the constellation Auriga.

Al Kaid (Arab.) – the assembled.  It is also called Benet Naish which means, the daughters of the assembly.

The names of other stars, not identified, all give the same testimony:  El Alcola (Arab.), the sheepfold (as in Psalm 95:7; and 100:3); Cab’d al Asad, multitude, many assembled; Annaish, the assembled; Megrez, separated, as the flock in the fold; El Kaphrah, protected, covered (Heb. Redeemed and ransomed); Dubheh Lachar (Arab.), the latter herd or flock; Helike (so called by HOMER  in the Iliad), company of travelers; Amaza (Gr.), coming and going; Calisto, the sheepfold set or appointed.

The following is from E.W. Bullinger’s The Witness of the Stars, pp. 156-157.  “There is not one discordant voice in the rich abundance of this testimony. We have nothing to do here with the Grecian myths about bears or wild boars. We see only the innumeralbe seed gathered by Him who scattered (Jer 31:10).

Many are the Scriptures we might quote which speak of this gathering and assembling of the long scatterd flock. It is written as plainly in the Book, as it is in the heavens. The prophecies of this gathering are as conspicuous in the Word of God as the "Seven Stars" in the sky. It is difficult even to make a selection from the wealth of such promises; but few are more beautiful than that in Ezekiel 34:12-16:

"As a shepherd seeketh out his flock
In the day that he is among his sheep that are scattered;
So will I seek out my sheep,
And will deliver them out of all places where they have been scattered in the cloudy and dark day.
And I will bring them out from the people,
And gather them from the countries,
And will bring them to their own land,
And feed them upon the mountains of Israel by the rivers
And in all the inhabited places of the country.
I will feed them in a good pasture,
And upon the high mountains of Israel shall their fold be:
There shall they lie in a good fold,
And in a fat pasture shall they feed upon the mountains of Israel.
I will feed my flock,
And I will cause them to lie down, saith the Lord GOD (Adonai Jehovah).
I will seek that which was lost,
And bring again that which was driven away,
And will bind up that which was broken,
And will strengthen that which was sick:
But I will destroy the fat and the strong;
I will feed them with judgment."

It is of this judgment with which this book, and indeed the whole Revelation, ends, in the next and final chapter.   But before we come to that we have one more picture in the third constellation of this Sign, which combines the first two in one.”