Nehemia Gordon from Jerusalem, Israel compiled the following New Moon Reports for the months of January and February 2012 and the beginning of the Eleventh and Twelfth Months on the Biblical Calendar.

January –  “On Tuesday January 24, 2012 observers looked for the new moon from Jerusalem but the horizon was covered with heavy clouds and it was not sighted. The moon should have been easily visible had there been no clouds.

My photos of this month's new moon over Jerusalem are posted at:

The next New Moon is expected to be visible from Jerusalem, Israel near sunset on March 23, 2012 when the moon will be 1.01% illuminated and 9.780 above the horizon at five minutes past sunset.    This may be somewhat difficult to see unless the sky is very clear over the western horizon.  If there is overcast or if the first crescent light is not seen that evening, then the next evening, March 24, will start the New Year.  I am looking forward to the New Moon Report in March.  This should be the New Moon of the Abib and the beginning of the Biblical New Year.

The chart below shows the sun and the moon in the Sign and constellation Pisces in the early evening of March 23, 2012.  They will also be in this constellation on March 24. 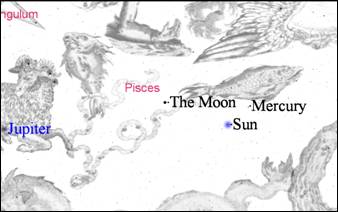 There were no and are no major celestial events in the month of February.   However, on February 25, the two-day old crescent of the New Moon will be very close to the brightly shining Venus.  The moon and Venus will be in the Sign Pisces at that time. The chart below shows how the event may appear over the eastern United States. 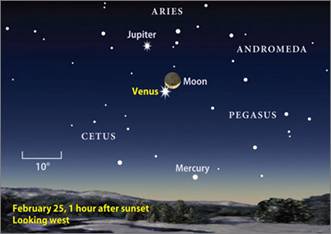 The three-day old crescent moon will appear close to Jupiter in the early evening of February 26.  At that time the moon and Jupiter will be in the Sign Aries.

The Sign and constellation Pisces represents the nation of Israel, especially when Israel is going into bondage or being delivered from bondage.  The main theme of the Sign and constellation Aries is: The blessings of the redeemed consummated and enjoyed.   The planet Venus (Nogah) represents the Bright and Morning Star, and the planet Jupiter (Zedek) represents Yahweh our Righteousness or Yahshuah, who is the High Priest forever according to the order of Melchizedek.

Though Pisces is seen in bondage, Aries (The Lamb) is breaking the bands that bind them to the beast from the sea (Cetus).  For many of you who have been subscribers to Biblical Astronomy for many years, all of this explanation must seem quite redundant to say the least.  But there are many new subscribers who are not so familiar with the meanings of the constellations and planets.

I will now cover the celestial events that take place in the first half of March.  The March/April 2012 issue of Biblical Astronomy will be published soon after the New Moon Report for March.  This will be soon after March 23rd.  We should have the barley report in by early March and the next new moon will be the New Moon of the Abib to kick off the Biblical New Year.

The planet Mars (Adom) will reach opposition on March 3, 2012.  It will reach its closest approach to the earth during this particular cycle on March 5th, when it will be 62.6 million miles away.  It will be at its brightest for this particular cycle and will appear 13.9” across, which is 13.9 arc seconds.  There are 360 degrees in the circle around the heavens as seen from the earth.  In each degree there are 3,600 arc seconds.  Mars will appear 13.9/3,600ths of one degree across in the sky at that time and will shine at magnitude –1.2.

Mars is small, so it is best observed around opposition when it is closest to the earth and appears at its largest.  Oppositions with Mars occur about every 26 months; however, some oppositions bring us much closer to Mars than others.  This is because of the elliptical shape of orbits.  The distance between Earth and Mars at opposition can vary from 35 million to 63 million miles.  This difference effectively doubles the size of Mars in a telescope.  The table below indicates the most favorable oppositions from now through the year 2052 to view Mars.  At the current opposition, Mars is close to its farthest distance at opposition and only as half as bright as when it is at its closest distance to the earth at opposition.

It was in late August in 2003 that Mars was at its closest approach to the earth and shinning at its brightest than at any other time for the past 73,000 years.  It will be some time before it reaches that magnitude again.

The simulation below is from Astronomy.com showing Mars on March 3, 2012.   Mars will be in the constellation Leo at opposition. 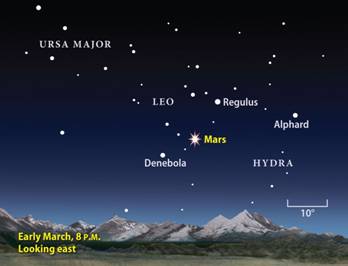 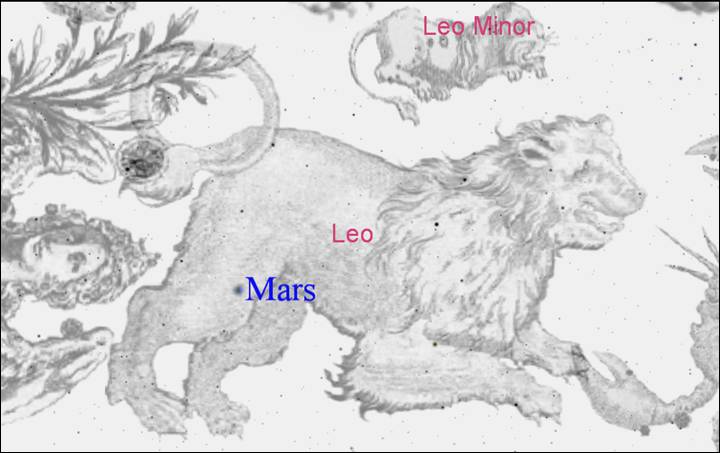 Chart 580 shows Mars (Adom) in the constellation Leo at the time of its opposition on March 3, 2012.   The planet Mars or Adom in the Hebrew, can represent a number of Biblical meanings including blood and war, the atoning blood of Messiah, and Michael the warrior arch-angel.  The main theme for the constellation Leo or Arieh in the Hebrew is Messiah’s consummated triumph.  The Lion is coming down on the neck of the water serpent Hydra (not shown here) the enemy to tear it to pieces.  This represents the final battle in Revelation where the serpent is completely destroyed.

The lion represents the Lion of the Tribe of Judah who is Messiah Yahshuah.  The archangel Michael, here represented by Mars, also has his bouts with the serpent.

Though this will not be a particularly close conjunction, they still should be a beautiful sight to behold.  Nogah is the brightest nighttime star/planet in the heavens, and Jupiter is the second brightest.   They always put on a great show when they are very close or fairly close to one another at the time of conjunction.  Of course, the closer ones are even more glorious, but it should not be a waste of your time to go outside and take a look toward the western horizon an hour after sunset.

Chart 581 shows the planets Zedek (Jupiter) and Nogah (Venus) in conjunction or very near conjunction as seen from Jerusalem at one hour past sunset on March 15, 2012.  This is the closest they can be seen to conjunction from Jerusalem.  It is shown at 6:46 P.M. JST.  The exact conjunction takes place at 7:00 A.M. Eastern Daylight Time which is 1:00 P.M. Jerusalem Standard Time.  Venus would have been closer to the longitudinal line (shown in blue) at that time and would be seen in direct conjunction with Jupiter.  But it has slightly moved past that point as shown on the chart 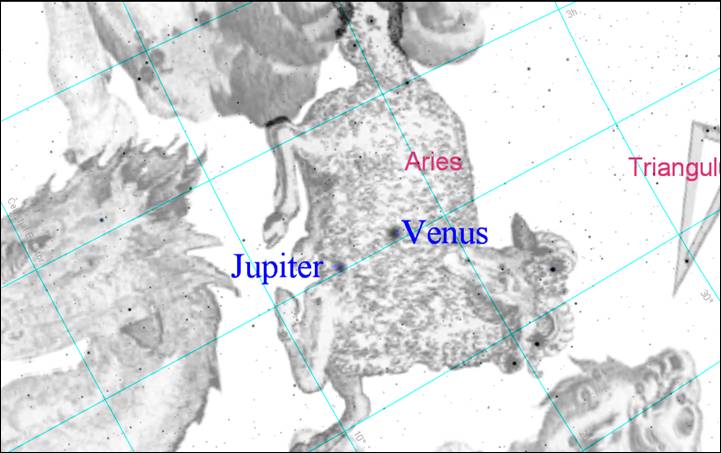 5 hours and 46 minutes later.   The chart is shown zoomed in with the local view.  The planets will appear a bit closer to each other when actually viewing them, though not quite as close as shown on the simulation below.

The simulation below is from Astronomy.com showing the two planets shining brilliantly over the eastern United States in the early evening of March 15, 2012. 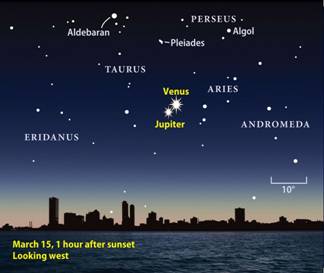 The sun will reach the Vernal Equinox coordinate at 1:14 A.M. EDT on March 20, 2012.  The Vernal Equinox occurs every year around March 20/21.  It can occur between March 19, and March 21, depending on circumstances including leap years.

The Vernal Equinox is the point where the sun crosses the celestial equator moving northwards, about March 20 each year, and is hence the ascending node of the ecliptic.  The vernal (or spring) equinox is also known as the first point of Aries, since it lay in the constellation Aries 2,200 years ago when its position was determined by the Greeks (?).  Since then it has moved into the neighboring constellation of Pisces as a result of the effect of precession.

YAWEH bless you in His abundance of mercy and love through His son Yahshuah. 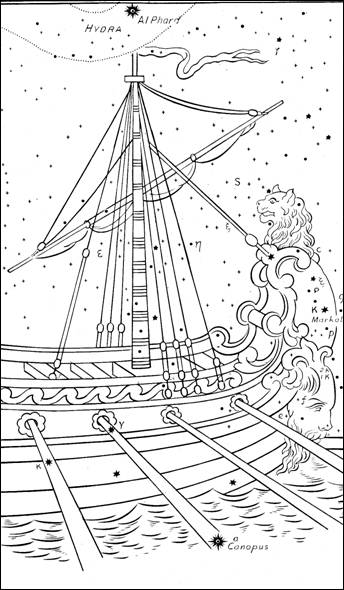 The pilgrims safe at home

Argo is a decan constellation of the Sign Cancer.

Argo (Heb.) – the company of travelers.

Stars in Argo and the meanings of their names

Canopus or Canobus (Heb.) – the possession of Him who cometh.

Markab (Heb.) – returning from afar, the same as Markab in Pegasus.

Other names not identified, are – Sephina, the multitude or abundance; Tureis, the possession; Asmidiska, the released who travel; Soheil (Arabic) the desired; and Subilon, the branch.

The following is from E.W. Bullingers, The Witness of the Stars concerning Argo.

“Whatever fables have gathered round the story there can be no doubt as to its great antiquity. Some think that the story had its origin in name, as well as in fact, from the Ark of Noah and its mysterious journey. All that is clear, when divested of mythic details, is that the sailors in that ship, after all their dangers, and toils, and battles were over, came back victorious to their own shores. The "golden fleece," for which the Argonauts went in search, tells of a treasure that had been lost. "Jason," the great captain, tells of Him who recovered it from the Serpent, which guarded it with ever-watchful eye, when none else was able to approach it. And thus, through the fables and myths of the Greeks, we can see the light primeval shine; and this light, once seen, lights up this Sign and its constellations, so that their teaching cannot be misunderstood.

It tells of that blessed home-coming, when—

"The ransomed of the LORD shall return And come to Zion with songs, And everlasting joy upon their heads;
They shall obtain joy and gladness, And sorrow and sighing shall flee away."   Isaiah 35:10

It tells of the glorious Jason (the Graeco-Judean equivalent of Joshua or Jesus), of whom it is asked:

"For the LORD hath redeemed Jacob, And ransomed him from the hand of him that was stronger than he.
Therefore they shall come and sing in the height of Zion, And shall flow together to the goodness of the LORD."
Jeremiah 31:11, 12

Is not all this exactly in harmony with the rest of this sign? And is not this what is written in the Book?

"Therefore, fear thou not, O My servant Jacob, saith the LORD; Neither be dismayed, O Israel:  For, lo, I will save thee from afar, And thy seed from the land of their captivity; And Jacob shall return and be in rest, And be quiet, and none shall make him fraid, For I am with thee, saith the LORD, to save thee."  Jeremiah 30:10, 11

"Lift up thine eyes round about, and see; All they gather themselves together, they come to thee; Thy sons shall come from far, And thy daughters shall be nursed at thy side, Then thou shalt see, and flow together, And thine heart shall fear and be enlarged; Because the abundance of the sea shall be converted unto thee... Who are these that fly as a cloud? And as doves to their windows? Surely the isles shall wait for me, And the SHIPS of Tarshish first, to bring thy sons from far."   Isaiah 60:4, 5, 8, 9

The whole chapter (Isa 60) should be read if we wish to understand the great teaching of this Sign, which tells of Messiah's secured possessions, the safe folding of His blood-bought flock, the blessed return of His pilgrims, and their abundant entrance into everlasting rest.”   Also read Ezekiel 34:12-16.