Nehemia Gordon from Jerusalem, Israel compiled the following New Moon Report for the month of December 2011 and the beginning of the Tenth Month on the Biblical Calendar.

“On Sunday December 25, 2011 observers from Israel looked for the new moon but it was not sighted. It was raining throughout the country. Visibility would have been uncertain even under ideal conditions so unless another report comes in of a sighting, new moon will be Monday night December 26. My thanks to Yoel Halevi, Devorah Gordon, and David Cachicas for braving the Jerusalem rain to carry out the observation this month in the Holy City.”

The next New Moon is expected to be visible from Jerusalem, Israel near sunset on January 24, 2012 when the moon will be 1.93% illuminated and 14.350 above the horizon at five minutes past sunset.

Every year on or about January 4, the Quadrantid Meteor Show Peaks, and thus it is so this year.  This shower peaks at up to 200 meteors per hour in some years and is not as popular as others of the same intensity because it occurs in the bitter cold of January.  You have to be a diehard observer to go out for a couple of hours to view this shower if you live in the northern latitudes.

Below is and article from Astronomy.com concerning this year’s shower.

The year's first shower puts on a nice show – “The Quadrantid meteor shower reaches its peak the morning of January 4. Although a waxing gibbous Moon will drown out fainter members for much of the night, it sets shortly after 3 a.m. local time, leaving nearly 3 hours to observe under a dark sky. Bad weather can be a problem at this time of year, but those who brave the cold might see a memorable event.

The shower’s peak averages about 120 meteors per hour, but it can produce anywhere from 60 to 200. This range may derive more from the clouds that often plague winter observing, however, than from true variations in the shower. Quadrantid meteors appear to radiate from a point in northern Boötes. Their name originates from the now-defunct constellation Quadrans Muralis, which formerly occupied this region.”

The constellation Quadrans Muralis does not belong to the original 48 constellations of the Mazzaroth.  This region has always been part of the constellation Bootes.  Below is a chart of Bootes with the radiant of the Qauadranids above the sickle.  It is above the area where the peak of the June Bootids occurs. 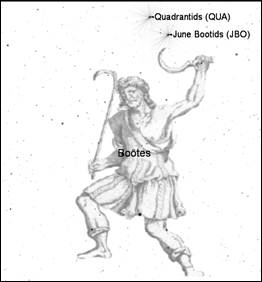 Bootes means He cometh or the Coming One.  Here He is seen reaping the harvest at the end of the this age.

VENUS AND THE CRESCENT MOON

On January 26 there will be a neat sight to see over the west-southwest horizon.  Venus will be shining brightly with the two-day old bright crescent moon closely above it in the constellation Aquarius.  Other than the meteor shower in early January, this is the second highlight celestial event for the month of January. 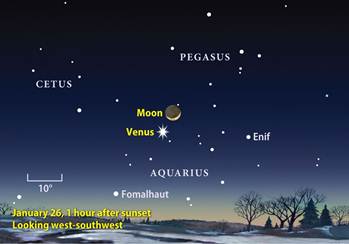 WHAT GOT ME STARTED IN THIS MINISTRY

I became very interested in Biblical Astronomy in 1976 after reading a copy of E.W. Bullinger’s The Witness of the stars (1893).  After that I read other books on the subject as well, including Mazzaroth by Francis Rolleston (1862 & 1865), and The Gospel in the Stars by Joseph A. Seiss (1882).  These are great books on the 48 constellations and their Biblical meanings as well as on the main stars in those constellations and the meanings of the star names.

It was in the late 1970’s to early 1980’s that I became familiar with Dr. Earnest L. Martin and His book The Birth of Christ Recalculated, which was the forerunner of his book The Star of Bethlehem: The Star that Astonished the World.  I was going to college at the time under the G.I. Bill.  This was about one and a half years after finishing my enlistment in the U.S. Marine Corps and then one year of service with a ministry that I was part of at that time.

I had a desire to learn about the physical aspects of Astronomy, which stemmed from my interest in Biblical Astronomy.  I took such courses as basic Astronomy, upper division Astrophysics and Celestial Mechanics.

From that time forth, I kept my eyes on celestial events that might portray the Messiah’s return.  At that time I believed that the Second Coming or Appearing would occur in 2028, or 2,000 years after the crucifixion.  I have learned a lot since then and now believe that it will occur in 2047 or 2,000 years from when the official reaching out to the Gentiles began.

I was subscribed to Astronomy Magazine at the time, as well as now, which shows what celestial events are occurring every month.  I did not have a computer at the time.  It was in July 1993 when I received and read the August 1993 issue of Astronomy that I became very excited after reading a four page article on celestial events coming up in the next 25 years.  It was also the 25th anniversary edition of Astronomy Magazine.

I did a research paper on it (1994) and later a book (1996) and things skyrocketed from there.  I cannot write about everything here, but I thought that you might want to see the article that started it all back in 1993.  So attached is the four-page article from the August 1993 issue of Astronomy Magazine.  There are some events yet to occur included in this article. This is from the gift that Marcia (my wife) gave me, which is a DVD set with all the issues of Astronomy from 1973 to 2010. 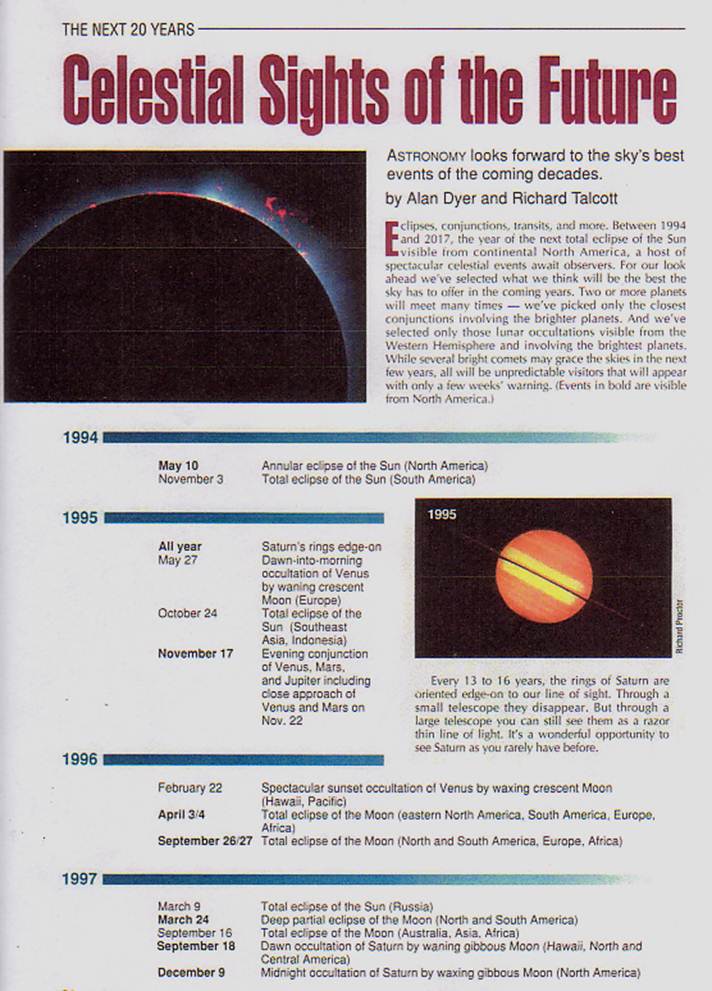 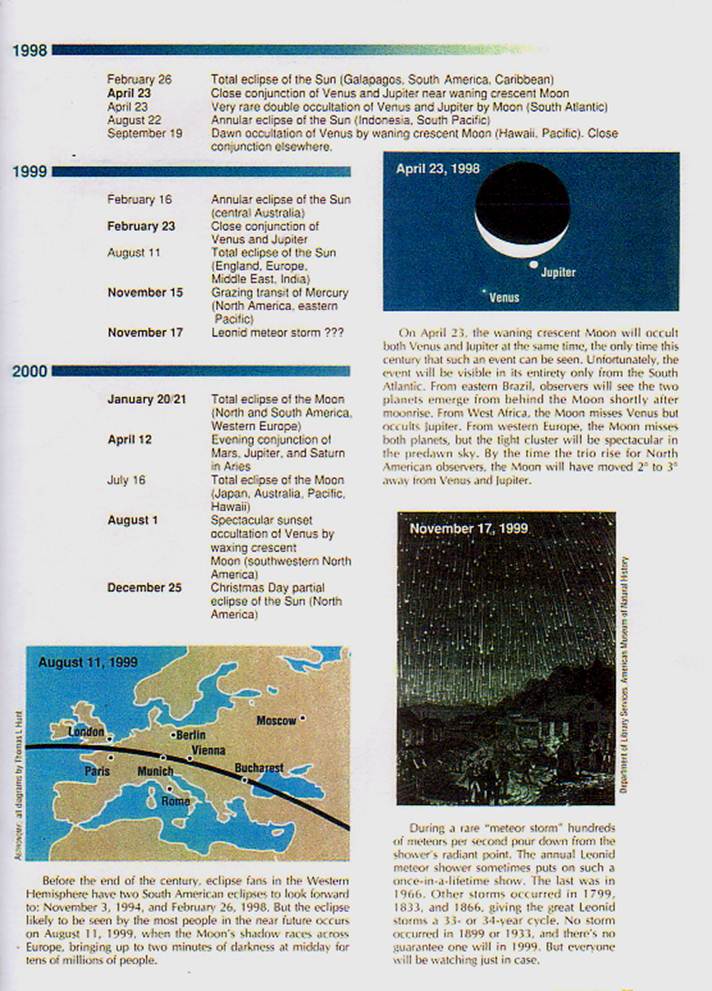 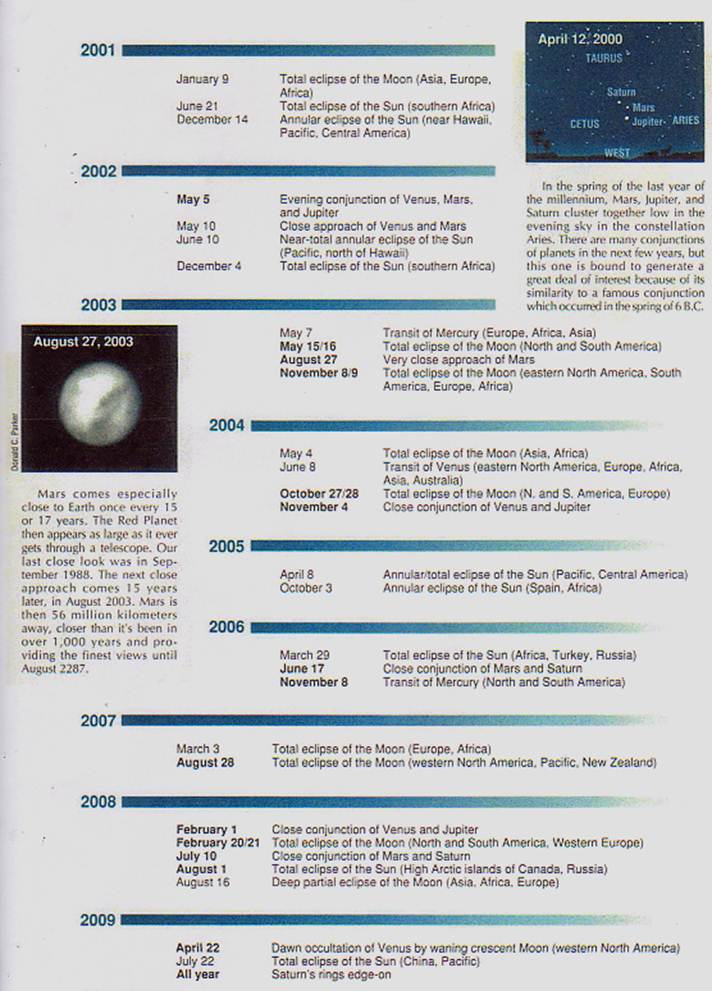 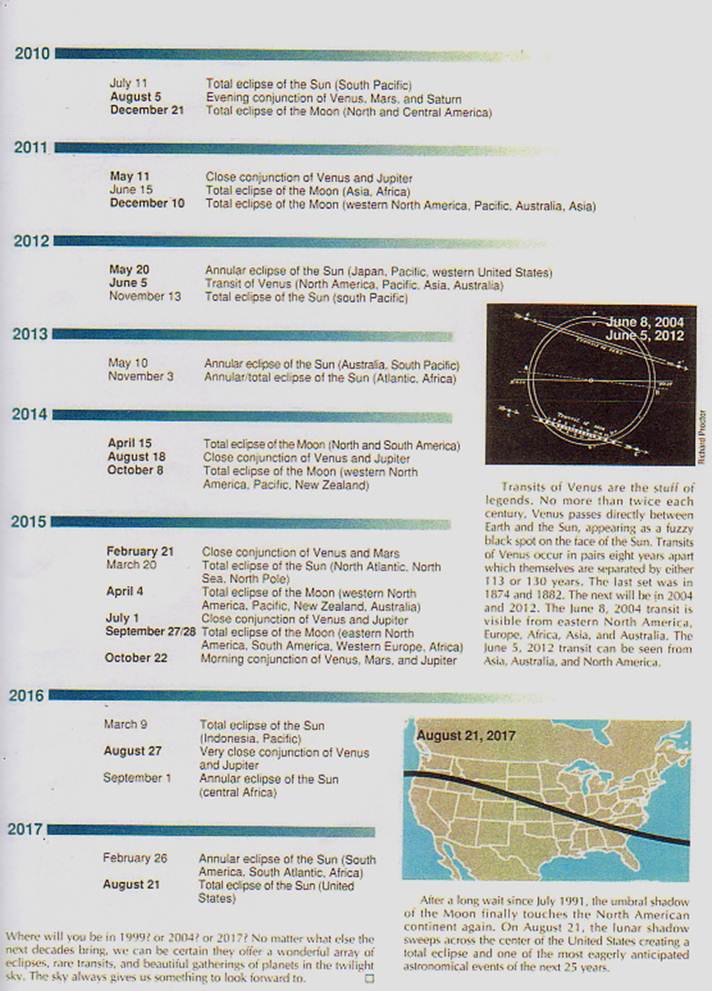