Nehemia Gordon from Jerusalem, Israel compiled the following New Moon Report for the month of May 2012 and the beginning of the Third Month on the Biblical Calendar.

“On Tuesday May 22, 2012 the new moon was sighted from Israel. The moon was first sighted: from Jerusalem by Nehemia Gordon at 7:54pm followed by Yoel Halevi, David Cachicas, Rick Busenbark, Aryeh Levi, Don Henderson, and Lilliana Herrera; from Kiryat Yam by David Varela and Emily Varela at 8:00pm; from Poriya Illit by Devora Boer at 8:05 pm.

My photos of the new moon seen from Jerusalem are posted at the link below.  You can see these photos even if you are not part of Facebook.”

The next New Moon is expected to be visible from Jerusalem, Israel near sunset on June 21, 2012 when the moon will be 4.10% illuminated and 13.090 above the horizon at five minutes past sunset.

There will be a partial lunar eclipse that will be visible from most of the Americas in the early morning hours of Monday June 4, 2012.  The dark shadow of the earth will cover about one-third of the moon at its peak.

Chart 587 shows the position of the moon in the constellation Scorpio during the peak of the eclipse as seen from Portland, Oregon.  Perhaps the sky will be miraculously clear on that morning so I will be able to view it.  I did not get a view of the partial solar eclipse on May 20, when the sun was 85% eclipsed by the earth as seen from the Portland, Oregon area or should I say as not seen because of cloud cover.  There were scattered areas around and through Portland where it could be seen through thinner layers of clouds. 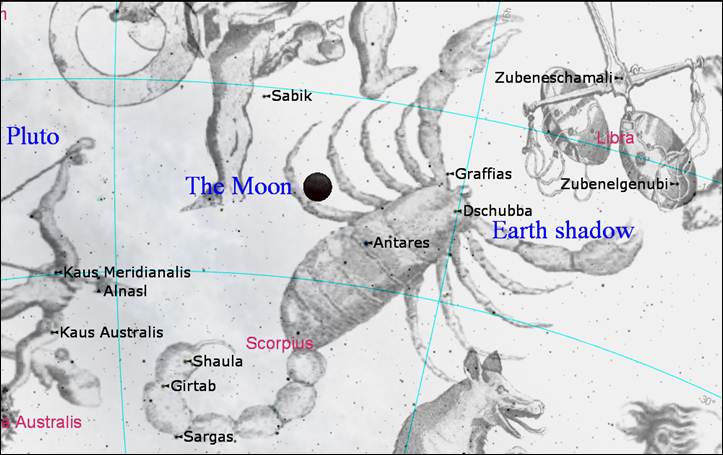 The photo below is a picture of the annular eclipse on May 20, as seen from Albuquerque, New Mexico.  This is a compilation of photos taken at different stages of the eclipse.  The photographer who compiled the photo is Tyler Tate.  I think that Tyler is quite the genius.   I have never seen such a great compilation of photos around the larger photo taken at the peak of an annular eclipse. 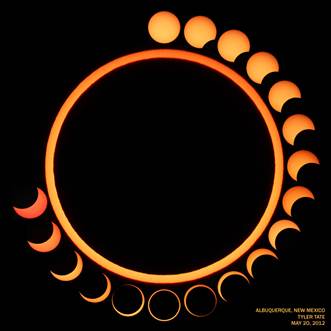 This was not an event that was known in ancient times since it has only been recorded in recent history.  One would have to look at the sun with the naked eye for many seconds to see such an event without the aid of instruments (this is highly NOT recommended, since a few seconds of staring at the sun without protection can cause permanent, irreversible, eye damage).  And one would have to know when such an event was to occur.  This event was not known of until about three or four centuries ago through calculations, and special instruments were made to view it.

The diagram below shows the position of Venus in front of the sun near the peak of the transit on June 5/6, 2012 as seen from Portland, Oregon. 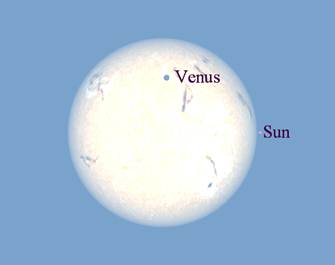 After Nogah transits the sun, it will be on the morning side of the sun again.  It should appear in the morning dawn before sunrise above the east-northeast horizon around mid-June, depending on your latitude.

The chart below shows the position of the sun and Nogah in the constellation Shur (Taurus) at the time of the transit.  The main theme for the sign Shur is Messiah, the coming Judge of all the earth, coming to judge and destroy his enemies and to set up his kingdom upon the earth. 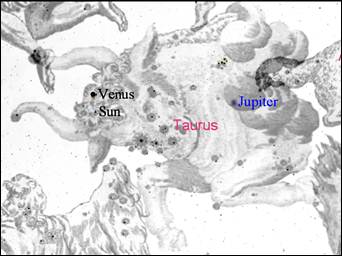 As you can see on the chart, the sun and Venus are just in front of the forehead of the reem and between its two horns.  The reem is rushing forward in its wrath.  Both Venus and the sun are in the large dot just to the left of the label for Venus.

As a tribal symbol, Shur represents the tribe of Joseph with the two horns representing Manasseh and Ephraim (Deut. 33:17).  Here, the sun (the Bridegroom going forth) and Nogah (the bright and morning star) are in the midst of these two horns, or, concerning the Two Houses, in the House of Ephraim at the time of the transit.

One interesting note is that the position of the sun in this area of Taurus during this event may also stir up sun-god worshippers.  It was in 3500 BC that the sun was in this area during the Vernal Equinox and the sign of the bull with the sun between its horns carried over to the ancient Egyptian sun god Hathor.  See the March/April 2004 issue of Biblical Astronomy for further information on this.

Charts 589 and 590 show the times for the different stages of the transit as well as what areas on Earth the transit will be visible from. 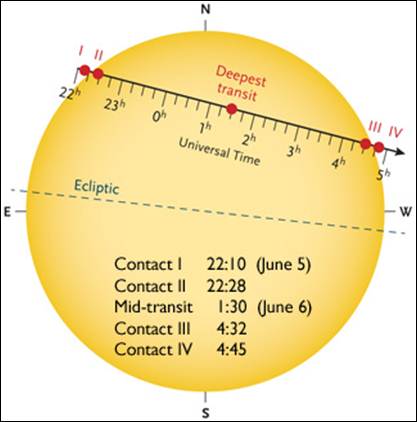 Chart 589 – Times in Universal Time for the transit of Venus across the face of the sun.  Subtract 4 hours for EDT, 5 hours for CDT, 6 hours for MDT and 7 hours for PDT.  UT is not in daylight savings time.  22:10 is the same as 10:10 p.m., 1:30 is 1:30 a.m., etc.   Venus will take about 6 hours 30 minutes to cross the northern side of the Sun. The line is plotted as seen from Earth's center. Universal Times (also geocentric) are given for the event's four contacts: I and II as Venus moves onto the Sun (called ingress), III and IV as it leaves (egress) and for Venus's deepest encroachment onto the solar disk.

Chart 590 - Areas where the transit will be visible from.  For most of North America, the transit of Venus will begin on the afternoon of June 5th and still be in progress at sunset. Those in western Pacific, eastern Asia, and eastern Australia see the whole show from beginning to end on June 6th (local date).

If you wish to view this event, you can check out hobby or science and Astronomy novelty stores in your area to see if you can get some filtered viewing glasses that are made specifically for viewing solar events.

The following are some unique celestial events that may be worth taking a look at.

Crescent Moon and Jupiter – On June 17, there will be a bright crescent moon just beneath the planet Jupiter in the early morning sky. The simulation below shows that event at 30 minutes before sunrise. 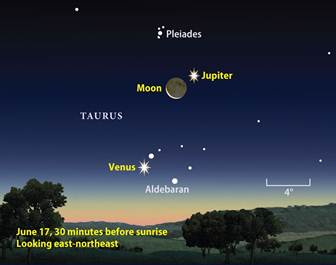 Summer Solstice – The sun will reach the summer solstice coordinate at 7:09 p.m. EST on June 20, 2012 ushering in the first day of summer.

Neat line-up of Aldebaran, Venus, Jupiter and the Pleiades from late June to mid July. 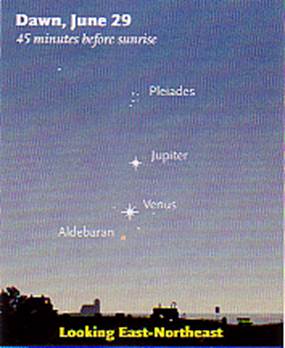 At the very least it will be a great sight to see in the early morning sky each morning from one hour to thirty minutes before sunrise.  A bright crescent moon joins the group in mid July when the crescent moon, Jupiter, Aldebaran and Venus form a tight, spectacular quadrangle.  And as seen from Europe in the early morning before sunrise on July 15, the moon will occult Jupiter.  It will be visible from Israel after sunrise with the aid of optical instruments.

Through all the alignments and massings of these celestial bodies from late June to mid July, Venus will be shinning at its brightest at a magnitude of –4.7.

The annual Bootid Meteor Shower will peak this year in the early morning hours before sunrise on June 27.

Below is a simulation of the event from Astronomy.com showing the radius in or very close to the astronomical line-drawing of constellation Bootes.  It is within the constellation borderlines. 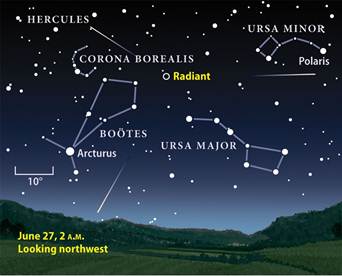 Chart 588 shows the radiant just above the sickle in “the reaper’s” left hand. 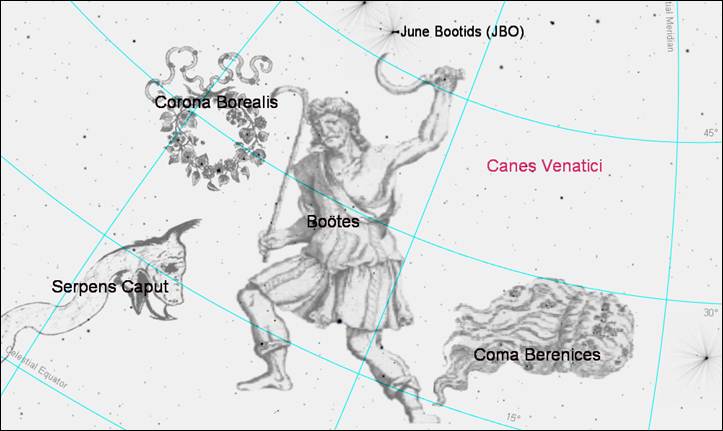 Chart 588 – The radiant of the June Bootids Meteor Shower, above the sickle in the “reaper’s” left hand.

The following is an article from Astronomy.com concerning this year’s Bootid Meteor Shower.

Catch the slow-moving meteors of Bootes

“The typically minor June Bootid meteor shower occasionally has delusions of grandeur.  After decades of inactivity, the shower returned in force in 1998, when observers witnessed up to 100 meteors per hour.  Rates about half that high appeared in 2004.  Although astronomers aren’t predicting an outburst this year, veteran viewers will keep their eyes to the sky for a few days around the Bootids’ June 27 peak.

Observing conditions should be excellent.  The First Quarter Moon sets shortly after midnight, leaving the prime hours before dawn Moon-free.  The meteors appear to emanate from a point, called the ‘radiant,’ in the northern part of Bootes the Herdsman.  These cosmic vagabonds stand out because they move so slowly, entering Earth’s atmosphere at ‘only’ 11 miles per second.”

The name Boötes means He Cometh, and represents Messiah Y’shua (Christ Jesus) and is the portrayal of Revelation 14:14-16 – “And I looked, and behold, a white cloud, and upon the cloud One sat like unto the Son of Man, having on His head a golden crown, and in His hand a sharp sickle.  And another angel came out of the Temple, crying with a loud voice to Him That sat on the cloud, ‘Thrust in Thy sickle, and reap: for the time is come for Thee to reap; for the harvest of the earth is ripe.’  And He That sat on the cloud thrust in His sickle on the earth; and the earth was reaped.”

So here we have sparks (meteors) flying from the sickle.  Perhaps it is getting sharpened for the Great Harvest.  See the February 2006 issue of Biblical Astronomy for more info on Boötes.

At any rate, if you wish to subscribe to the upcoming subscription year (July 2012 to June 2013) please do so from the Biblical Astronomy Website at www.biblicalastronomy.com  You can either pay through PayPal or send a check or money order for $12.00 for the online subscription to:

If you want to order the postal version of the newsletter, the cost is $25.00 if you are in continental United States; $30.00 for Hawaii, Alaska, and Canada;  $35.00 for overseas.  Postal subscribers can view the online newsletters at no extra cost. Please send me your e-mail address so I can send you your password if you wish to do so.

I need to do the subscriptions this way in order to keep the cost of the newsletter down.  It would cost too much to go to an automated system and it would also cause complications in the way things are done.  I would have to change the cost of the newsletter to $24.00 per year to cover the extra expenses.  The subscription base is not large enough to support such a system.  There are a little over 200 subscribers from all over the United States and the world.

The $12.00 that online subscribers paid this past year gave them access to all the newsletters from July 2012 to June 2013 no matter when in the year they subscribed before March 1.  If you subscribed on or after March 1, then your subscription will be extended to the end of the next subscription year.  If you subscribed before March 1, then you will need to re-subscribe in July.  If I use an automated system, the subscription cost would be $24.00 per year.  So even if you pay a little extra in the beginning, you will only be charged $12.00 per year for a full year from there on out. I hope this explains it to your understanding.

YAHWEH bless you richly in His grace and love.