We found two fields of Aviv barley in the northern Negev at Bit'cha and Gama Junction. This means the next new moon expected on March 23 will be the beginning of the new biblical year and Chag HaMatzot (Feast of Unleavened Bread) will begin two weeks later at sunset on April 6. However, visibility of the new moon from Israel is uncertain for March 23. If it is not seen that night the new biblical month will begin Saturday night March 24 and Chag HaMatzot will begin at sunset on April 7.”

Photos of the Aviv barley are posted at:

Nehemia Gordon from Jerusalem, Israel compiled the following New Moon Report for the month of March 2012 and the beginning of the First Month in the New Sacred Year on the Biblical Calendar.

“On Friday March 23, 2012 the new moon was sighted from Israel. The moon was first sighted:  from Jerusalem at 6:14pm by Nehemia Gordon and shortly thereafter by Keith Johnson and Jocelyn Carabello; from Aviel at 6:16pm by Chad and Barbara Peterson and Ephraim Frank;
from Poriya at 6:20pm by Willie Ondricek and about ten others; from Givat Hamoreh by Dina Marcus at 6:22pm and shortly thereafter by Avi Marcus.

Earlier in the day two fields of Aviv barley were located in the Jordan Valley, one north of Marj e-Naja and the other at Tal Malkoach. Yesterday two other fields of Aviv barley were located in the northern Negev. This makes the current new moon Chodesh Ha-Aviv, the new moon of the Aviv, which marks the beginning of the new Hebrew year, in accordance with Deuteronomy 16:1 "Observe the new moon (chodesh) of the Aviv." Chag HaMatzot (the Feast of Unleavened Bread) will begin at sunset on April 6, 2012.”

Photos of the Aviv barley found in the Jordan Valley and the new moon sighted from the Mount of Olives are posted at:

The next New Moon is expected to be visible from Jerusalem, Israel near sunset on April 22, 2012 when the moon will be 1.51% illuminated and 12.570 above the horizon at five minutes past sunset.

There is a list of all the New Moons from March 2012 to March 2013 on the next page.  You can use these dates to make your own Calendar.

The figures below represent the illumination of the moon (% ill.) and the degrees above the horizon (0 ah) the moon is at five minutes past sunset.  There are some borderline situations below.  The first date is the date I lean toward for the New Moon being spotted with the unaided eye.  The date in parenthesis is my secondary choice.

Day of the Wave Offering – April 8th during the day.

NOGAH (VENUS) IN THE PLEIADES

Every eight years to the day (in this present epoch) the planet Nogah (Venus – the bright and morning star) begins to enter a retrograde path that takes it well above the ecliptic (the path that the sun, moon, and planets move through the twelve signs) and into the star cluster the Pleiades (Job 9:9 and 38:31 – Heb. Kemah), which are also called the seven stars (Amos 5:8 – Heb. Kemah).  From ancient times the Pleiades have also been known as the seven sisters.  These are also the seven stars representing the seven angels of the seven assemblies of Revelation 1:16, 19.

Every eight years to the day and time in the evening sky, Venus is very close to the same position it was in eight years previously.  It was in 1996 that I first wrote of this in my book A Voice Crying in the Heavens.  It was on the evening of April 3, 1996 (as seen from Jerusalem), during Passover, that Venus was in the Pleiades just hours before there was a Total Blood Red Eclipse of the moon in the constellation Bethulah (Virgo).

At the time in the early evening when Nogah was seen in the Pleiades, the comet Hyakutake was also seen in the evening sky, still very visible to the naked eye.  It was in the constellation Perseus.  See the March/April 2004 issue of Biblical Astronomy for much further insight on those events at: www.biblicalastronomy.com/04Mar.htm

Every eight years when Nogah is in this cycle, it is shining at its brightest between March and April.  This year it will reach its peak brightness of –4.7 on April 30.  It is a real nice sight to behold.

This year, the planet Zedek (Jupiter) will join the show in the early evening sky on April 2, as seen from the United States (or, April 3 as seen from Jerusalem and other sites in that vicinity on planet Earth). 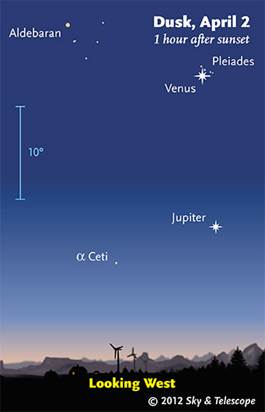 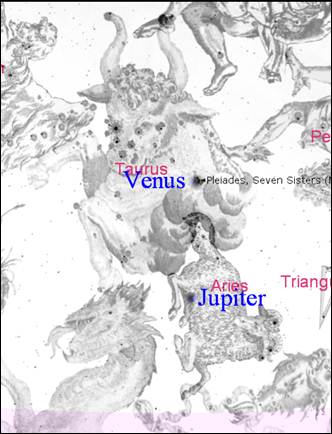 You can also find more information on this event with the Biblical meaning of the Pleiades and Nogah as it occurred in 1996 with charts of the event and the eight-year cycle of Nogah on the third DVD in the Biblical Astronomy DVD set.  If you do not have the DVD set, you can order it from the Products section on the Biblical Astronomy Website at: www.biblicalastronomy.com/biblical.htm  It is a must have.  The newsletters mostly serve as addendum to the DVD set.

The planet Saturn will reach opposition, its closest approach to Earth for the year, on April 15, 2012.  It will be shining at its greatest magnitude for the year at magnitude 0.2 in the constellation Bethulah (Virgo).

In its portrayal of the conflict between the woman and the woman’s seed against the serpent and the serpent’s seed, the planet Saturn represents Satan.  Here we have Saturn shining at its brightest for the year on a day we know all too well here in the United States.  I still need to do mine.

The chart below shows the planet Saturn in the constellation Bethulah (Virgo) at the time of opposition on April 15, 2012.  Bethulah is rising in the East. 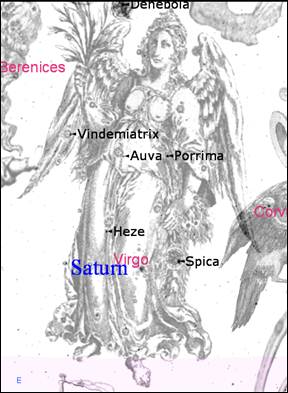 The following article on the Lyrid Meteor Shower is from Astronomy.com

“Barring bad weather, early January’s Quadrantid shower gets the meteor-viewing year off to a rousing start. But then the sky settles down for a long winter’s nap. The longest meteor drought of the year doesn’t end until the Lyrid shower picks up in mid-April.

This shower remains active from April 16 to 25 but climbs to a fairly sharp peak the night of April 21/22. Under a clear, dark sky, observers typically spot about 20 meteors per hour at the peak. (Although rates have spiked as high as 90 per hour, that hasn’t happened since 1982.)

Conditions this year should be ideal. New Moon occurs April 21, so our satellite’s glare won’t be around to cause interference. The meteors appear to radiate from the constellation Lyra, which lies in the northeastern sky in late evening and passes nearly overhead shortly before dawn.”

The chart below shows the radiant of the Lyrid Meteor Shower near the star Vega in Lyra. 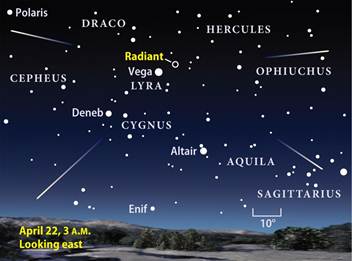 When I see meteors shoot forth from Lyra I think of praises going forth before Him and to Him.

NEW BRIGHT COMET ON ITS WAY

A new comet was discovered in early June 2011 by the newly activated PAN-STARR telescope and early warning system.  The article on the comet below was posted on Astronomy.com on March 30, 2012.

“A year from now, it is possible that "comet fever" will be running high when a newfound comet emerges into view in the evening sky. But while some scientists have high hopes for a spectacular 2013 sky show by the comet, it is still far from certain.

When astronomers at the University of Hawaii at Manoa announced last June that they had discovered the new comet, it was a distant and inconspicuous object. But preliminary calculations at once made it clear that this new object had the potential to become a naked-eye object of considerable interest for skywatching enthusiasts in the Northern Hemisphere. The comet may ultimately shine as bright as some of the brightest stars in the night sky, but will likely pale in comparison to the brilliant planet Venus.

The comet was christened C/2011 L4 (PANSTARRS). Comets are usually named after their discoverers, but in this case a large team of observers, computer scientists, and astronomers was involved, so the comet was named after the telescope.

PANSTARRS stands for Panoramic Survey Telescope And Rapid Response System. It's a 1.8-meter prototype for a quartet of military-funded telescopes that astronomers hope to build on the lip of the extinct volcano Haleakala.”

This comet may reach the magnitude of comets Hyakutake and Hale-Bopp when it reaches its brightest Magnitude next March.  Though it will most likely not be seen as bright by the unaided eye.  Comets Hyakutake and Hale-Bopp were high in the evening sky well into the night and seen under ideal conditions with very dark skies.  Comet PANSTARRS (C/2011 L4) will be fairly close to the horizon shortly after sunset and the light of the setting sun will block much of the comet’s brightness.  It should still be a very interesting celestial event though.  The path of the comet is of great interest.

The comet will pass closest to Earth on March 5, 2013 at a distance of 1.1 astronomical units (102.3 million miles) and is calculated at this time to be around magnitude –0.5 at that time.  The calculation for the magnitude could change by then.  The comet may be dimmer or brighter.  It will be near the distance that comet Hale-Bopp was at its closest approach to Earth.  It will be further from the earth than the sun is, but is large enough to put on a great show.  The comet will be closest to the sun on March 10, 2013 at a distance of 0.3 astronomical units or 27.9 million miles.

Chart 582 shows the lineup of the planet Adom (Mars), the comet PANSTARRS, and the first crescent new moon of the month of the Aviv on March 13, 2013.  Though this is a real nice alignment, it is shown here at ten minutes past sunset.  The sky will most likely be too bright over the western horizon to see Mars and the comet with the unaided eye.  As the clock ticks on, the celestial objects head closer to the horizon and finally out of sight.  The estimated, calculated magnitude of Comet PANSTARRS at that time is 0.71 or of the first magnitude. 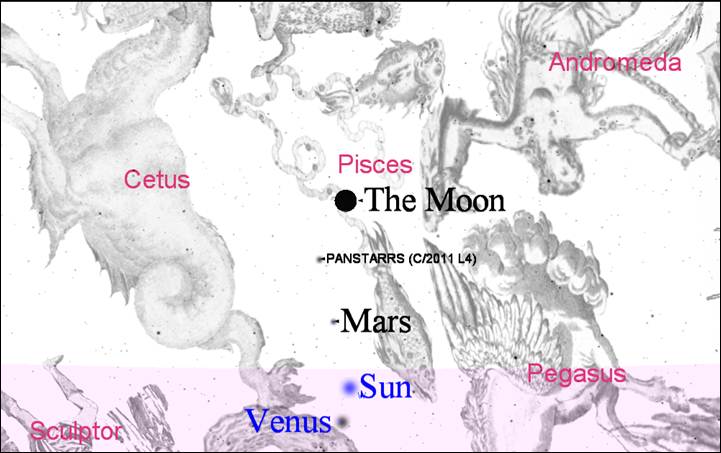 Chart 583 shows the path of Comet PANSTARRS (C/2011 L4) from March 13 to April 5, 2013.  The comet will be getting a bit dimmer as each day passes by.  The reddish dots on the path of the comet are in one-day increments.  The space between the first dot and the second dot is from  sunset March 13 to sunset March 14.  That will  also most likely be the first day of Aviv on the Biblical Calendar.  You can find where the comet is during the week of unleavened bread by starting there and counting up to the 14th and 15th day of Aviv and then on to the 21st day of Aviv.  It is nice how that works out so you can see where the comet is on each day of the Biblical month.  The space between the dots shortens as the days go on and the comet gets further from the earth.  It appears to move faster when it is at its closest distance to the earth.

I do not have the space to cover all of what I want to cover here, but we have a year to cover all that can be covered about this comet.  For now, compare the  path of this comet through Andromeda during the week of Unleavened Bread to Comet Utsunomiya on Chart 262 in the May 2002 issue of Biblical Astronomy during the infamous “Passover Massacre” that occurred at that time. 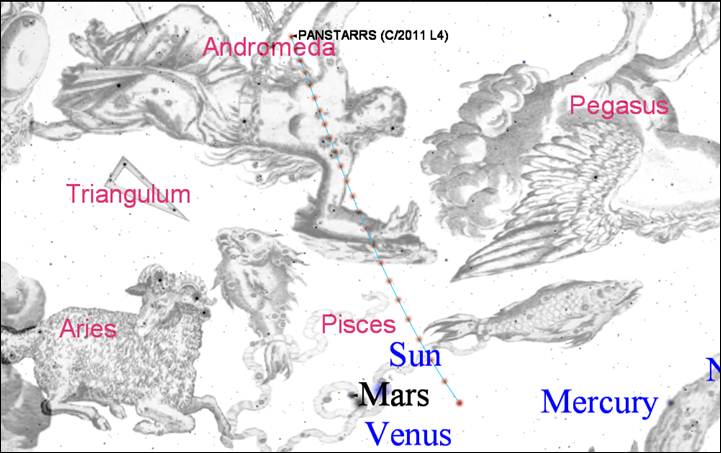