Nehemia Gordon from Jerusalem, Israel compiled the following Barley Reports on March 11 and 12, 2012.

Aviv Search, Day 1 – “Today (March 11, 2013) we found two fields of Aviv Barley near Gama Junction in the Northern Negev. The first field was 6-row domesticated the Northern Negev, while the second was 2-row wild barley.”

Both fields had large quantities of Aviv Barley. I posted photos of the barley on Facebook at: https://www.facebook.com/NehemiaGordon 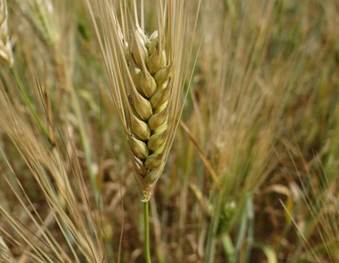 Aviv Search, Day 2 - On the second day of the Aviv Search (March 12, 2013) we found more Aviv Barley in the Jordan Valley.  We examined one field at Nachal Firan that was 100% Aviv.

The coming new moon will be Chodesh Ha-Aviv - the New Moon of the Aviv. We will look for the new moon tonight in Israel. With 0.90% illumination and 47 minutes lagtime visibility is unlikely on Tuesday Night.  If the moon is not visible from Israel on Tuesday night, the Biblical year will begin on Wednesday night.”

Nehamia Gordon from Jerusalem, Israel compiled the following New Moon Reports for the months of March and April 2013 and the beginnings of the First and Second Months of the New Sacred Year on the Biblical Calendar.

New Moon of the Aviv – “On Wednesday March 13, 2013 the new moon was sighted from Israel. The moon was first sighted from Jerusalem by Devorah Burnett at 5:41 pm and shortly thereafter by Devorah Daniel, Jono Vandor, Jeremy Childs, and Nehemia Gordon; from another location in Jerusalem by Willie Ondricek at 5:50 pm; from Kefar Eldad by yoel Halevi at 5:52 pm; from Tel Aviv by David Cachicas, Daniela Cachicas and Gabriel Cachicas at 6:30 pm.

Wednesday’s sighting marked the beginning of the First Month of the Hebrew year.  Chag HaMatzot the Feast of Unleavened bread will begin at sunset on March 27, and will continue until sunset on April 3, 2013.

I posted photos of the new moon from Jerusalem on Wednesday March 13, 2013 at:https://www.facebook.com/NehemiaGordon

My photo of the new moon from Jerusalem is posted at: https://www.facebook.com/NehemiaGordon

The next New Moon is expected to be visible from Jerusalem, Israel near sunset on May 11, 2013 when the moon will be 2.39% illuminated and 14.430 above the horizon at five minutes past sunset.

I sincerely apologize for being extremely late in getting this newsletter posted.  I have been blasting many fruits and vegetables in my new Nutri-blast and am feeling a lot better now and I am regaining my strength.  I had lots of rest but still have much difficulty at sitting at the computer for more than 30 minutes at a time.  It is very painful at times to sit at the computer at all, which greatly affects my concentration.

I was beginning to seriously think if I would be able to do this for another year or so.  I sought  our heavenly Father on this and was given the prophecy to keep going and that it was very important that I do so.  I was relieved to hear that.  Since the Almighty be for us, who can be or stand against us.  Messiah went through a great deal more pain than I have been going through of late to save me.  I can go through a little to serve Him.  Thank you for all of your enduring patience.  I didn’t receive any complaints from any subscriber over the past couple of months.  I hope to have the May newsletter done by mid-month. We will see what happens. I had to combine the newsletters again this month.

COMET PANSTARRS AND THE NEW MOON OF THE AVIV

Though it was not as bright as first anticipated, Comet PANSTARRS put on a great show in mid-March.  It was still a comet of the first magnitude and was such when it was next to the New Moon of the Aviv on March 12, 2013.

This comet is most interesting because it arrived near and on the New Moon of the Aviv and was still visible during Passover and the Week of Unleavened Bread.  Since its arrival there have been many incidents of violence throughout the world, though not much above normal, at least normal for these days.  A new Pope was selected on the New Moon of the Aviv, Obama visited Israel shortly after, and other incidents that were newsworthy.  It is difficult at best to put all of this in perspective at this time.  But I can see the wheels of speculation beginning to turn and pick up speed.  Again, we will just have to wait to see what happens.

Below are some photos of the comet and the new moon as seen from two locations in the United States.  The photo below was taken from Las Vegas on March 13 with the comet seen to the left of the crescent moon. 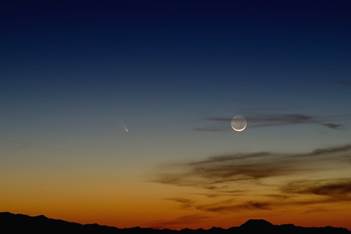 The photo below is a great picture of the comet by itself.  It was taken from Henderson, NV on March 11.  The comet is about a half a magnitude brighter here and is not in the solar glare.  This is my favorite photo of the comet itself. 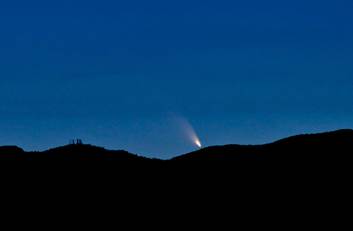 Chart 606 shows where the comet will be in the dusk sky from March 20 to May 31, 2013.  Though it will become too dim to see even with binoculars soon. 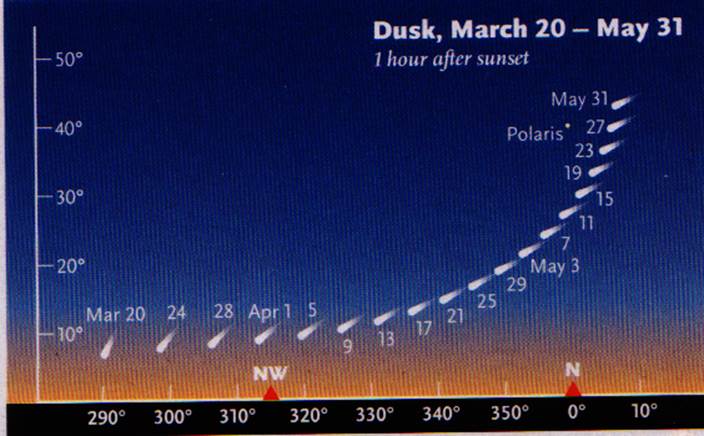 Chart 607 shows the path of Comet PANSTARRS from March 13 to April 5, 2013.  The comet passed through the constellation Andromeda at that time.  Andromeda represents Israel in bondage to the beast from the sea.  Recent worldly events may be working up to that scenario. 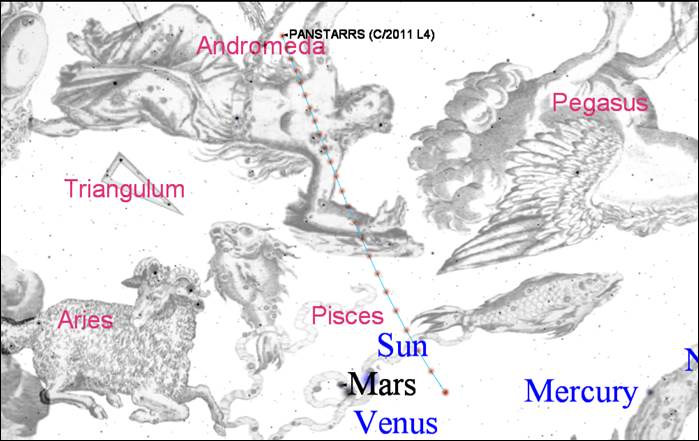 There was a partial lunar eclipse that was visible from Israel and most of the Old World on April 25, 2013.  This eclipse was not visible from the United States.  The shadow of the earth only covered less than 1% of the moons surface.  It was a very minor eclipse and most likely not noticed by many.  I would not consider this a big sign.

Chart 608 shows the position of the moon at the time of the peak of the eclipse as seen from Jerusalem near the feet of Bethulah (Virgo). 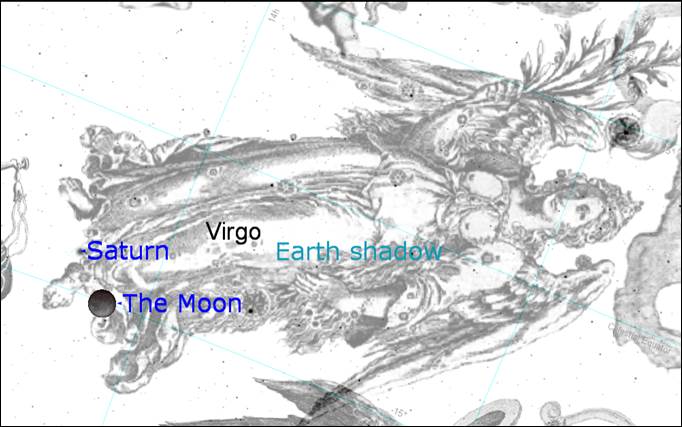 Chart 608 – The position of the moon in Virgo at the time of the partial eclipse on April 25, 2013 as seen from Jerusalem.  The moon reached conjunction with Saturn about 6 hours later.

Saturn reached opposition (its closest approach to the earth for the year) and was shinning at its brightest magnitude for the year at 4:00 a.m. EDT on April 28, 2013. Saturn was in the constellation Virgo at that time. 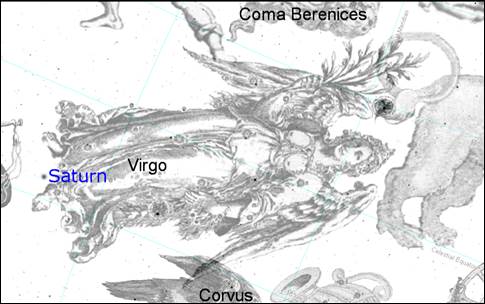 Saturn in Virgo at time of Opposition

It is that time of the year again for the Eta Aquarid Meteor Shower.  This year shows some promise of a real good show.  The sky will be free of moonlight before morning twilight begins at the peak of the shower on May 6.

The debris stream of this shower comes from Halley’s Comet.  It is best to observe the meteors from about 3:00 a.m. to when twilight starts to interfere.

For residents at mid-northern latitudes, the low radiant (which is in the constellation Aquarius) reduces the meteor count to about one-third the maximum rate of 55 meteors per hour.

The chart below shows the radiant of the shower in the constellation Aquarius. 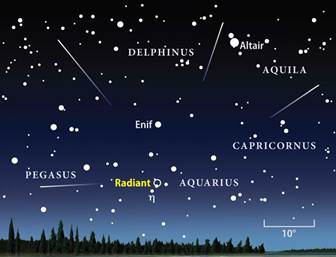 The major theme of the Sign Aquarius is Their blessings ensured, or, the living waters of blessing poured forth for the redeemed.

There will be an annular solar eclipse that will be visible from parts of Australia on May 9/10, 2013.  This will be seen as a partial eclipse from Hawaii and other parts of the Pacific.  The partial eclipse will cover a good portion of the sun. 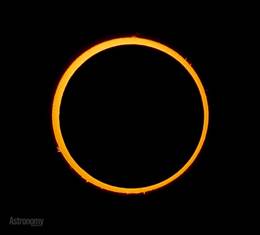 Chart 609 shows the positions of the sun and the moon between the constellations Aries and Taurus at the time of the eclipse as seen from eastern Australia at 9:50 a.m. on May 10, 2013. 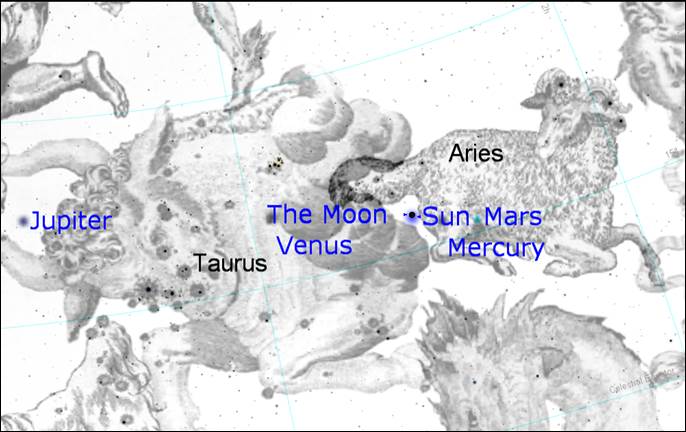 Chart 609 – The position of the sun and the moon in the constellation Aries during the Annular Eclipse of the sun as seen from eastern Australia on May 10, 2013.

The figures below represent the illumination of the moon (% ill.) and the degrees above the horizon (0 ah) at five minutes past sunset.  There are some borderline situations below.  The first date is the date I lean toward for the New Moon being spotted with the unaided eye.  The date in parenthesis is my secondary choice.

The new moon on August 8 is 7 degrees above the horizon, which is not the minimum 8 degrees that I usually use for the lowest limit above the horizon at five minutes past sunset.  But the illumination of the crescent that evening will be 3.14%.  It is in the hot month, which will produce more particulates in the atmosphere.  Weighing the factors for and against the possibilities is about even.  I believe there is a good chance of visibility that night (August 8), but it may not be seen until the next evening.  The two possible new moons on January 31, 2014 and March 31, 2014 are a bit low in illumination but not far from 1%, and the elevation above the horizon is in a good range.  There is a slight possibility that the thin crescent will be visible on those cold and cool evenings.  However, this will produce somewhat of a problem.  If it is visible on those evenings, then there will be 31 days in one or both of those months.  Of course, I have seen no law where there can be no more than 30 days in the Hebrew month.  We will see what happens.

YEHOVAH bless you richly in his love and grace.